What Seed Biology Can Teach Us About Shared Survival 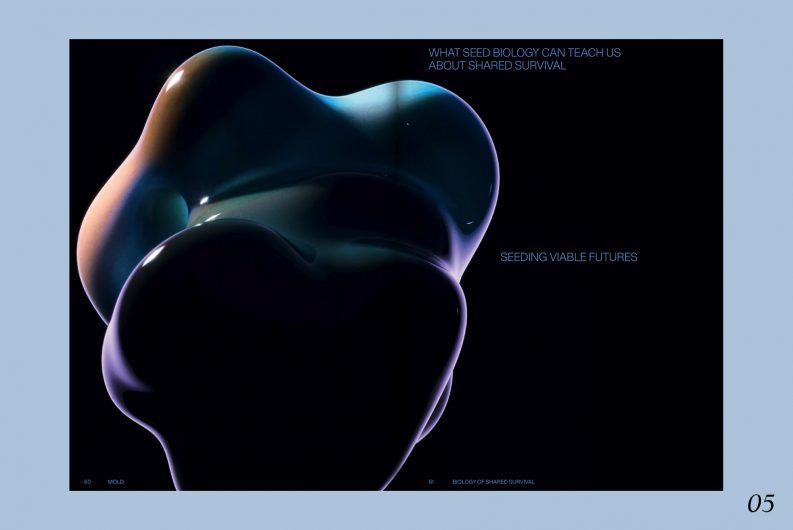 Pre-order your copy of SEEDS, MOLD Magazine Issue 05 here for a pre-order price of $18USD. Expected ship date is March 1.

Seeds are capsules of potential: packets of the raw materials needed to generate new life in an uncertain future. In the flinty, aspirational way that only evolution can design, the seed anticipates unwelcoming conditions, competition and a long journey before finding a safe haven. Biology, in its timeless struggle with our unyielding and stoney planet, has hedged her bets with the generosity of plant reproduction and the support systems wired into every seed. Nature knows that fertility and habitability are transient states on Earth, and if those conditions existed once, they will exist again. Nature’s expectation is not that every seed will fall on fertile ground, but that by investing nourishment and shared strategy in a diverse multitude of seeds, the seeds themselves may potentiate fertility.

Long before mammals appeared on Earth, plants and their seeds ruled. That is, in a literal, evolutionary sense, human societies evolved amidst an established world of plants, learning from them and creating wisdom from what plants revealed. In the palms of worried people, fearful of a future in which scarcity determines how we support others, how we plan our meals, and how proximate we are to death, seeds begin to resemble precious stones to gather and save. Through their biological programming and co-evolution with the human experience, humans may also view seeds as blueprints for building liveable futures. As society trembles at the threshold of a dark corridor, seeds may teach us how to lovingly persist.

By weight, the largest part of most seeds is called the endosperm. It is a dense, internal pouch of nutrition that is packed next to the cotyledon, a tiny, not-yet-emerged plant. Surrounding these essential parts is a protective capsule tough enough to withstand physical damage, chemical degradation and, in some cases, long periods without water, nutrition or light. Together, the anatomy of a seed may appear to be a kind of wish through which each seed could one day be an entire plant that goes on to bear more seed. The anatomy of the seed provides evidence that biology makes this wish every time a seed develops, especially because the cost of building seeds is not cheap. Each seed that a plant produces represents one of the largest investments of resources, like the sugar produced with help from the sun and nitrogen absorbed from fertile soil, that a plant makes in its lifetime. While each generation of a plant is a reflection of the investment that the previous generation packed into every endosperm, each generation is also an iteration of biology’s resilience.

The evolution of seed-bearing plants occurred in environments that were entirely ambivalent to the plants’ successes or failures. Sir Charles Darwin, a white British naturalist who was among the first to describe and name this process “natural selection,” or evolution through adaptation, learned about it through seeds. In addition to the well-known Galapagos finches, Darwin looked closely at what makes seeds able to survive before sprouting. He was curious about persistence—how different seeds could fare in tough situations, like being transported across a salty ocean before emerging on a distant shore ¹ ². What Darwin noticed about seeds is the means by which they are prepared for a future environment that is unknown. The experiences of the previous generation, both harrowing and promising, represent a type of learning that only happens through cohorts of shared wisdom. Seeds, like people, would be woefully unprepared for the world ahead without the relationship that exists between the past and the present.

Uncertainty is the constant drum beat of biology, but the chaos of nature is attenuated by one thing only: relationship. This truth is sharpened in the light of our uncertain human future. Despite the significance of seed resilience in his work, Darwin’s “survival of the fittest” concept became the favored metaphor for justifying human oppression. Through this logic, the tragedy of the commons is an inevitablity. Charles Darwin and his contemporaries Alfred Russell Wallace and Herbert Spencer debated which term better describes how species evolve: natural selection or survival of the fittest. At the influence of Spencer, an economist, the biologists agreed that survival of the fittest was most accurate. In a dazzling swirl of circular logic, Spencer adapted “survival of the fittest” to create his theory of Social Darwinism, forming the quicksand on which “race science,” eugenics and other pseudoscientific justifications for social oppression stand. The forgotten metaphor of the seed as a resilient, persistent investment in future generations made way for the more nefarious metaphor of the natural morality of “winner take all,” supporting tendencies toward individualism and the extraction of natural resources in human society. It is uncanny that the earliest articulations of this insidious phrase that has shaped the modern world come from friendly correspondence between the “fathers” of Western biology and economic philosophy.

Western society took off and ran with the tidy notion that social interactions mirror the perceived ruthlessness of the natural world. But biology is more nuanced than this and is filled with examples of organisms of the same and different species operating cooperatively and patiently. Lessons for collective survival and care for distant generations are hardwired throughout biology. This wiring reveals that uncertainty, danger and scarcity are constants which every generation must respond to through shared knowledge. With the same level of imagination that Spencer and Wallace used to form their antisocial theories of biology, we can seek better, more accurate and more generative models for how human communities can endure in spite of oppressive and extractive factions within society. Even within the social, political and epidemiological miasma that 2020 has proffered, it is possible to adapt while shaping the environment and building resilience through care and awareness of the next generation. The culture of Western science could only offer metaphors that support capitalism and harm, but our families, communities and shared histories reflect the depth of guidance that plants and seeds have always held for us.

I see this lesson pointedly in the relationship I have with my immigrant parents. My mother and father have together ensured the growth of hundreds, if not thousands, of plants. With the sort of practical, vocational joy that accompanies hobby-labor activities for immigrant parents, they cultivated a sprawling garden in a suburban town, far from the countries they call home. I remember spending the springs and summers of my youth running around them as they worked, helping when a hose was required but largely observing and listening. They would purchase flowering bulbs, seeds in bulk and the scraggly, small plants in the clearance section of the hardware store, or they would even intervene when worst-off plants were en route to the dumpster. It embarrassed me that they were always getting the rough shrubs and the half-rotten bag of canna bulbs while others in the store were purchasing the marigolds and petunias in bloom. As time passed, I realized that while we did not look well-off standing in the line at Home Depot, my parents were more interested in the potential of the scraggly plants and seeds. They believed that their vision was worth some years of very hard work and a temporarily scrappy appearance.

Recently reflecting on this memory, it occurred to me that my parents’ approach to gardening extended far beyond the yard. Like so many future elders, they began with very little but invested what resources they did have in their children. To the best of their abilities, they bolstered us with ethical wisdom gleaned from our ancestors and their own experience. They fortified our family and the lives of those in the communities whom we brushed against, both then and now, by insisting on an ethic of giving beyond your means in spite of uncertainty. In doing so, they identified a natural reservoir of energy in us that was refilled each time we could offer others care. Through them, I’ve come to view community like the ancient relationship between plant and seed. Throughout its lifetime, the plant is faced with risk, adversity and death, but it’s through the long view of its ancestors and the investment in its seed that the plant, in the present, is renewed. Offering support freely, with the hope it would fortify others, became the antidote to the competition, scarcity and fear that seemed, then and now, to turn the wheels of society. As an adult living in a moment of social, economic and political forces that discard Black and brown lives, erode democracy and lay waste to ecosystems, the intergenerational wisdom of plants and their seeds, enacted by my elders and community, may serve as a lighthouse to those of us wondering where to go from here. 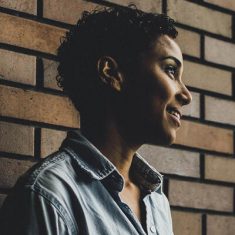 Dr. Suzanne Pierre (she/her) is a global change ecologist and biogeochemist. Her work is focused on relationships between soils, plants, microbes and the elements they exchange. She is a writer and the founder and director of the Critical Ecology Lab, a not for profit research and social change organization. Suzanne is currently a visiting scholar at the University of California Berkeley and is a 2021 Osher Fellow at the California Academy of Sciences. She lives and works on unceded Chechenyo-Ohlone Territory (Oakland, California). 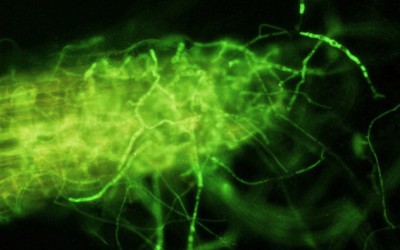 Space
Not Just For Your Gut: Probiotics Promote Plant Growth 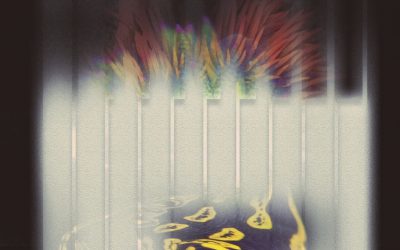 Process
The Next Great Revolution in Wellness Will be Fungal 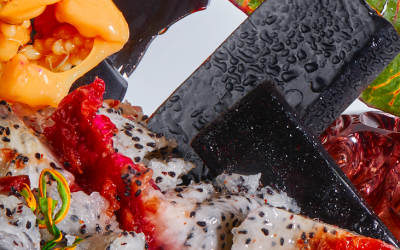 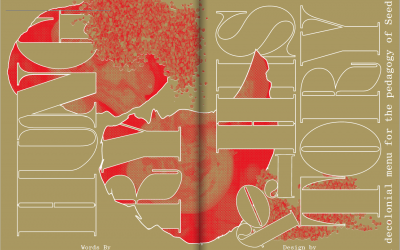 Materials
What Seed Biology Can Teach Us About Shared Survival
Studio Visit
REPAST: Alexis Soyer, The Victorian Celebrity Chef
Studio Visit
The Worker-Owned Wine Bar Serving Up Natural Wine With a Side of Anarchism