Profiling systems bridging the urban, the periurban, and the rural to complicate our understanding of the geography of our cities.

In Tivoli, Italy—around an hour and a half bus ride from the Centro Storico of Rome—lies one of the most dramatic celebrations of water in the world: the fountain garden of the Villa D’Este. Built in the 1500s by the wealthy Cardinal Ippolito II d’Este, the Villa’s expansive grounds contain hundreds of fountains. Taking outlandish forms—from grotesque faces and moss-covered dragons, to a boat with an obelisk for a mast–the fountains are powered by gravity alone and spurt water throughout a lush landscape of planted beds, reflection pools, waterfalls, artificial grottos, and flumes. Standing along the “Viale delle Cento Fontane,” or the “Avenue of 100 Fountains” (actually composed of 300 fountains), you can gaze out across the countryside of Lazio below, and somewhere on the haze of the horizon, to Rome. The Villa D’Este highlights an important feature of the hills around Tivoli, prized since ancient times: the rich spring water of the Aniene Valley. Nearby, abandoned villas where this water no longer flows reveal the essential, place-making impact of the springs. There may be no greater counterpoint to the Villa D’este than the city-scale ruins of the Roman emperor Hadrian’s villa, which can be seen in the valley below from the gardens. In the height of summer, it is dry, and hot, the wreckage of grand fountains flickering in the heat waves of the midday sun. The Mediterranean climate, famed for its mildness, can be brutal without a secure water source.

How does the city of Rome, with nearly three million residents, survive? The hills surrounding Tivoli are where the story of Rome’s drinking water begins.The water that feeds Villa D’Este comes from groundwater, a large standing aquifer within Karst formations—a geologic feature characterized by many passages and holes dissolved from rock, which allows for high water inundation. This same water is what the ancient Romans tapped as early as 140 BCE as source for their aqueducts supplying the city-state’s water. Of the eleven ancient aqueducts, four begin in the Aniene valley, stretching roughly forty miles to the city center. In modern Rome, not much has changed. Ninety-seven percent of Rome’s water is provided by springs. In some cases, it is still brought to the city using ancient infrastructure The famous Trevi Fountain, for example, gets its water through remaining underground segments of the Aqua Virgo.

I was fortunate enough to spend close to a month in the Eternal City this summer, studying the landscape and architecture structuring the urban fabric through long days of walking, and periodically taking refuge from the heat in the dark and cool interiors of churches. The drama of chiaroscuro1—the sharp shadows on the undulating baroque facades, the bright-bleached walls outside to the dark and cool inside—is an apt metaphor for how a city walker relates to water in the city. I would walk near-empty handed, only a small sketchbook in my pocket, accepting and enjoying the sweltering sun. When feeling too sun-soaked, or more bluntly, dehydrated, I would shift my attention to the streetscape, peering down alleys and into squares. Before long, I was sure to encounter a fountain, bubbling with some of the coolest, clearest water I’d ever tasted. That I could walk out my door in the morning—my Nalgene abandoned on my desk—with confidence that free, clean water could be found whenever I might need it, and practically anywhere in the city, seemed the stuff of utopian urbanist dreams.

The Nasoni, or “big noses”—named from their spouts, which protrude out like a nose from a head—number some 3,223 across the city. Azienda Comunale Elettricità e Acque (ACEA), the water management company for the region, counts a total of 6,044 in the entire service area of Lazio. In the center, where most tourists, like myself, spend the bulk of their time, one can be found without too much trouble—seemingly stumbled upon at just the right moment. The crowds, the sun, the dry sharp relief of ancient stone, beyond time, can be exhausting. The fountains feel, truly, like an oasis.

And what an oasis they must be now. As heat waves tear across all of Europe, Italy is experiencing its worst drought in 70 years. The Po River, the country’s longest, is reduced to critically low levels exposing wide swathes of its sandy bed. Rice paddies are drying up, leaving whole fields of ruined crop, while tomato growers, olive groves, and vineyards are threatened with the same fate. What of this makes its way to the day-to-day lives of a city dweller in the nation’s capital? Food shortages perhaps, and of course the heat—suffered by all—but soon enough, water rationing across Italy will be likely.

Water access in the city has a history of contention and political pressure. After the fall of imperial Rome, and with it many of the original aqueducts and fountains that characterized the ancient empire’s wealth, the city population collapsed, in no small part due to a lack of available fresh water. As such, bringing clean water back to the city became the principal project of the city’s rulers– the various popes which, from the 8th century to the 19th, were the primary government of the Italian peninsula.2 Elaborate fountains acted as billboards to announce the grand re-entry of fresh spring water into parts of the city, and the power of the papacy.   This trend is exemplified in Baroque masterpieces such as the Fontana dei Quattro Fiumi (by Bernini for Pope Innocent X) in Piazza Navona, and of course the Trevi (Nicola Salvi for Pope Clement XII).

In 1870, Rome was captured from papal rule, and the Risorgimento3 came to a close: the Italian peninsula finally became a fully united nation-state under King Vittorio Emanuelle II. Water, again, announces the new sovereignty: The Nasoni were a way for the new united government to celebrate “modernizing” the country, supplying hygenic water to the growing capital. We might ask what a similar celebration might look like in our contemporary cities. How would a city’s leadership celebrate the return of public space to the city? Of ecosystems resilience? Of resilience to climate change and water security?

Municipalities of the United States could do well to mull on these questions: the current water crisis in Jackson, Mississippi4 is only the most recent instance of municipal neglect of water supplies in majority Black cities. From Flint, to Milwalkee, to Baltimore, Black communities have to disproportionately deal with contamination, flood events, and aging infrastructure due to decades of disinvestment. 44 million Americans are drinking water from service providers that have recent Safe Drinking Water Act violations, and are disproportionately likely to be Black.5 Thinking of the water not as a “service”, but as a shared, city-wide commons, about which we might all have decision-making agency, is a necessary step to answering some of these questions, and achieving a more equitable and sustainable future.

For now the public drinking fountains stay on in Rome, but this access is not guaranteed. In 2017, the last time of serious drought for Rome, the mayor ordered some of the Nasoni be shut off, at the rate of roughly 30 a day. Protests came from nonprofits and residents who argued that the fountains are vital for the lives of people experiencing homelessness in the city. They’re also critical to the nonhuman inhabitants of Rome—a small basin at the bottom of each fountain, specifically designed for dogs, some say, allows all sorts of animals, wild and domesticated, to take a drink. It has also been pointed out that leaking pipes in the city’s vast and aging plumbing system are to blame for far more water waste—some cite a loss of roughly 50 percent of the city’s water—compared to less than 1 percent lost from the Nasoni. Others argue that the Nasoni are actually necessary to the system, relieving pressure like a release valve, to keep the water flowing and the pipes clean.

Yet the drought brings to light that, as delicious and seemingly inexhaustible as it is, the groundwater that feeds the city with water is not, in fact, eternal. In order to be replenished, an aquifer must be slowly “recharged” by rainfall. The measurement for groundwater recharge rates is in the millimeters per year, and so is by definition a slow and steady process. The ACEA is aware of this challenge, and recently inaugurated a man-made recharging system to pump water back down into the aquifers. The recharging of groundwater is just one of hundreds of water-related problems cities will face in the coming decades: problems that seem particularly pressing for Italy’s capital. Climatic projections expect that drought days could make up more than 50 percent of the dry season in the mediterranean region by 2065, if greenhouse gas emissions aren’t radically reduced. The greater Po Basin (where a third of all Italians live) hit record low water levels this year. Estimates say 30 percent of the rice crops of the region will die, affecting the economy of Europe and beyond. (Italy provides the EU with 50 percent of its rice). This July, record high temperatures in Italy’s north destabilized a glacier, causing an avalanche in the Dolomiti (the Italian Alps), leaving seven people dead. A recent toxic smoke cloud hovering over Rome’s skyline in late July seemed an omen of the potential strife to come.

Today, the Nasoni are a model of what urban water access might look like: a free resource that encourages occupation of the public realm, supports the health of all, and renders commodification efforts (i.e. the plastic water bottle) obsolete. Rome has a real, visual and physical connection to its water source, to its hinterland, thanks to them: the Nasoni flow day in and day out, each one like their own mini-river. Their soothing trickle, perhaps lulling you to sleep through an open bedroom window, the cool air around them deepening your breath: le fontanelle bring the hinterland into the daily life of the city—a constant reminder of the life giving force of water. Perhaps this is when Rome’s moniker as the “Eternal City” rings most true: water flowing from the fountains like a river, the sun sharp and timeless on the travertine, and the scraggly permanence of the stone pines, their shadows stretching out across the surface of the Tiber. 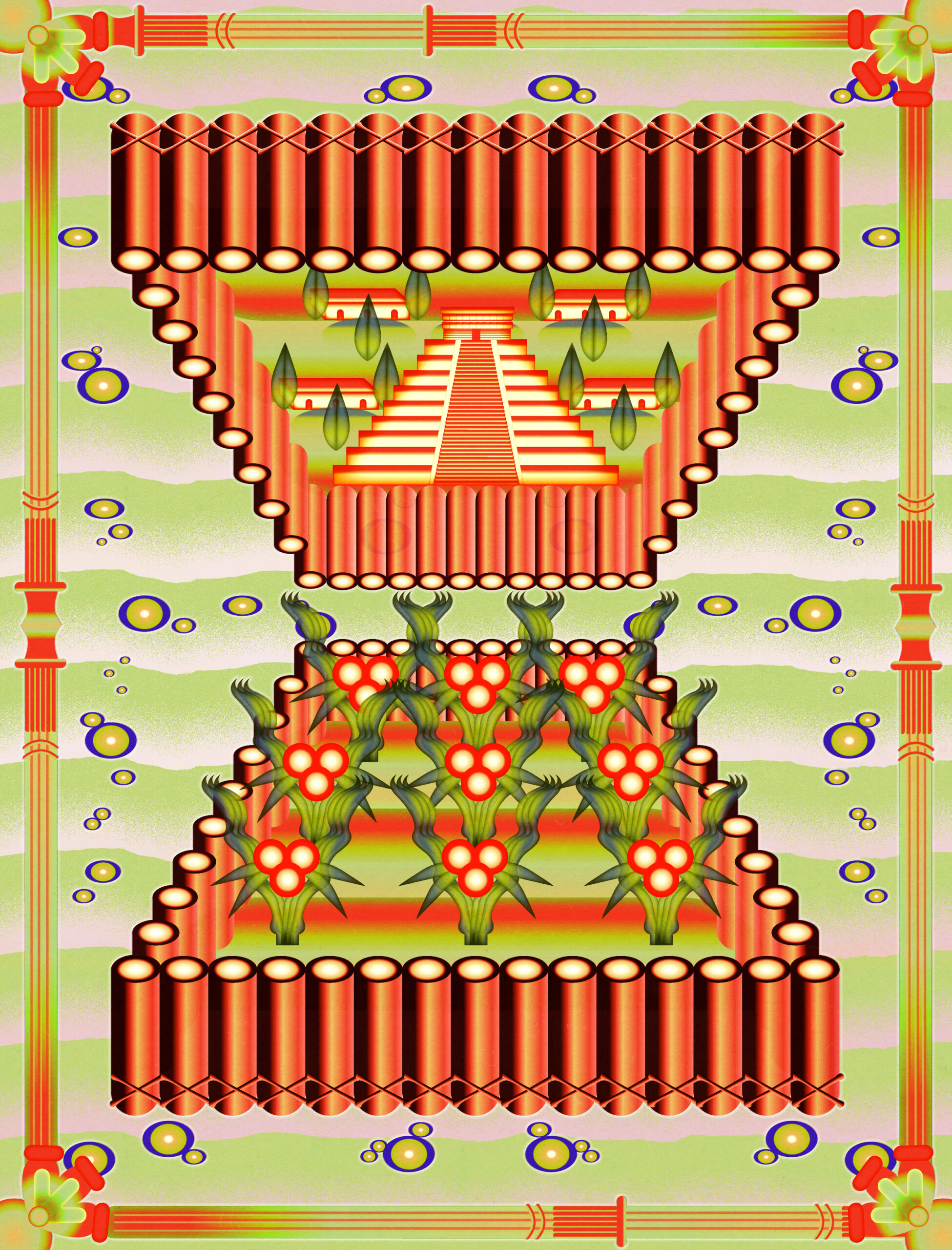