Great culinary experiences don’t just happen; they are often the result of selective sourcing, careful crafting and thoughtful presentation. One place you don’t expect to find an awe-inspiring dining experience is on an airline—in-flight meals have been typified by soggy vegetables, re-solidified cheese sauces, and rubbery bread balls. If you’re anything like me, you opt for a package of pretzels and a stiff Bloody Mary instead.

There seems to be an exception, however, with Emirates First Class. I recently flew in first class from Milan to JFK on the Dubai-based airline, and I have to say: airline dining is a more appropriate term for the kind of mile-high meal you find on Emirates. If a land-bound culinary experience is the result of much effort and talent, then one that is 30,000 feet in the air is surely a feat.

A steaming cup of hot Turkish coffee greets passengers as they board, served from an authentic dallah, a traditional metal Arabic coffee pot. A leather-bound menu book details the made-to-order food options; passengers can request canapés, wild Iranian caviar or beef tenderloin whenever they’d like. The dish is served in about 20 minutes, in nothing less than a white porcelain dish. Your meal can be paired with choices ranging from a 2004 Bordeaux or a bubbly Dom Pérignon. The extent to which the crew strives to replicate a real table setting was particularly eyebrow-raising: a giant (by airline standards) fold-out table got a crisp white tablecloth, full set of silverware, bread plate, bread basket, olive oil carafe, salt and pepper shakers, and a wine glass (stem and all.) The napkin was folded into a decorative triangle. “We’re able to replicate best restaurants around the world,” says Darren Bott, the manager for regional catering. “There’s no reason why you can’t have the same experience you would in a fine dining restaurant.” 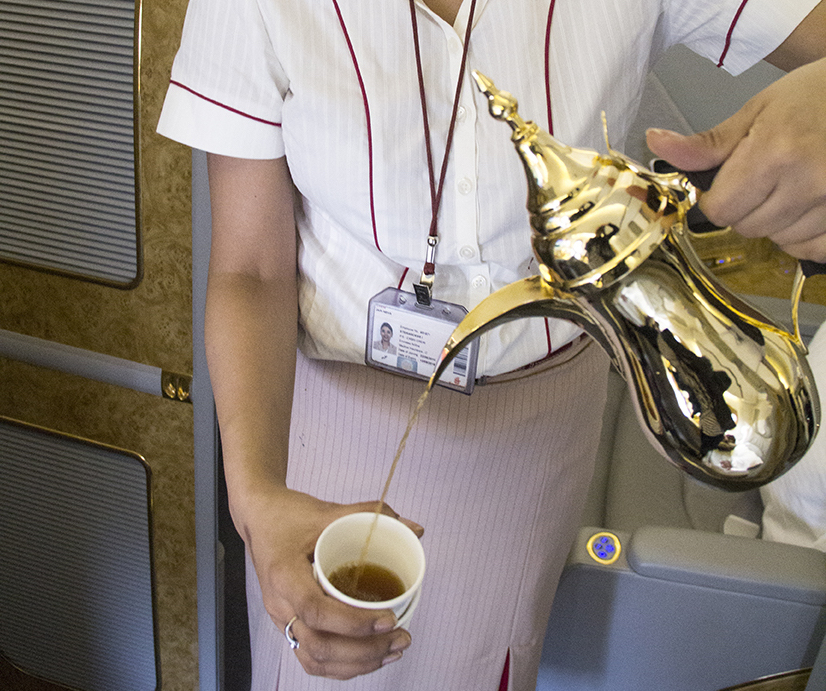 Serving coffee from a dallah, is a traditional sign of hospitality in many Arab countries.

Reasons that prevented airlines in the past from providing a high quality dining experience include the airplane’s cabin pressure and low humidity (which affect flavor profiles), the necessity of precook-and-reheat meals, and the limited choices offered due to space constraints. Emirates is working to re-design each aspect of this culinary system. They start with the regions that they are flying planes out of, aiming to coordinate with that region’s seasonality. At first glance, it seems absurd that a global airline with 95 caterers around the world could say they are “seasonal.” But Emirates is actually incorporating dozens of “seasons” into highly customized menus across their 155,000 daily meals.

We are actually designing menus according to various seasons all over the world.

A NEW GLOBAL-SEASONAL MENU
“We do a lot of research as to what ingredients are available in each region,” explains Bott, “What do we want to celebrate from this region on the menu? What’s being grown right now? We design dishes around what’s in season in the regions we have caterers. We are actually designing menus according to various seasons all over the world.” If you are flying out of Germany in the spring, chances are, you’ll have white asparagus on board.

Beyond ingredient-sourcing, Emirates also takes a novel approach to recipe development. While other airlines often design menus based off of the cuisine of their native country, Emirates doesn’t just stick to Arabic cuisine. They actually design recipes based on the demographics and nationalities of the passengers expected to fly on each flight, which can result in some bizarre offerings. Flights in their African regions, for example, typically feature menus of the Far East, since so many Chinese businessmen travel to that region. Similarly, routes to and from the California coast usually have Indian dishes, due to the passengers working for the tech industry flying to and from India. 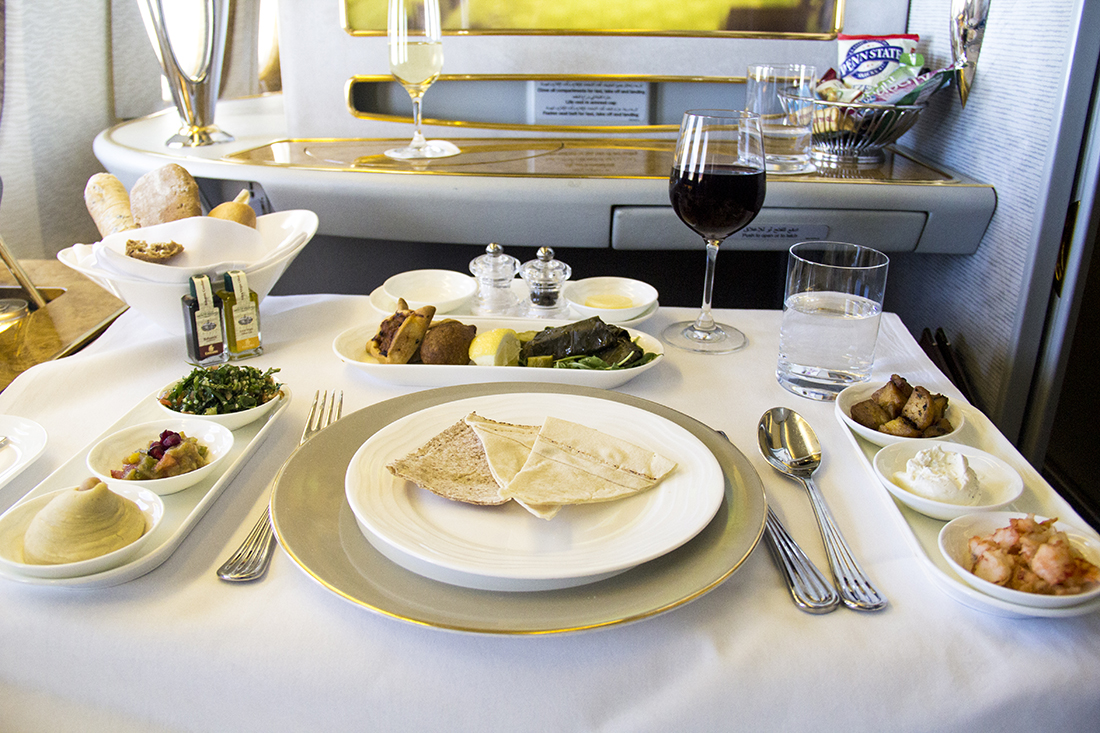 TASTE AT 30,000 FEET
But no matter how carefully the food is sourced or prepared, it still has to be served at an extremely high altitude. And so the element that may affect dining the most has nothing to do with the food itself—it has to do with the cabin pressure and humidity. Airplanes have very low humidity; half of the air in a plane comes from the very dry outside air and mixes with the existing air. This low level of moisture causes our sinuses to close up. And since our retro-nasal smell (in the back of our mouth) accounts for up to 80% of our sense of taste, closed sinuses are a serious detriment to our ability to enjoy food. Additionally, the cabin pressure of most airplanes numbs some of our taste buds, and causes foods to taste differently than normal. In a recent BBC article, Charles Spence, professor of experimental psychology at Oxford University, explains which tastes are most affected in the air. Our ability to taste sweet and salty is diminished, while the taste of spiciness and umami (the savory flavor of seaweed, tomatoes, mushrooms, and meat broths) is unaffected, if not enhanced. He mentions that this may be why so many people find that they crave Bloody Mary’s in the air.

However, modern aircraft are mitigating these hindrances. Joost Heymeijer, the senior VP of catering for Emirates, explains how their aircraft are evolving: “With our new A380, the cabin pressure has improved so much that it’s really the equivalent to a ski lodge in the mountains. Would you worry about how your wine or food tasted there? Probably not. The flavor differences from cabin pressure aren’t really that noticeable anymore.” This has allowed them to replicate restaurant dishes more closely than ever before. And in regards to wine, they can serve some of the world’s best wines without worrying that they’ll lose their taste in the air.

And for Emirates, the wine list is a huge part of your in-flight experience. They’ve invested heavily in wines and work directly with wineries themselves. The airline has 1.2 million bottles of wine aging in their cellars in Burgundy, some of which will remain there for another decade before the sommelier feels they’ve aged enough to serve on-board. 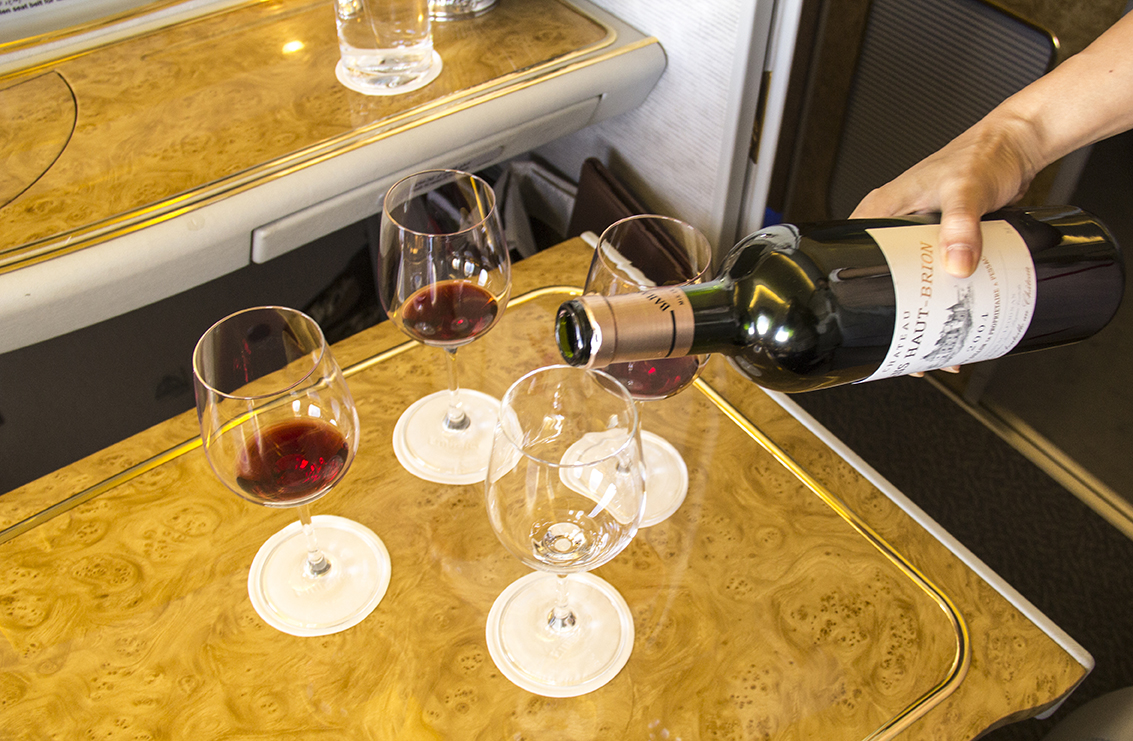 The Emirates wine list is an important part of the First Class experience. The airlines has 1.2 million bottles of wine aging in their cellars in Burgundy

TABLEWARE TO-GO
Another critical part of the system is the industrial design, including the customized creation of everything from serving trays to wine glasses to plates—it all must utilize the most efficient design to maximize extremely tight galley space, while also replicating the more indulgent aesthetics of fine dining. “We work in close collaboration with glass manufacturers, and have them specifically design trays that enable glasses to not move around,” Bott explains. When asked why they don’t just go for stemless glasses, he says that for Emirates, the aesthetic of an actual wine glass is important enough to justify years of lengthy development to make it work. Cutlery, too, makes a big difference. Emirates provides passengers with a full set of diningware—actual steel forks and knifes—since eating with plastic cutlery makes the food taste worse.

[Editor’s Note: See our story about the design of cutlery and the way we taste food]

IN-FLIGHT INGREDIENTS
When it comes to the food itself, the food is designed to withstand any loss of taste due to changes in pressure or re-heating. (Sous vide technology has been a great benefit, and it allows them to cook food in sealed plastic bags submerged in boiling water.) “We look for flavor profiles that don’t diminish at altitude and under pressure,” says Bott. “A lot of development goes into recipes to ensure the altitude doesn’t impact the food too much. We often find that what works best are lots of heavy reductions and braises.” In addition, they look for foods whose texture remains resilient—casseroles and stews are big winners. In the end, though, Bott says that the emphasis is on great raw materials. The best ingredients will always provide the best meals, the same principle that prevails in many of the world’s best restaurants.

The immense effort into the dining experience is justified, in the eyes of Emirates. Eating is arguably one of the most intimate acts you engage in, and thus, is a highly personal and emotional experience. When that is coupled with an international flight, its importance is amplified. As Heymeijer puts it, “Flying is always highly charged and emotion. Whether it’s excitement, fear, joy, or romance, it’s emotional. And we are a part of that experience.”