Someday soon, you might be able to have your cake and eat it too—or at least a virtual simulacra of it. Such is the premise of Project Nourished, a multi-pronged investigation into the as-yet-uncharted territory of computational gastronomy. The ambitious food-design undertaking has yet to fully live up to the promise of its seminal viral video, in which a woman takes a seat at a table only to reach past her place setting to don a futuristic, all-white headset resembling a pixelated cartoon cloud. The voiceover invites the viewer to “imagine you can eat anything you want without regret.”

It’s not a purely epicurean thought experiment: simulating sugary or fattening foodstuffs speaks not only to guilty pleasures but also to dietary issues such as diabetes and obesity. But seeing as there’s no recipe for what a virtual meal might entail, there are still several steps between 3D-printing hydrocolloid nutrient cubes and the sci-fi imagery in the project video.

In the meantime, Project Nourished founder Jinsoo An proposes, “the uncoupling of the physical attributes that prevent food from being more than what it is today. Motion, color and interaction could be mediated by a computer…to reverse-engineer human senses and cognition related to the perception and consumption of food to enhance and diversify methods of eating.” Since launching, the entrepreneurial experience designer has recruited some 30 collaborators in his effort, positioning Project Nourished as a proponent of computational gastronomy. To that end, Project Nourished has taken a proverbial spaghetti-on-the-wall approach—except that the wall is a moving target in a speculative environment. In fact, An identifies at least two other research areas in addition to algorithmic gastronomy, think IBM’s Chef Watson, and VR food experiences: deglutition-free diet and autonomous gastronomy. The former concerns chewing and swallowing—specifically eliminating the need to do so—either as a solution for those who are unable, or simply to achieve a “more aesthetic way of experiencing [food].” The latter addresses robotics as assistive devices for food consumption.

But the full-fledged virtual experience remains the holy grail for Project Nourished, a substantial departure from the academic conceit of data-crunching flavor combinations and ingredient networks to fine-tune recipes. The woman in white’s experience in the video was merely an amuse-bouche for what An has taken to calling hypergastronomy, in which taste, texture, appearance and nutritional value can be designed from scratch.

Since the user experience remains vague, An and his team rely on visuals to, in his words, “convey the message that this is something very different and very futuristic, and actually quite attainable at the same time.” The result is a suite of conceptual hardware devices, rendered in a highly stylized design language: a headset, an aromatic diffuser, a gyroscopic utensil, and a bone conduction transducer, which collectively trick the user’s senses into tasting steak, apple pie, sushi—you name it.

The design itself is willfully abstract: the all-white, faceted objects look like fragments of a digital iceberg. The “low-poly” look may not be to everyone’s taste, but An considered the backlash against existing VR and AR hardware like Google Glass and set out to create something sculptural inspired by architecture, art and science. The bigger problem for hypergastronomy, of course, is a classic case of the chicken and the egg. If An is tightlipped about the future of Project Nourished, he concedes that much of what they are working on may be a matter of holding out for VR to catch on.

For now, we can only revisit An’s elevator pitch, a childhood memory that he cites as his initial inspiration for Project Nourished: A scene in the 1991 film Hook, in which Robin Williams’ Peter Pan conjures a banquet by using his imagination. 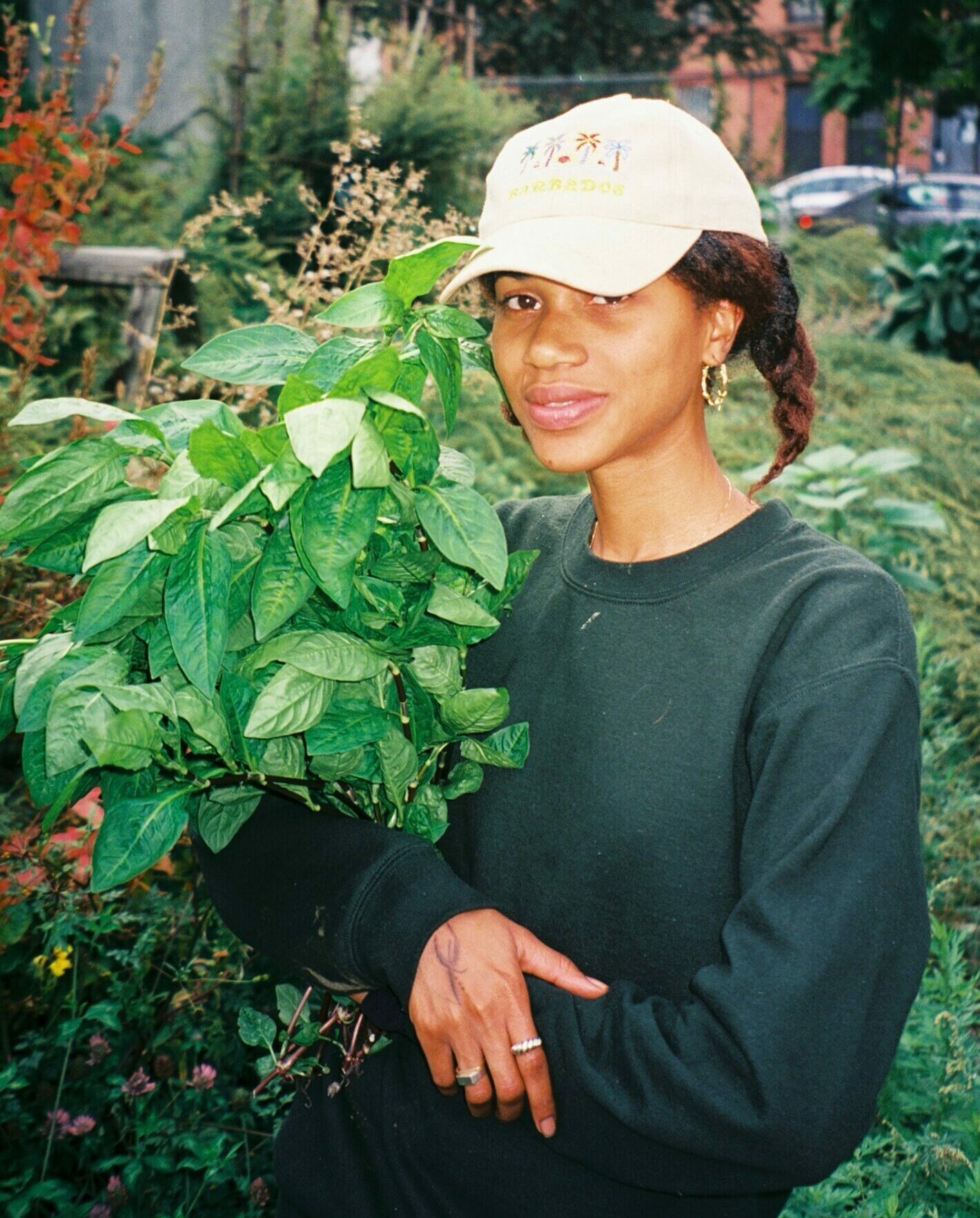 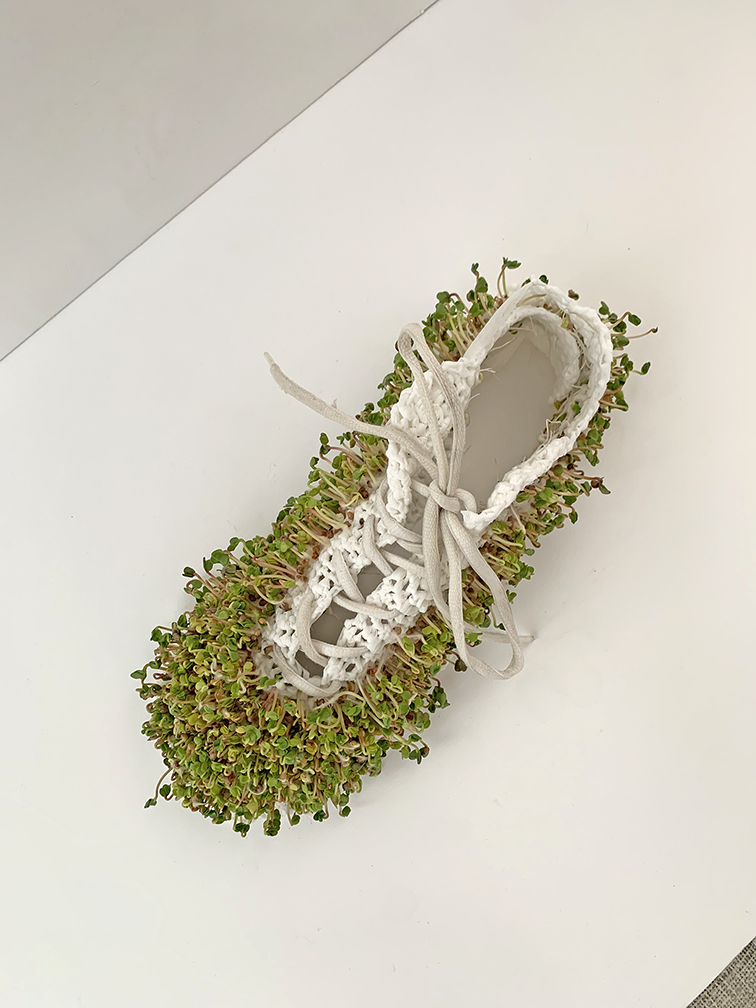 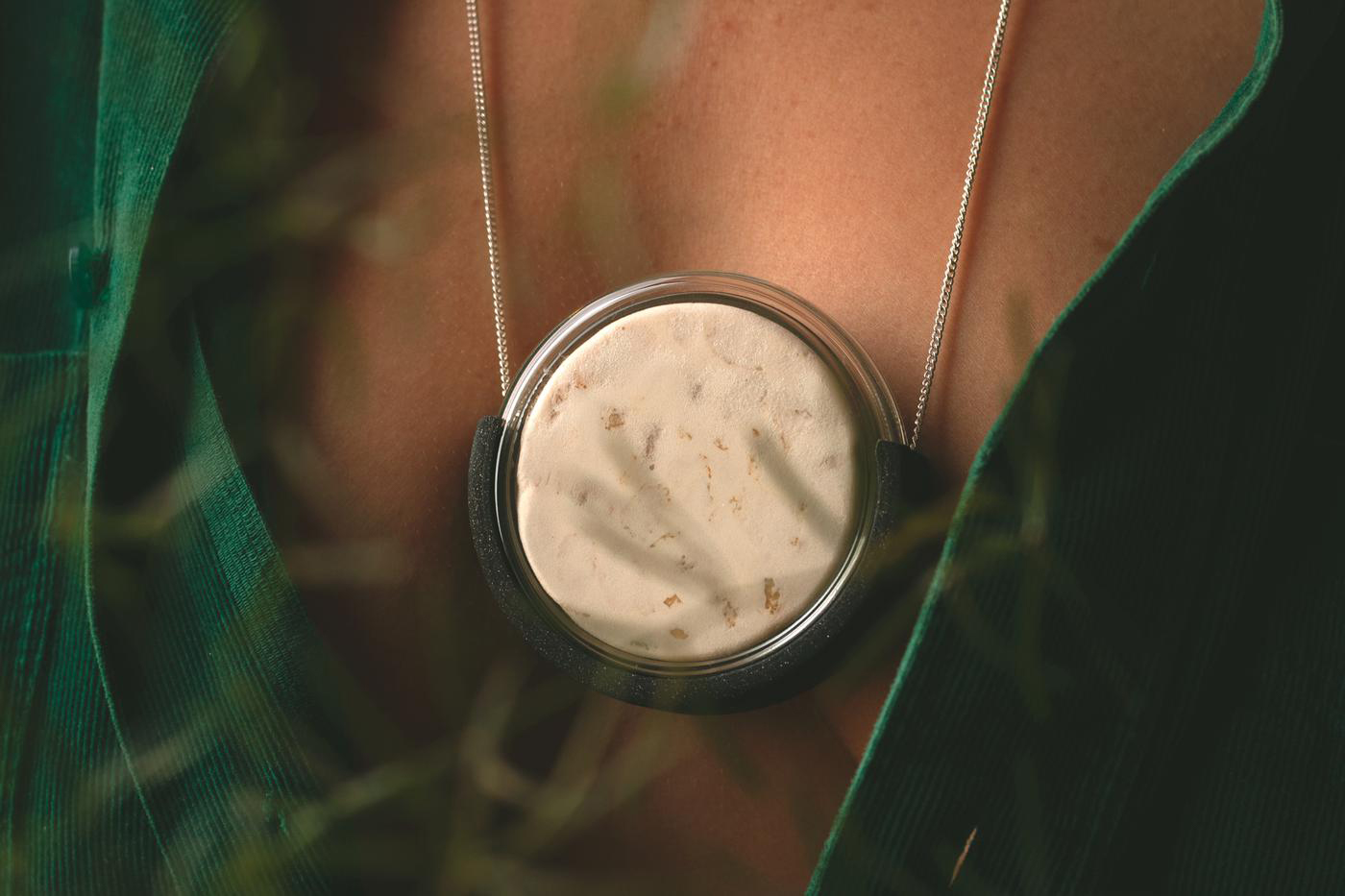 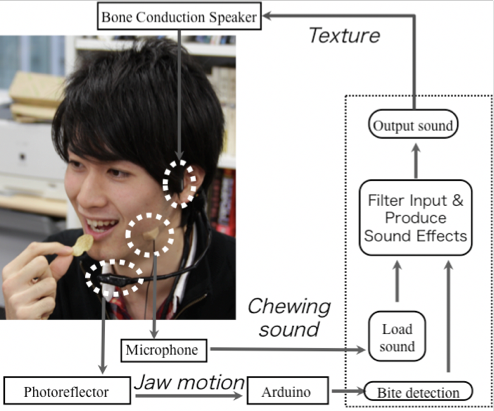 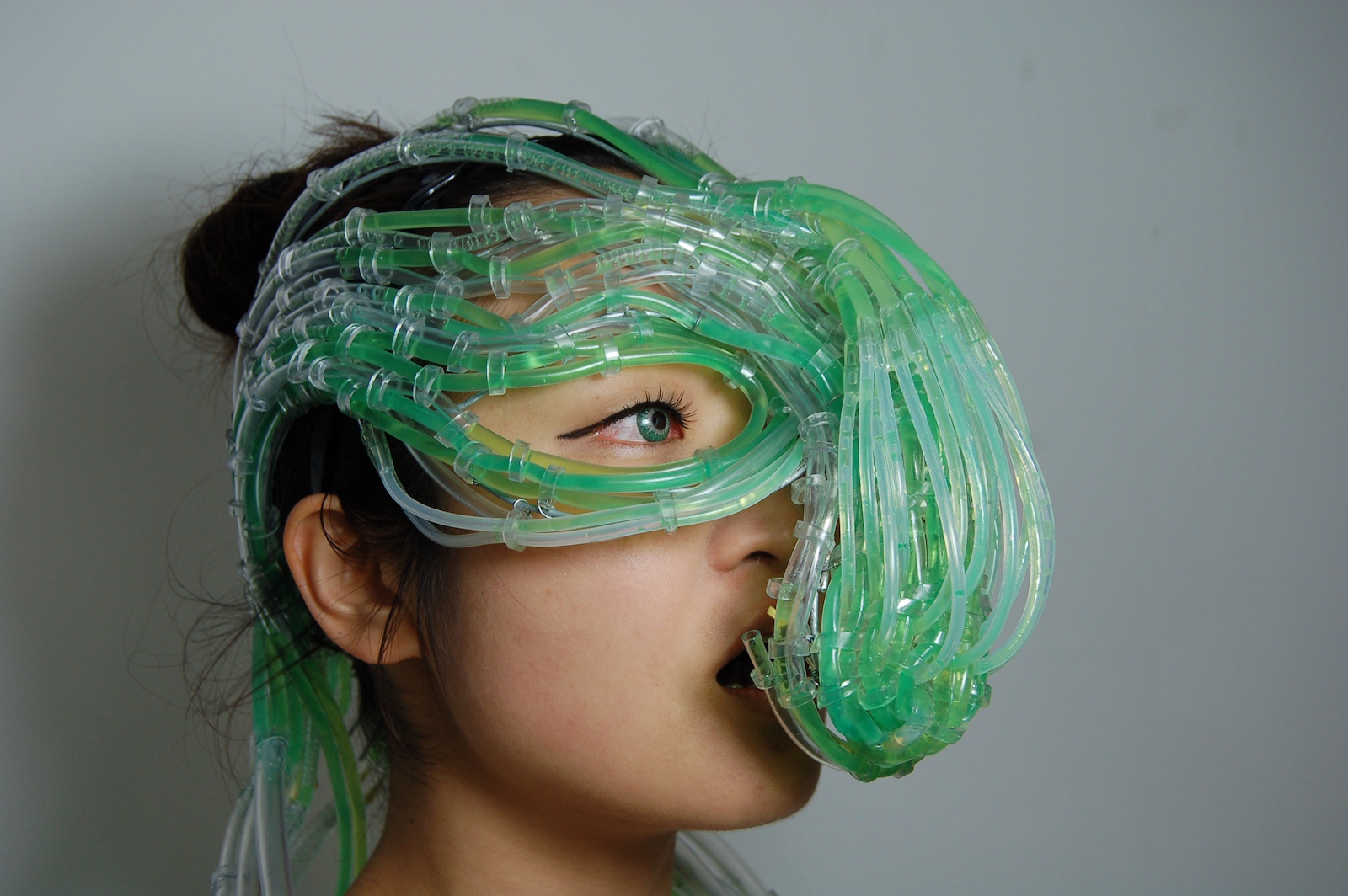 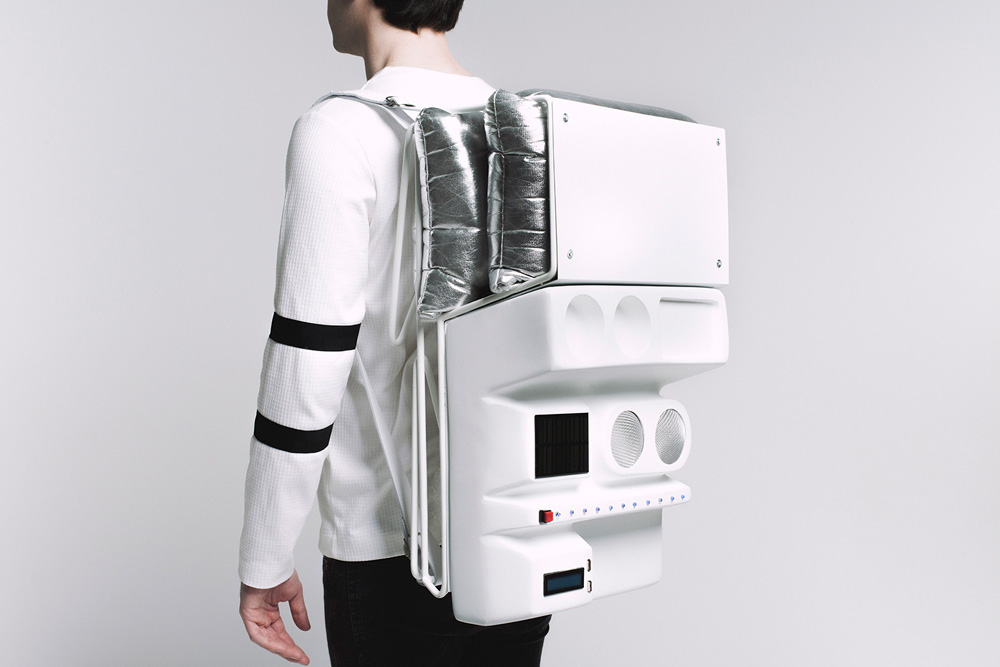 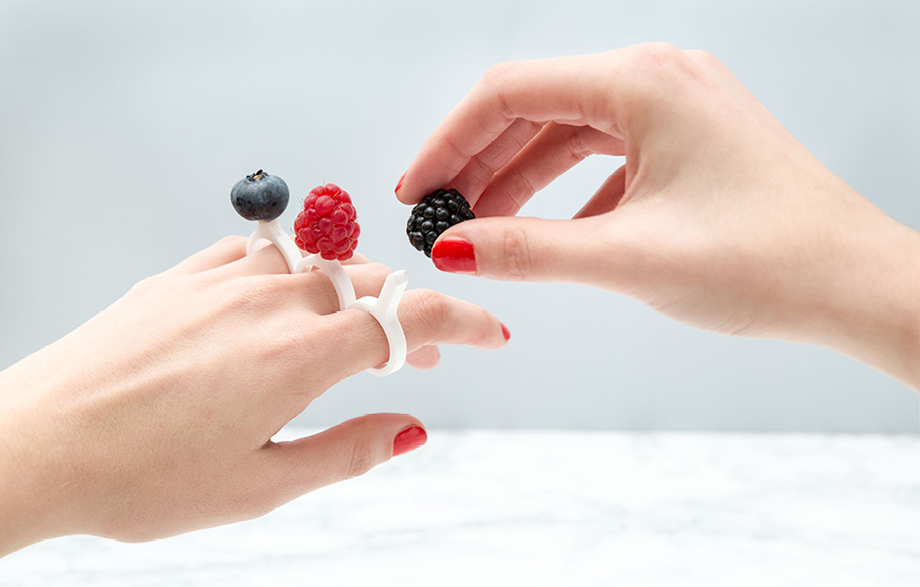