Chewing Jockey modifies taste through the manipulation of sound.
0 0
Share This!

Chewing Jockey research project at Keio University, conducted by Naoya Koizumi, Hidekazu Tanaka, Yuji Uema, and Masahiko Inami, seeks to enhance and alter your eating experience by changing the way you interpret food texture. By playing with the sounds of your own chewing, the Chewing Jockey system can shape what or how you think you’re eating. The key to this manipulation is the “cross modal effect,” a methodological strategy, popularized by Dr. Charles Spence and his research team at Oxford University, that uses the interaction between two different senses to control their individual perceptive properties. The system looks similar to a pilot’s headset, with attachments at the ear, jaw and just below the chin. In more technological terms, the Chewing Jockey is composed of “a bone-conduction speaker, a microphone, a photoreflector to measure the motion of a jaw, and a computer to design the sound effect or filtering.” Once the photoreflector detects the jaw’s movement, registering that the subject is taking a bite, the sound filter is readied to input the person’s chewing sounds. The sound filter then sends the recorded chewing noises to a computer, that edits and augments the sounds before delivering them back to the user. The result is crunchier sounds for your toast and crisper snapping when you munch on veggies.

Launched in 2011, the Chewing Jockey team ultimately envisioned their technology could help the elderly; the system holds potential for improving the “eating quality of life” for people with dentures. Dentures make it difficult to chew forcefully, detracting from the experience of eating by mitigating sound and perceived texture. An elderly subject who participated in tests of Chewing Jockey reported that it made eating toast more enjoyable for her, because she could hear it crunching again. Merlyn Miller is the editorial assistant at MOLD. A recent graduate from Cornell University, Miller studied anthropology and food. In her free time she can usually be found cooking for her roommates or salsa dancing 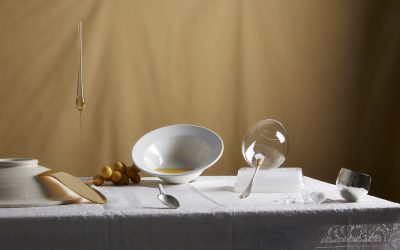 Object
The Taste of Cutlery and the Multisensory World of Eating 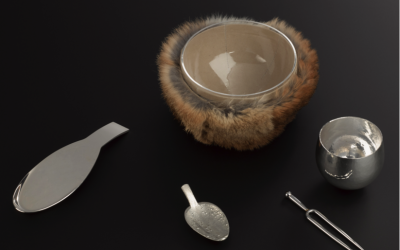 Object
Michel/Fabian on Crossmodalism and the Pleasures of the Knife, Fork, Spoon and Hand 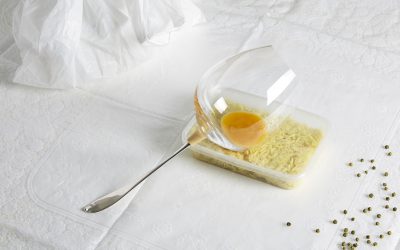