Matzo probably isn’t on your regular grocery list. And why would it be? The thin crackly, unleavened bread that practicing Jews eat during Passover hardly has a delicious reputation. But The Matzo Project wants to change that. Founded by New Yorkers, and long-time friends, Ashley Albert and Kevin Rodriguez, The Matzo Project wants to upgrade the cracker from bland to brilliant. It was a bite of stale matzo straight from the Streits matzo factory on the Lower East Side that inspired Albert to produce a delicious version of the maligned cracker. Some shoppers might fall for flavors like cinnamon sugar and everything (like New York’s poppy, sesame seed, onion, garlic and salt studded bagel), but we’re smitten with the boxes that reinterpret the iconic square package with clever illustration and eclectic typography. 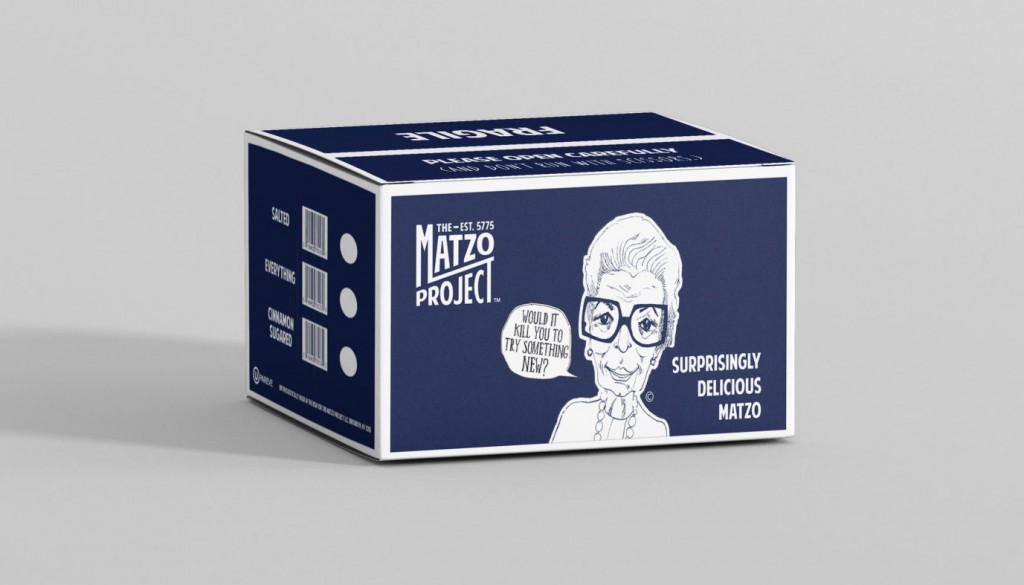 Shipping boxes for The Matzo Project. Image via Ezra Productions.

Albert and Rodriguez took an unconventional approach in producing this box. Rather than hiring a creative agency or single designer, they collaborated with a variety of freelance artists they discovered online. After finding a typographer, illustrator and graphic designer to work with on their vision, they traded ideas and inspirations to determine the box’s appearance. The result is modern with a tongue-in cheek attitude that reflects the temerity of Albert’s belief that matzo deserves a place in the cracker aisle and in your pantry all year long. 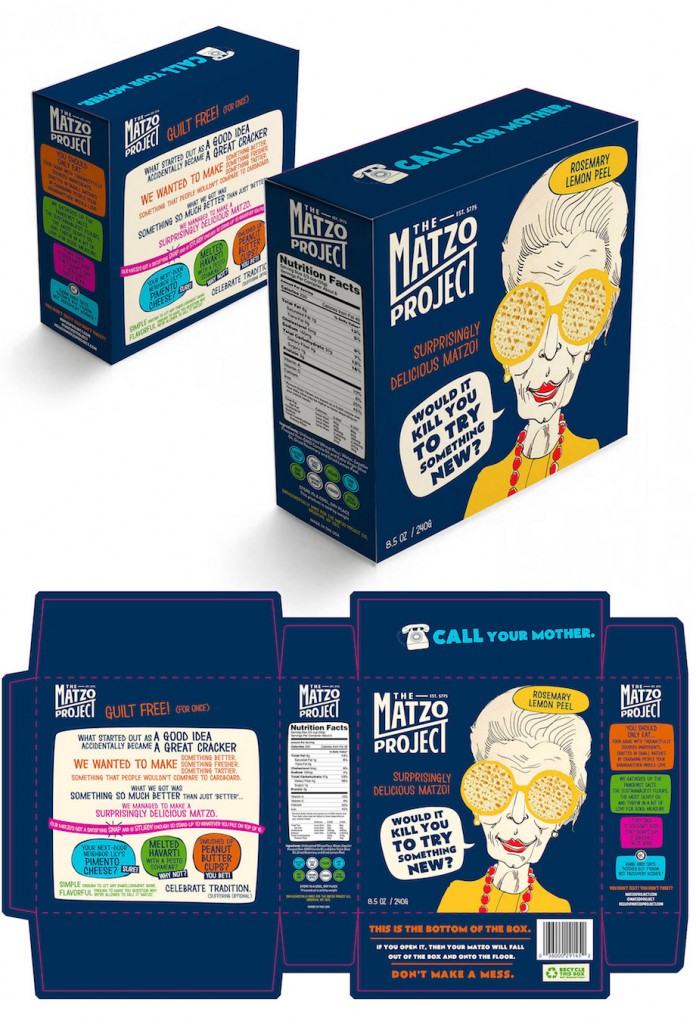 The full box illustrates the different design components the team collaborated on.

Although they teamed up with several designers, both Albert and Rodriguez came to the design process with an idea of how they wanted The Matzo Project to appear to consumers. They wanted a spokes-grandmother with the same endearing, curmudgeonly attitude that their own grandmothers both shared. With her eyeglasses functioning as windows that let you see the difference between this matzo and old-school varieties, the grandmother mediates between the consumer and the product. She yells at shoppers to try something new on the front and teaches them about this unique matzo on the back. Her bouffant and bright clothing might mark her as a nonna, but her smile and wrinkles endear her to consumers of all faiths and traditions. Fittingly, Albert and Rodriquez classify themselves as “cultural” Jews. They are care most about the friendships they’ve built through their common background and want to use The Matzo Project to introduce new friends to their traditions.

While The Matzo Project is currently available only in select grocery stores and specialty food purveyors in the New York City area, the spirit of inclusion that marks the box and creative process speaks to the product’s potential for growth. Blending familiar characters, attitudes, and colors allows The Matzo Project to fit into a pre-established market niche, while the unique typography, unconventional presentation, and marked process proves that this niche is bigger than the consumer previously thought. Ultimately, The Matzo Project uses their box to mediate between the new and old, making this a product that sticks to its roots while also laughing at them.