Specializations in interiors, products and theory at design schools and universities around the globe is nothing new. However, Scuola Politecnica di Design (SPD) took specialization to another level when it created the curriculum to meet the demand for a top quality education in food design and innovation. SPD’s highly specialized Food Design & Innovation program (the “Food Design” program) launched in March 2015, a few months before the food-themed world’s fair Expo Milan—where I was working as the social media manager for the USA Pavilion—broke ground a few miles away. The Food Design program was an instant success and has become one of the most popular Master’s degree program at Scuola Politenica di Design where I’m currently working as a consultant. 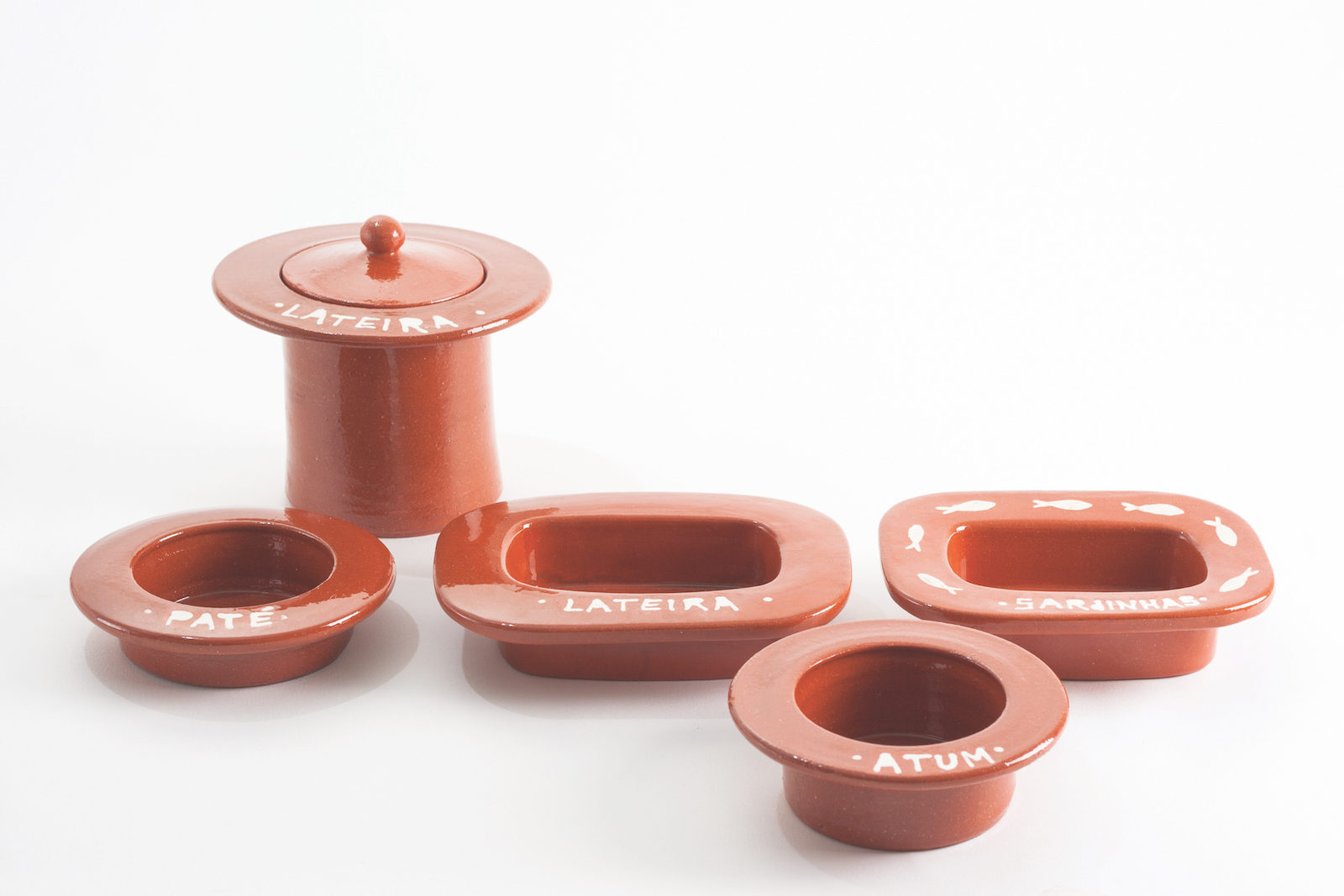 Until recently, the world of Food Design was hardly known. “Food Design is not food styling,” said Carolina Segura, one of thirty students in Scuola Politecnica di Design’s second Master’s class. “Food Design is must bigger than food and design itself.” Before man designed houses, furniture or lighting, it’s likely he engaged with food. While nature and agriculture provided food to eat, what manmade tools did she create to increase access to food? How was it preserved, packaged and sold? And today, how do we eliminate waste of food, design efficient and beautiful restaurants and prevent diet-related disease? These are only a few questions that the Food Design program engages.

The founders of the Food Design program are SPD’s President Antonello Fusetti and SPD alum Martí Guixé—a Spanish designer who many credit as one of the first designers to define the burgeoning field of food design. Antonello Fusetti states, “I have followed the work of Guixé since he graduated in 1986. He was working on restaurant interiors, furniture and kitchen products for companies such as Alessi, Danese and Saporiti. When his excellent book Food Designing came out in 2010, the concept of ‘food design’ was born for many of us in the design community.” 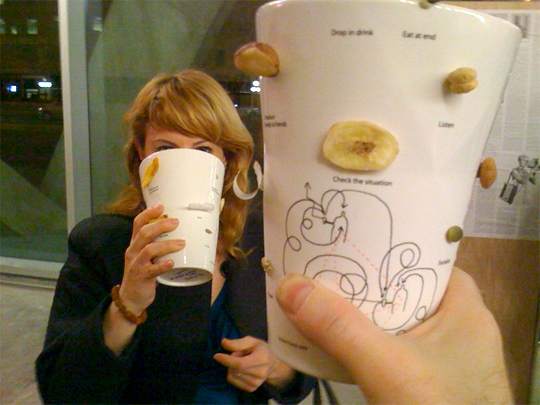 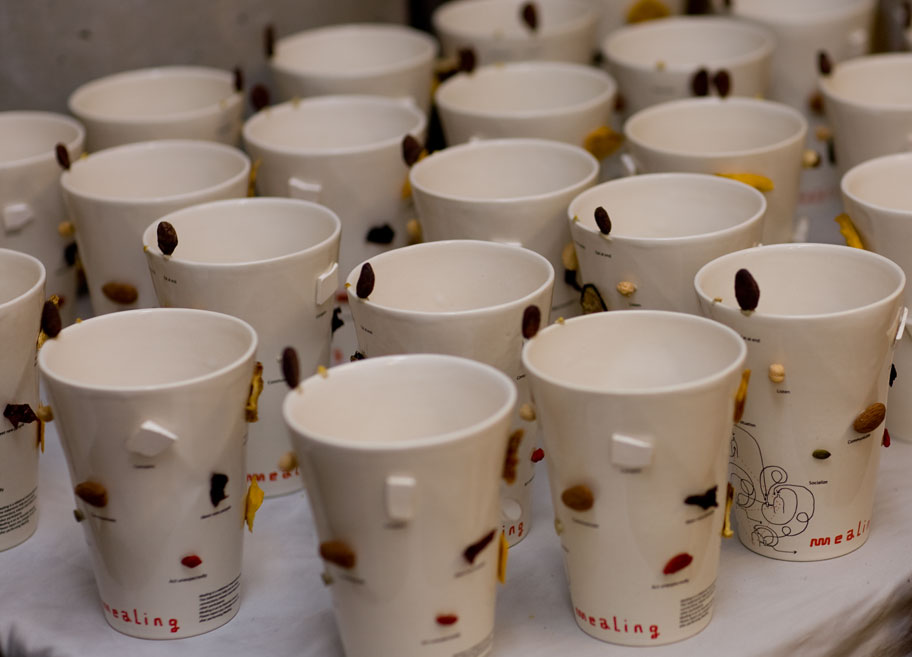 Food Designing is Guixé’s fourth book and is dedicated to his works as a designer with food. His collaborative partner, the photographer Inga Knolke, has been beautifully documenting his work since 1995. In many cases the work expands into performance studies. For example in 2009, his project “Mealing” presented at the art festival Performa, gave participants ceramic glasses with edible “microsnacks” that adhered to the surface including eating instructions, while performing small gestures that required each person to interact with fellow diners. Guixé is interested in re-designing food rituals and conventions and this impacts his teaching philosophy.

“The collaborative approach to group workshops in the Food Design Master’s is inspiring because students are coming to Milan from all over the world—they’re creating completely new perceptions of food rituals and food items,” explains Guixé. While approximately eighty percent of the Master’s program student have undergraduate design degrees, many students also specialize in marketing, economics, culinary arts, agriculture and nutrition. “I believe design thinking is at the heart of the innovation process. My favorite project was reinventing the concept of a new pizzeria. Our team came from different backgrounds and countries around the globe and so we explored the world’s perception of pizza as manifested by its many flatbreads,” said student Parizad Motiwala-O’Donnell. “Many of our projects addressed topics adjacent to the food industry. When we went to Sarzana as part of our Food & Tourism module, our project incorporated Sarzana’s food rituals but also the town’s relationship to the sea, landscape and ancient history. The lens of food can open your attention to designing around climate, agriculture and geography too.” Engaging with Italian municipalities and global brands is what sets SPD’s program apart. Founded in partnership with Pepisco which also provides two scholarships each year, Pepsico’s Mauro Porcini, Senior Vice President & Chief Design Officer, is on the faculty. “What we have achieved has been extraordinary. We have strongly believed from the beginning that combining design thinking through all facets of food studies adds tremendous value to the food industry,” said Porcini.

The Food Design Master’s is now accepting students for their next class which will begin in February 2017. The program has announced that it will expand to offer “Food Ideas”—the world’s first food design innovation hub—as an extension of the Food Design & Innovation Master’s Degree program. SPD’s “Food Ideas” hub will enhance the development of the next generation of food designers and innovators. Built on SPD’s close collaborations with food companies, large and small, the “Food Ideas” hub will expand the opportunities for exploring the connection between design, innovation and industry.