“It would be GREAT to eat with your hands,” exclaimed 8-year-old Filippo in his public school cafeteria in Lissone, a suburb of Milan. Curious and enthusiastic, Filippo and 30 of his classmates answered questions posed by two teachers from outside of the school who specialize in design and arts education for kids. Today, the teachers lead a food and design workshop. Next week, the program continues with a day of design. Together, the teachers, designers and students will create real-life solutions to school lunch service problems.

School lunch is a hot topic in Italian households. In most schools, parents review menus before they are served. In Milan, there is a group of parents at a school in the Tortona district who have formed a committee which visits with the cafeteria chef once each month to taste the recipes. However, with increased budget cuts and an increase in dietary requests by parents across Italy, a coalition of organizations is stepping up to address the issue of school food, not only to preserve this attention to detail but to adapt to dietary changes and cultivate conversation around the cafeteria spaces which are sometimes cramped and without natural light. The initiative, called Dire Mangiare Progettare which translates to “Talk, Eat, Design” is in collaboration with The Milan Center for Food Law and Policy with support from Politecnico di Milano’s design school. 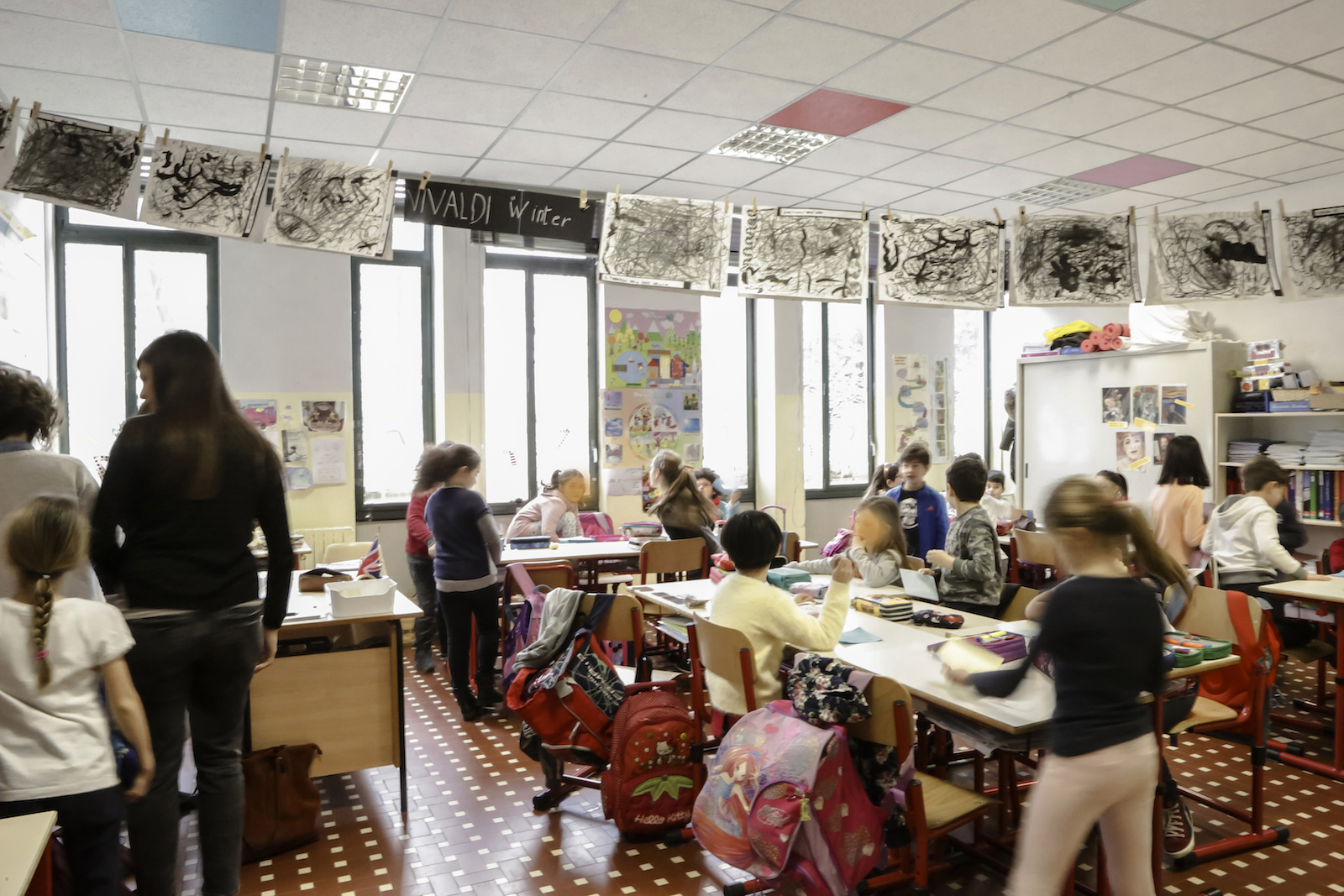 The Center, founded in February 2014, documents and studies standards and public policies on nutrition, built on the mission that the growing global population has a right to sustainable food. Their goal is also to support legacy projects of the world Expo Milano. For six months in 2015, over 20 million people gathered in Milan around the theme “Feeding the Planet, Energy for Life,” engaging in topics including school food and how we will feed 9 billion people on our planet by 2050.

Talk, Eat, Design was launched in January in six schools in Lissone and Caronno just outside of Milan’s city center which were chosen through an application process. Each group of students attend workshops based on two themes that expose them to food studies and design thinking during the Talk, Eat, Design program. The first lesson challenges the students to identify 10 vegetables on the table with the assistance of detailed descriptions identifying how they grow, are cooked and eaten. A typical slide reads, “I am long and hairy, green and a little white. You can eat all of me without any waste, even my flowers that are yellow and delicate.” (The answer is zucchini.) Students can raise their hand and identify the correct vegetable based on a collection of vegetables displayed on the table. 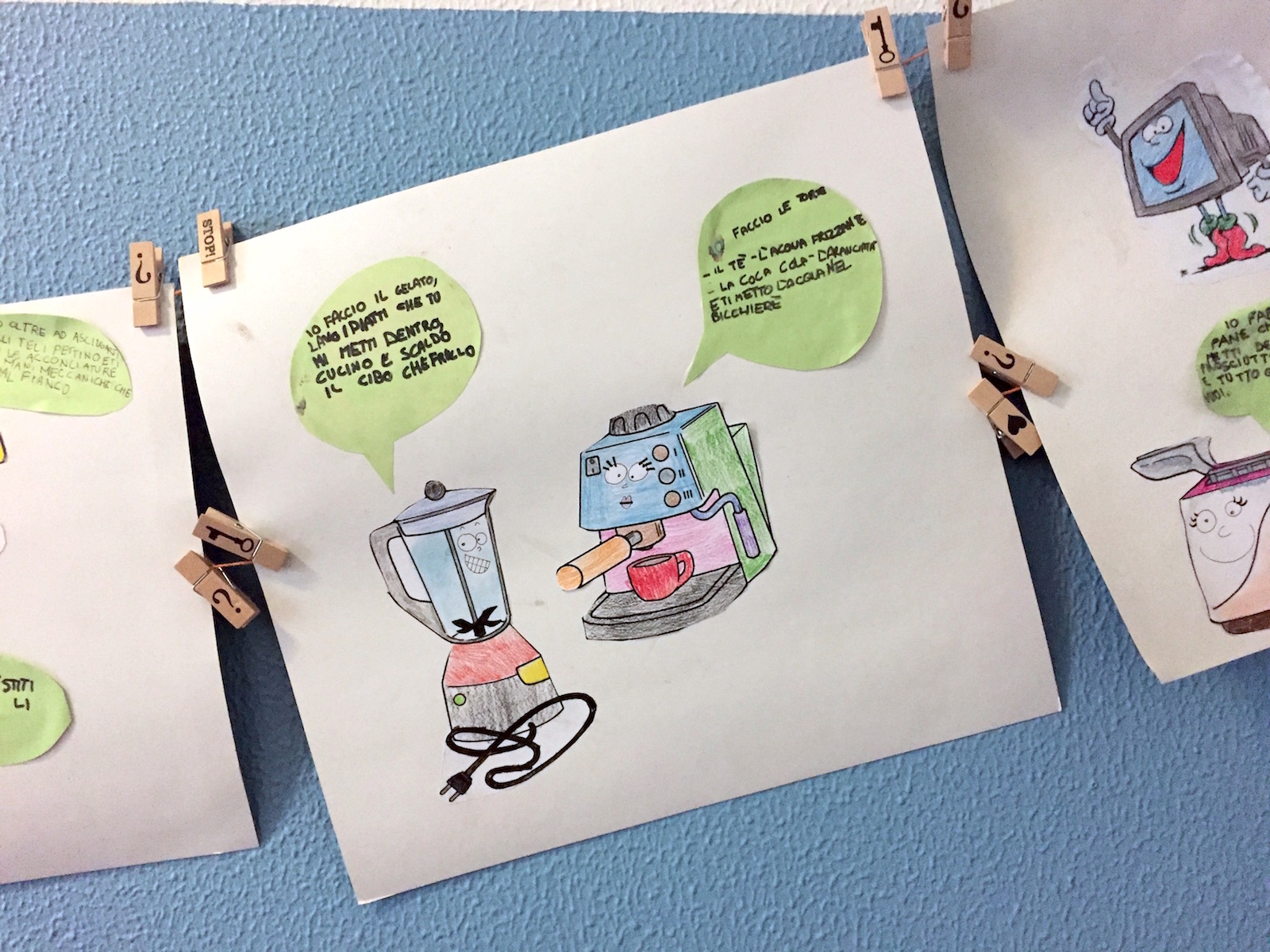 Next, the children are challenged to share their knowledge about eating rituals in international countries including the USA, Japan, Georgia and Eritrea. Another slide reads: “How do people eat in America?” Pictures of a delicious hamburger appears on the screen. As an American, I cower a bit, but this burger looks good and is not there to mock but to demonstrate that different countries have iconic foods that represent their cultures. The next slide is of a typical American restaurant. It looks like a spacious café with recycled wood and high ceilings, a place I would have enjoyed when I lived in New York. “Look at all the books on the shelves,” said the classroom teacher. “This restaurant almost looks like a library, doesn’t it?” Carlo Venegoni, Talk, Eat, Design’s project director, explained to me that the philosophy behind the program emphasizes the spaces where we eat; the atmosphere is often as important as food itself. 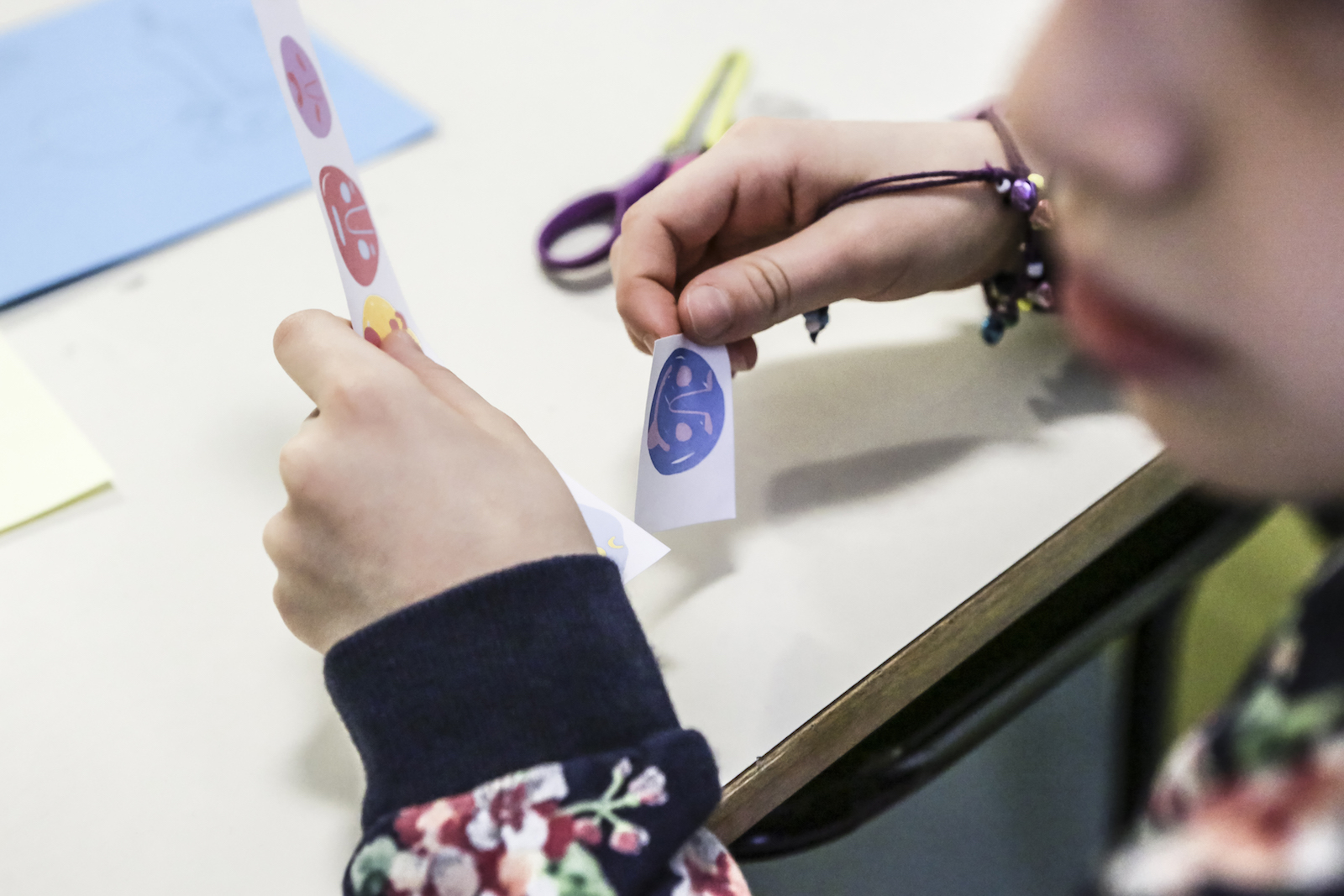 The second workshop theme is led by two accredited designers who brainstorm with the children about new ways to consume food. They share all the different ways the students might be able to improve their cafeteria from robotic lunch ladies to eating from an upside-down table. After the brainstorm, they make their ideas come to life by creating models from paper, markers, glue and tape. Using the models that they create, the designers leading the workshop will create professional models and drawings. Each school group will have their own design that will be shared at an assembly at the end of the school year.

The lead sponsor of Talk, Eat, Design is CAMST, the largest provider of school food in Italy, believes that student input will impact its understanding on how to adapt school food to the requests of all stakeholders: parents, government, teachers and children. “CAMST has supported this project from the beginning because they too are looking for ways to innovate the system. The parents’ standards are high and more of them are requesting meals that accommodate dietary, cultural and religious needs,” said Venegoni. 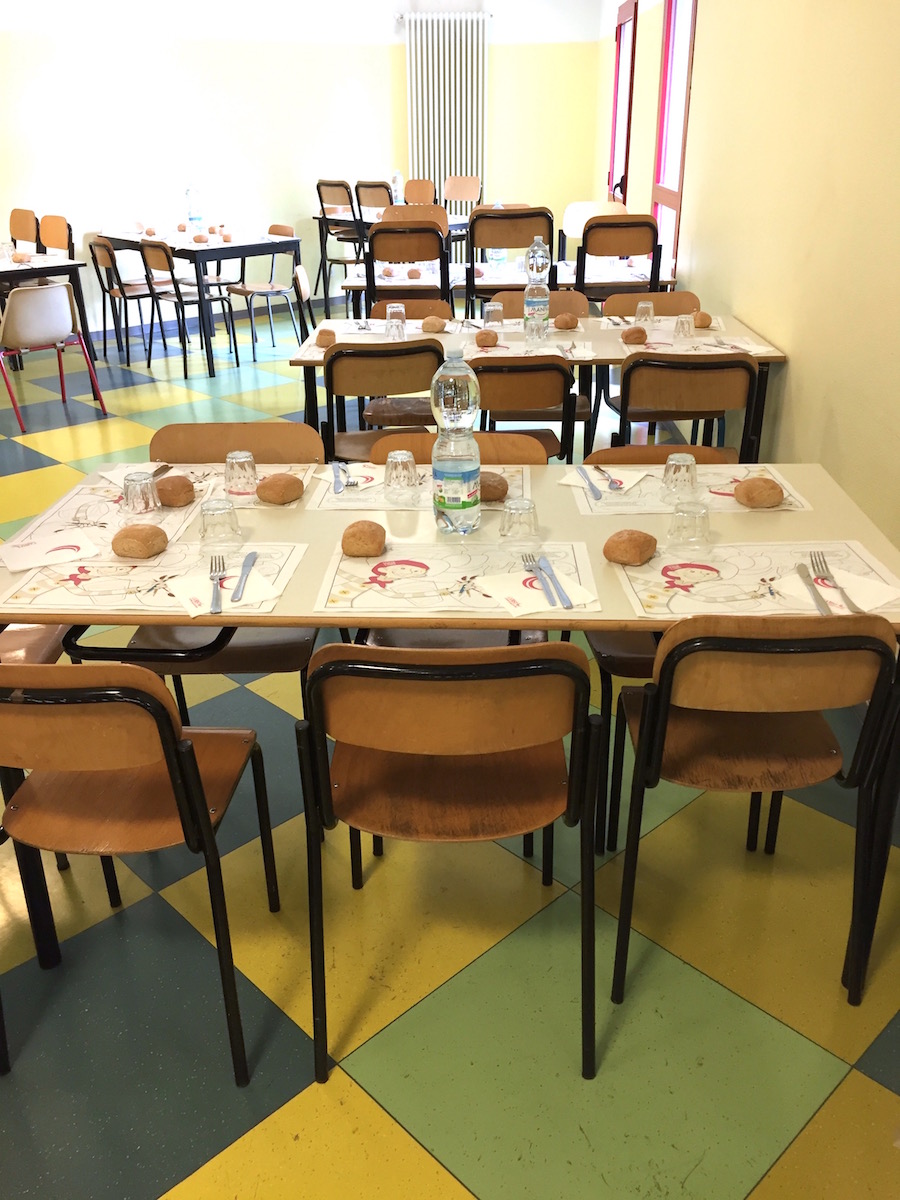 While this might sound like fodder for a Michael Moore documentary which examines school food, Italy spends almost four times what America spends on school lunch. Food costs are rising around the world and Italy is feeling the impact. “We’re expected to provide higher quality food to students with less money than before,” said Roberta Galbusera, director of special diets at the commissary cooperative kitchen owned by CAMST. One of the designers, Silvia Cacciamatta, works in a private studio as a service designer. “I design for the public, she said, “right now, I am working on a bike-share program. What sometimes lacks in our design process is really knowing who we are designing for. ‘Talk, Eat, Design’ is exciting because we are designing with the children, the end user,” says Cacciamatta.

At the CAMST cafeteria in Lissone, Roberta Galbusera, the manager of dietary restrictions, who also helped to develop the curriculum said, “We must be culturally sensitive to our students’ dietary needs as more migrants arrive at school. However, students require an official note from a doctor to officiate the request.” Each day, Galbusera works with the head chef to make healthy meals for students. The recipes change each season and are made in a commissary kitchen 10 minutes away by delivery truck from the school.

“The kids, designers and the food are not the only protagonists in this project. We’re asking them to look and even critique, their cafeteria. The location of where people eat is so important,” says Venegoni.

Last year, Venegoni and his four partners who are running Talk, Eat, Design, started CURE (Creativity for Urban and Rural Empowerment), whose mission is to stimulate, support and communicate collective processes for territorial re-generation and development in Europe. Trained as an architect interested in urban development, he met with the Associazione Amici della Casa della Carità. This organization works with the needy in the greater metropolitan area of Milan, assisting migrants from over 95 nationalities. Many are refugees who seek support in integrating into Milan’s society. With their support, Venegoni connected with the Milan Center for Food Law and Policy to bring the pedagogy of food studies to the program. “We made an open call to designers and we selected 11 from the several that applied,” Venegoni said.

When I enter the cafeteria at the end of the morning’s workshop, I observed that each table set for lunch has placemats, metal forks and knives, glasses made of real glass and fresh bread rolls. In the middle of each table is a large bottle of water for the students at the table to share. The tables look set for adults to sit down for a catered lunch. Venegoni marveled at the direct sunlight shining into the cafeteria and said, “This is not always the case. However, schools are now beginning to tackle food waste and further prioritize organic food.”

As we drove back to Milan through a corridor of furniture design factories, Venegoni mentioned that “Lissone is historically a hub of design manufacturing.” With their rich history of industry and enterprise, it seems appropriate for the next generation of food designers-in-training to emerge from this center of Italian innovation whose influence should resonate globally as school food evolves.