How small-scale GIY (Grow-It-Yourself) projects are influencing the manufacture of the furniture, tableware, and buildings of the future.

For their senior thesis at Philadelphia University, Merjan Sisman and Brian McClellan didn’t know what they would design—a frightening thought for any student nearing the end of his or her final year—but they both knew they wanted to create a product from a living material, so they partnered up and began a series of experiments that eventually led them to an unlikely source: mushrooms.

Typically, the soft, spongey spore is better suited for pasta dishes and pizza toppings than as a raw material for furniture, but the roots of mushrooms, as it turns out, are great for sitting on, eating on, or hard-wiring into light fixtures. Called mycelium, the roots are white and delicate-looking—you’ve probably seen the frost-like growth on the underside of leaves or stripped pieces of bark (see below). But when grown as a dense substrate for sprouting shrooms, mycelium is not only durable and sturdy, it that can withstand fires. 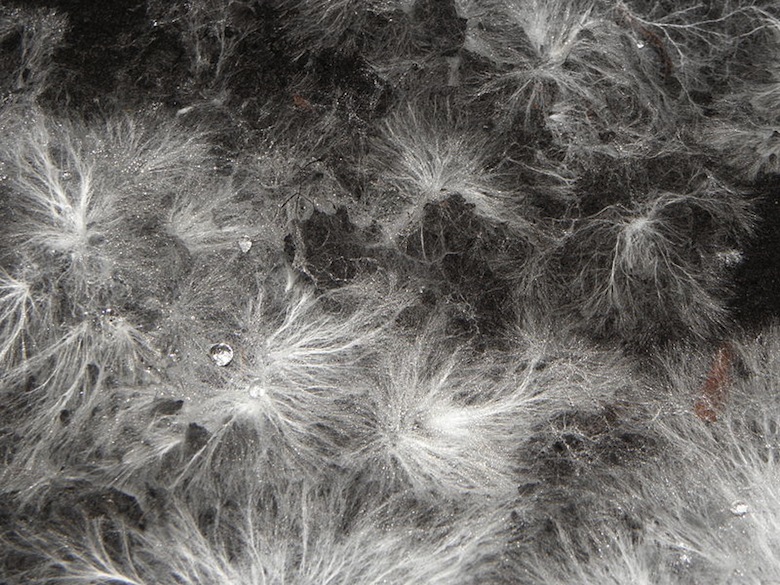 A handful of companies are testing mycelium for its consumer potential, mostly as a substitute for Styrofoam, but according to Metropolis, which featured Sisman and McClellan in a recent issue, it hasn’t managed to attract many designers yet, as the properties that make it such an appealing material are also what make it so difficult to work with. Yes, it’s a low-energy, 100% compostable substance, but it’s also a living, growing organism, which means that while you can attempt to tame it, mycelium ultimately has a mind of its own.

Unsurprisingly, Sisman and McClellan spent several months trying unsuccessfully to make mycelium a more pliable material by tweaking its growing conditions. Eventually, McClellan said, they “found that more moisture and less air made a denser material.” Once this part of the recipe was ready, they created molds (McClellan made the lighting and Sisman, the chair), waited several weeks for the mycelium to grow inside them, and then spent another week drying it out, using sunlight or an oven to effectively kill the mycelium and stop growth. A full week in an oven might seem like a lot for a simple, half-dome lamp shade, but these roots are resilient–not enough drying time and your pendant lights will start to sprout new mushrooms.

Sisman and McClellan chose to leave their mycelium-made designs in their raw state. “We wanted it to look like itself, not wood or metal,” she said. But in its final, thoroughly dry and rigid state, mycelium can be sanded and painted like any other material, making it more than just a curious student experiment, but a viable option for commercial projects. Ecovative is currently working on applications for construction, automotive, product packaging (with Puma), and even surfboard manufacturing.

Next steps: If you live in San Francisco, you can learn how to make your own mycelium products in a class taught by mycologist (a.k.a. mushroom expert) Philip Ross.

Recommended reading: “Blood Spore: Of Murder and Mushrooms,” a bizarre and fascinating account of the mysterious death of one of the world’s leading mycologists, published in Harper’s July 2013 issue.