One year ago, Expo Milano 2015—probably the largest food event in modern history—ended and the experts that had gathered for hundreds of food-related events, returned to their countries to consider new food policies and systems. The theme of the Expo was “Feeding the Planet, Energy for Life” and it ran for six months, with 145 participating countries and 22 million visitors from all over the world. While there is no question that the event was highly successful and established Milan as a global capital of food policy action, the question on many minds is “What is the legacy of the Milano Expo 2015?”

Last month in Rome, one answer was served up: the annual Mayors Summit for the Milan Urban Food Policy Pact (MUFPP). On the UN Food and Agriculture Organization’s (FAO) World Food Day during Expo Milan 2015 the MUFPP was first presented to UN Secretary General Ban Ki-Moon. The MUFPP now has a total of 130 signatory cities. It represents one of the most important legacies of the Expo. 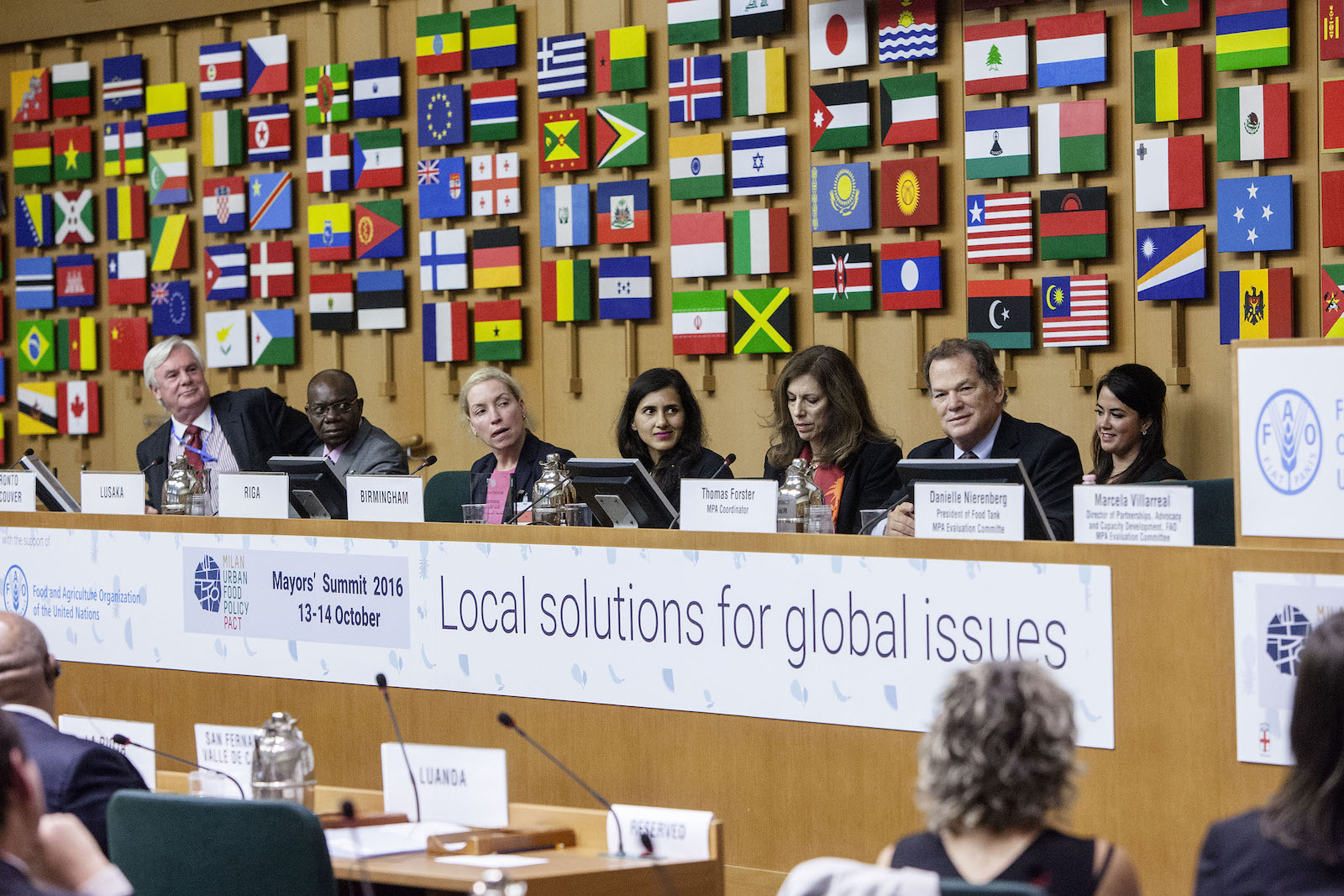 Not only did Milan initiate the pact but it will also monitor the cities’ progress and organize a yearly summit for participating cities to be honored for their achievements. With more than half of the global population living in cities, an estimated 6 billion people will move to conurbations by 2050. The UN goal to reach zero hunger by 2030 will not be accomplished without the active support of cities. The MUFPP commits the signatory cities to develop sustainable policies, programs and initiatives across all sectors that impact urban food systems. It also provides an extensive “Framework for Action” and e-book, highlighting forty-nine good food practices from twenty-eight signatory cities.

As part of World Food Day on October 14, Milan’s Mayor Giuseppe Sala declared that “Milan continues to build the global council of urban food.” Mayor Sala, along with forty-nine other mayors, gathered last week for this second summit. The third will be in Valencia, Spain in 2017.

Moderated by Food Tank’s Danielle Nierenberg, the MUFPP Award winners include Mexico City and Baltimore. Each of their Food Policy Councils received 15,000 euros. Mexico City won for its Community Dining Rooms Program consisting of a network of two hundred affordable restaurants that employ the marginalized populations within the city and feed them healthy food. In Baltimore, where one of every four residents lives in a food desert, its Food Policy Initiative was recognized for addressing health, economic and environmental disparities through substantial strides toward access to healthy, affordable food.

Within the six categories of the MUFPP framework, Special Mention Awards were provided to six cities:

Over 150 countries celebrate World Food Day every year. And now, 130 cities and counting will have an increasingly relevant political and economic role to play as they ensure all people the right to a healthy nutrition without jeopardizing the future of the planet. This important undertaking is one Expo legacy that will be everlasting.

Another Expo legacy is apparent in Milan’s additional initiatives that provide a profound impact on food systems. Milan’s collection program for composting, which began in 2014, is known to be one of the largest in the world. Moreover, Milan also has a strong history of agriculture which continues to develop and thrive. Nineteen percent of Milan’s land is considered agricultural land. An association of thirty-one farms, known as Consorzio DAM, continues to cultivate forty-one percent of the land devoted to agriculture. Esselunga, one of Milan’s largest grocery store chains with thirteen grocery stores in the city, sells Consorzio DAM rice, cheese and fresh vegetables as of last year. This fall, Milan’s public schools began serving locally sourced rice in their cafeterias and, in order to cut food waste in schools, children receive durable multi-reuse bags so that they can save their school snacks instead of disposing of what they do not eat. Last week, the European Union’s European Regional Development Fund granted to Milan 6.2 million euros to build a state-of-the-art agricultural food hub on the site of one of Milan’s 61 farmhouse cascinas, Cascina Nosedo, five miles from the city center. With a growing number of chefs sourcing local products and school garden initiatives popping up throughout the city, Milan’s efforts go far beyond the commitments in the MUFPP.