Methods & Provisions is a series documenting the memories, rituals and soundtracks of people who love food.

Mirna Bamieh is the artist, researcher and chef behind Palestine Hosting Society. Her live art project brings people together to explore traditional food culture in Palestine, particularly those that are on the verge of disappearing. Bamieh travels across occupied Palestine collecting recipes, ingredients and stories with the goal of preserving a culinary heritage. Her dining performances combine food with storytelling in order to ensure the cultural future of a Palestinian kitchen perpetually under threat by displacement and appropriation. Bamieh’s latest installation, which explores the processes of fermentation in an on-site kitchen, is a part of the show Everyday Forms of Resistance, and is now on view at the Ujazdowski Castle Centre for Contemporary Art. We catch up with Bamieh on the memories and rituals that define her practice and the artist shares a playlist of what she’s listening to now.

Tell us a little bit about yourself and your practice.

I’m an artist. My practice, which prior to Palestine Hosting Society was also in video and installation, has always dealt with the politics of disappearance. I have always been interested in making memory disappear and seeing what is left. When I talk about disappearance I am talking about that in relation to the Palestinian nation—a nation that has been forced over and over to make itself visible because somehow the world is making it disappear whether it is through colonialism or occupation. As Palestinians, we have had to somehow defend our humanity for centuries. When I [first] started working with food, people would say: “How come you work with food for a people that do not exist?” That was very harsh, but it shows how we are always being rendered invisible as a nation although we have roots, memories and ancestors in this land. So throughout my work I think I am trying to eliminate memory and see what is left of a person or an identity. I am trying to eliminate the land from specific events and see what is left of people and the event. I am trying to eliminate my body and replace it with images and see what is left of the story.

What are the origins of the name Palestine Hosting Society?

When I wanted to find a name for my project, I knew that I wanted Palestine in the name because it was all about bringing Palestine forth by talking about the cuisine and kitchen of a  place that has been appropriated over and over. I wanted to bring hosting and hospitality to the equation as well. Palestinians have always been on the receiving end of hospitality. We are always being welcomed by others because we have no control over our land, our houses, our water, our air, or culture. So I wanted to reverse this and reclaim this hospitality act, especially because we come from a nation of hospitality, and while this value has always been a part of our culture, the substantial space for it has been taken away. And lastly, society because I wanted to bring people to the table, to reclaim it and bring people together, and somehow create change from that table.

Topics of appropriation and preservation are central to your work—how can food be an act of reclamation or resistance?

There are many reasons why dishes and food practices disappear. Part of it is a global [phenomenon]—all cultures have lost some of their indigenous practices and ancestral knowledge when it comes to food, preservation and fermentation simply because of the change of time, modernity and the industrial revolution. People do not have the same perception of time [as they did] 50, 60, or 70 years ago. Throughout that time recipes keep fading. When you don’t have the time to make these recipes, you forget about them.

For the Palestinians, there are other, more political reasons why our dishes have disappeared. Sometimes we stop cooking dishes or forget about dishes because they are very linked to trauma. For example, the first exile by Israel in 1948 to coastal cities. I come from Jaffa and my family had to leave in 1947, we had a feeling something was going to happen, so we went to Jerusalem. So many people left— parts of them went to refugee camps all over the world, some of them went to Gaza, some of them formed the diaspora, those who had money went abroad to family to stay with them. When you link food to a traumatic event, some dishes just stop getting cooked because they link you to that [traumatic] memory. Of course, at the same time, other people link food to the memory of the place they want to carry with them. That’s why diasporic Palestinains carried so many food memories with them, as an attempt to recreate a sense of home for their children.

Being forced to leave your home is one part of why you leave your kitchen memories, but in that you also see families separated from their neighbors and their extended family. So, dishes that needed a group of people to cook together are no longer possible, and you couldn’t do it like it used to be done. Because now, you are in a refugee camp, or you are staying in a tent, or you get a quota on rice and beans over a long [period of] time.

Other reasons are [being perpetuated by] things that are still happening, specifically mobility and the freedom of movement. Palestinians do not have the freedom of movement in Palestine— people in the West Bank cannot go to the occupied parts, they cannot go to the Israeli parts because they have different IDs. We cannot go to Gaza and they cannot come to us, it is a small prison [there]. So people in the West Bank cannot go to Galilee, they cannot go to Jaffa, they cannot go to Haifa, and therefore they cannot know the kitchens in those areas. [With Palestine], we are talking about a land that has so much rich agriculture. This was a farmer nation, which was ruptured and somehow taken away from us. So many recipes and ingredients disappeared because of this disruption, when we went from a farmer nation to one of workers. [Through my research], I learned that the land [across Palestine] is different, there are so many different dishes. And so there are specific reasons for disappearance for each recipe. For each dish we ask these questions: Who cooked it ? Why did they stop cooking it? Who used to live in this city, in this place? Did they leave? Did the memory of the dish leave with them? Did they leave it behind? Was it altered because it was left behind? Did they move to a new place and change it to the taste of that dish?

What are your early food memories that you continue to return to in your own practice?

I have many food memories, actually. My mom is Lebanese, she’s not Palestinian, she got married to my dad when she was really young, like 19. When she first got married she didn’t even know how to fry an egg, and then she was pregnant with me after 1 month of getting married. She didn’t have access to her family, there were no cell phones and calling overseas was expensive, but even so she would call home to ask about recipes. When she got married, she had this cookbook called the Alphabets of Cooking, it’s a Lebanese cookbook and I still have the copy now. She was learning how to cook as she went, and because I was the first born I still remember how much my mom was learning and experimenting. Turns out, she’s a great cook and had exquisite taste. Growing up I grew up with her hosting those beautiful tables and dinners and people would always admire her food. She was empowered by the kitchen and by the act of hosting, of having people and having this talent in the kitchen. As a kid I viewed my mom as a magician making these dishes and hosting these gatherings. As a result, I was always fascinated by cooking shows, the figure of the chef was always the figure of the magician for me.

I never thought that I would make a living out of cooking and out of being a chef. But I think I found my element when I started this project and started hosting people as a part of my art practice—that made everything fall into place. I think the seeds of that were implemented early on because my mom found her place in the kitchen as well. Not in a demeaning way, but because the kitchen is where she gathers people, where she creates a community because she is not from Palestine. It is also [through] the kitchen that she created connections with her homeland as well. For me those moments are what shaped me as a kid, an adult and a woman growing up, me and my sisters were always watching her in the kitchen. As a result, I always knew how to cook—I didn’t learn. It’s a knowledge that was embedded in my body without me realizing from the time I spent in the kitchen with my mother.

When you are in the kitchen what music do you like to listen to?

Actually, the earliest songs I heard were in the kitchen with my mom. There was this song by Fairuz, who is a music icon in the Middle East, about a man who goes to the bus where he sees Alya, this lady with the beautiful eyes, and the song is about him observing the other passengers in the bus while he talks to this woman with the beautiful eyes. I remember listening to the song in the kitchen for the first time, just fascinated by the cinematic imagery of the song. I don’t listen to the same songs now as I did with my mom, all of the songs we would listen to were about heartbreak. I was a kid! What did I know about heartbreak?

The music I listen to now passes in phases. Right now I’m into Hippie Sabotage and Agar Agar, but before that there was a phase where I only listened to Mashrou’ Leila, this Lebanese band. There was another [phase] with this Palestinian rap singer and I love his music. So I love to make a playlist and put it on in the kitchen when I am cooking alone, but when I host people I usually don’t put on music because we love to talk!

Overall, music is very important to me, at my dinner performances, I commission a musician to perform for our tables.

What are the rituals and routines that are a part of your practice?

Routine is something that I usually struggle with. But when I am creating a table, something I do I something I do is I make so many lists. I try not to smoke at all and I try not to have coffee. Before each production, which consists of two days of cooking, one day of performance, the whole day before performance. It’s quite intense because my tables are usually 13 courses and 65 seated guests, and everything on the table is intentional from the centerpieces to the plates to how things are plated, from the napkins we print. Every single detail is thought of. I usually go into the zone those two days. I just cook and cook and cook and wake up and write in my journal. This moment of having an herbal drink or juice is important for centering myself before a performance, then I eat a light breakfast because that’s the only thing I’ll eat before the entire day.

Listen to Mirna’s full playlist below. 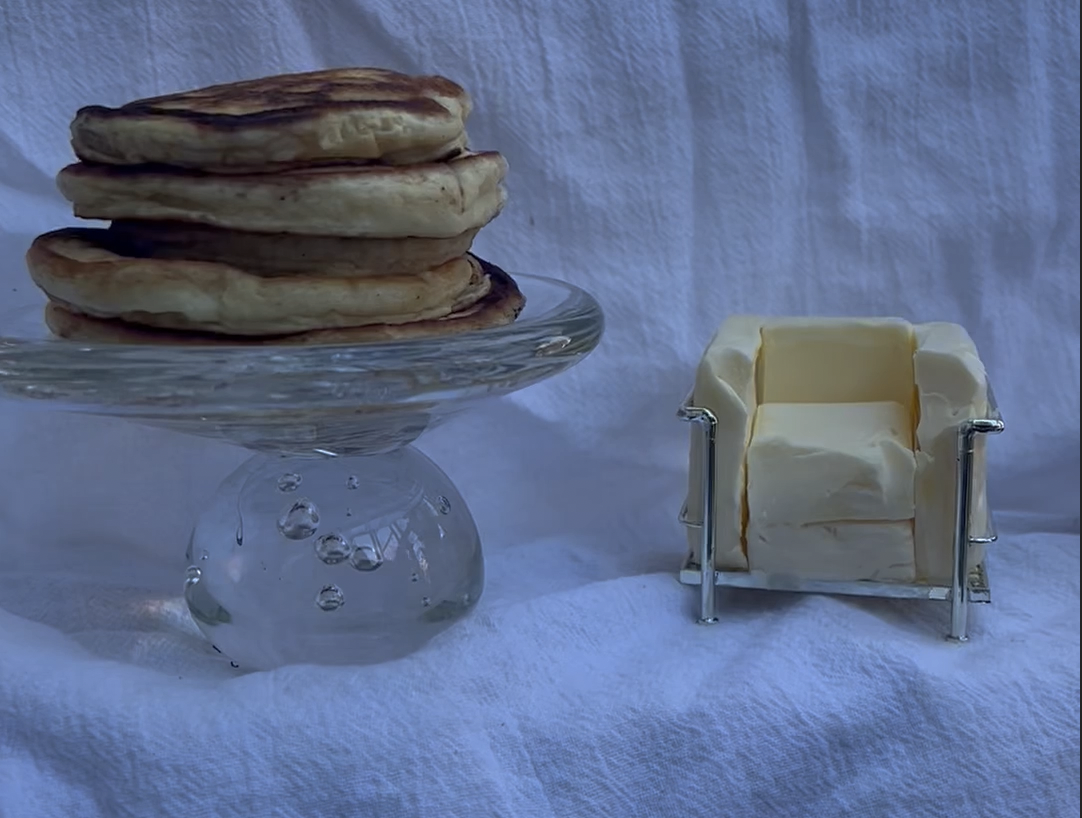 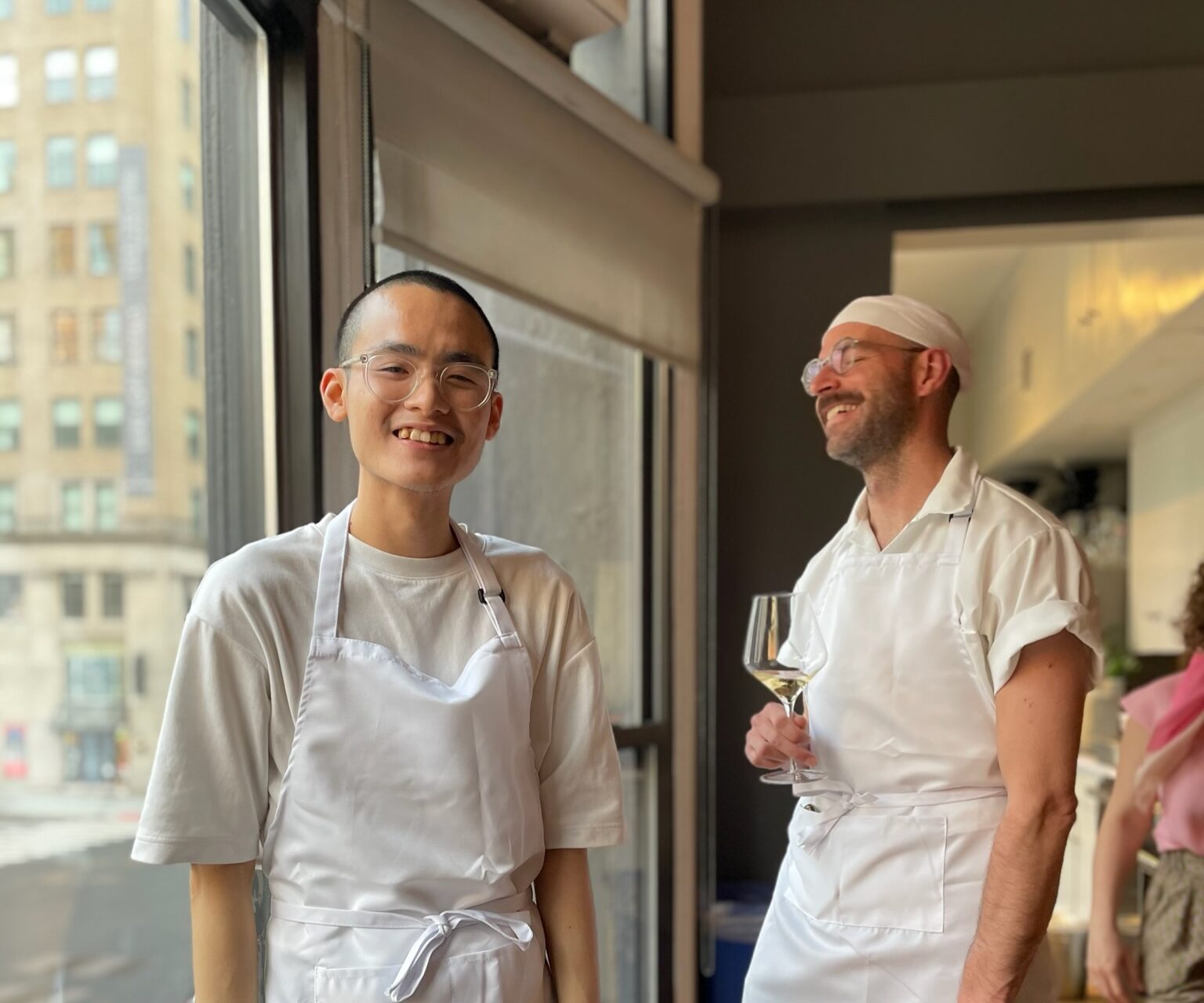 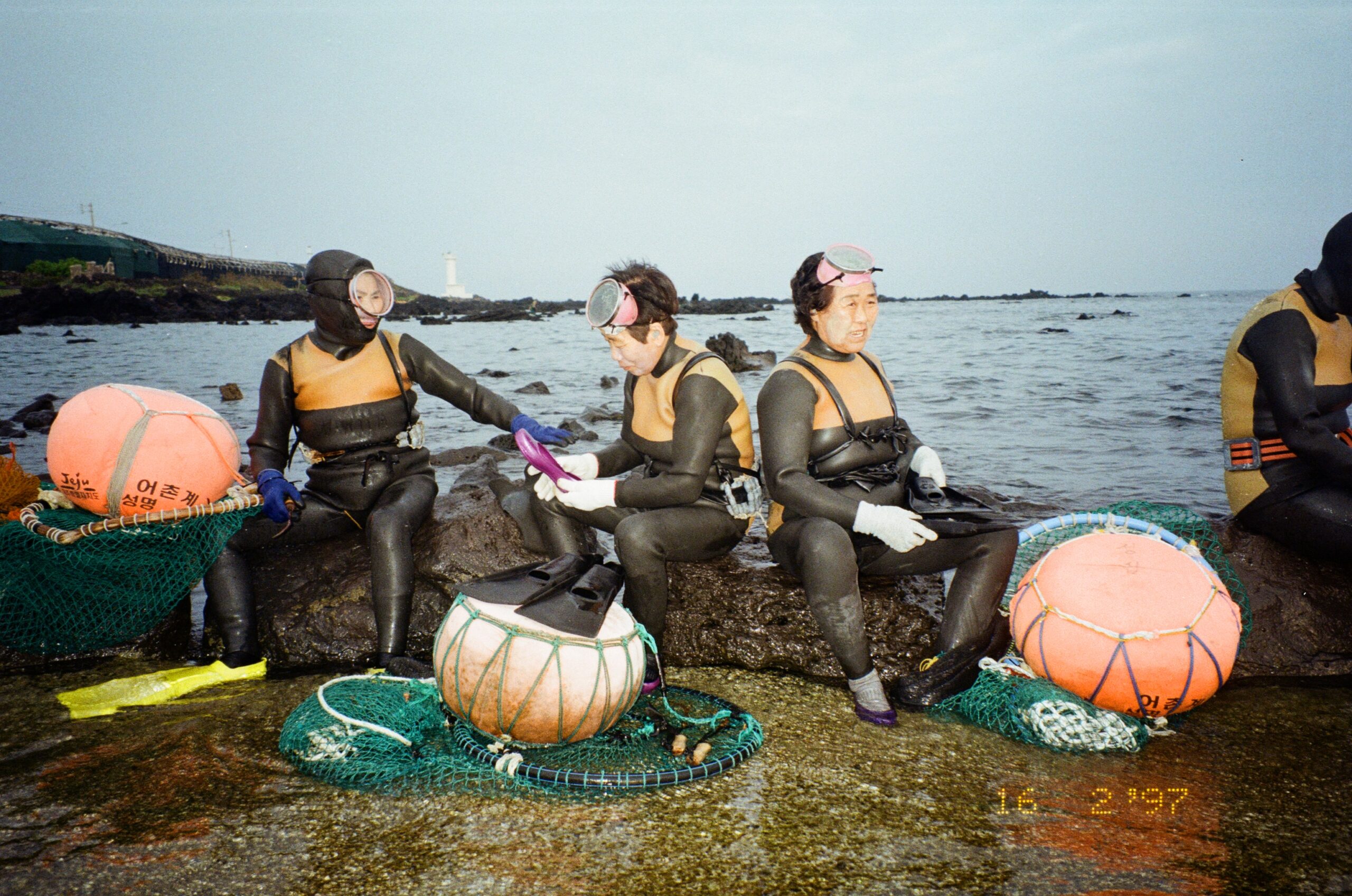 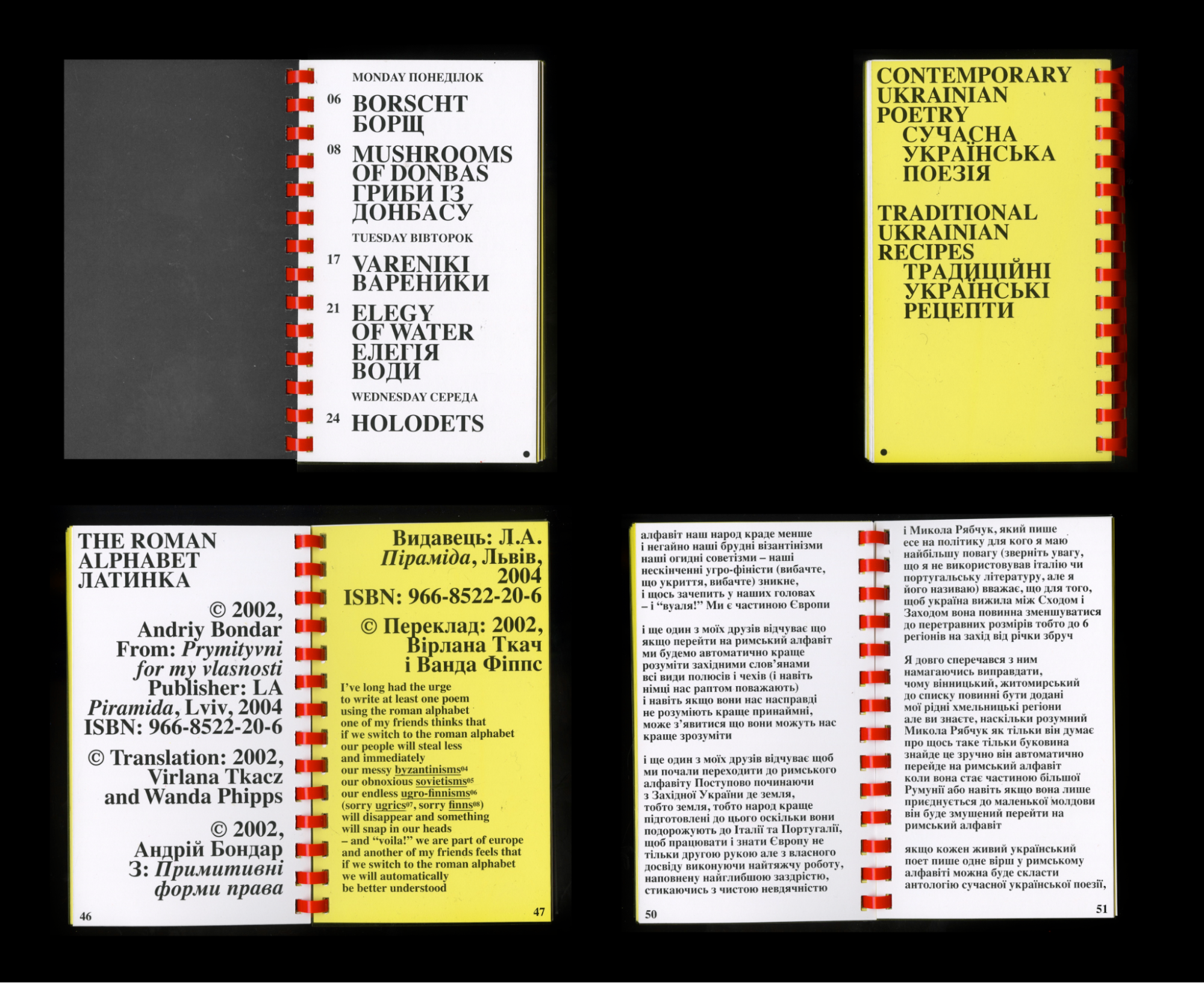