From soap to bread, palm oil appears in nearly 50% of consumer products. It’s the most widely consumed oil and the most efficient source of vegetable oil.

But palm oil production is also a leading cause of deforestation. In Southeast Asia more than 6 million hectares (roughly half the size of the UK) has been turned into palm plantations in the past 10 years.

How to handle this dire situation?

Biteback wants to replace palm oil with insect oil. The company was founded by a group of Indonesian students and grows and harvests mealworms to extract their oil.

Among the benefits are a reduced stress on the land—insect oil produces 7 times more oil per acre as compared to palm oil—and the presence of vitamins and nutrients such as iron and protein, absent in traditional vegetable oils. With oil properties meeting or exceeding those of palm oil, Biteback Insect Oil is both a strong competitor in a global oil market and a smart solution to the problems caused by palm oil deforestation.

For those skeptical about eating bugs, Biteback has performed extensive tests to make sure there’s no insect aftertaste. Biteback has begun to collaborate with R&D departments at Europe’s top food companies to help ween them off palm oil. Various European chefs have also expressed interest in using the product for cooking. But the product’s potential is not limited to food. Biteback is also urging cosmetic companies, especially eco-friendly ones, to swap palm oil for insect oil. 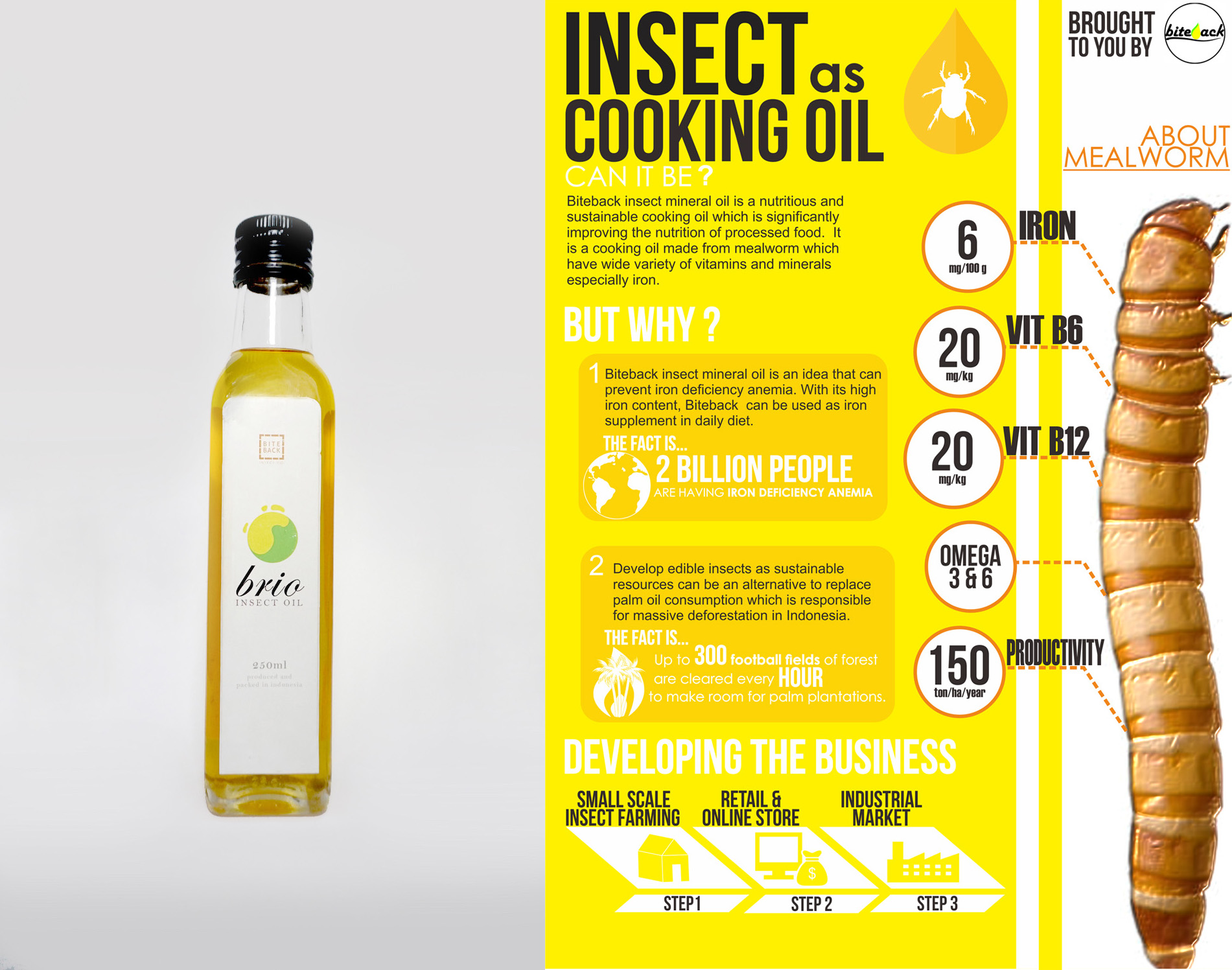 Insect oil bottle prototype and the case for mealworm oil. Image via Biteback.

Biteback Insect Oil was awarded the runner-up prize at the 2016 global Thought For Food Summit in Switzerland. They were also selected to participate in Start Up Boot Camp FoodTech in Rome Thanks to the media attention and funding brought about by their recent success, they are optimistic about their potential to attract the investment necessary to begin full scale production in 2017.

Are you working on a project that will impact the future of food? Thought For Food wants to hear from you! Thought For Food is a global movement that empowers and supports university students from around the world to create solutions to feeding 9 billion people by the year 2050. Last year’s judges include representatives from IDEO, Village Capital, AgFunder, Openbox, and FoodFresh. The 2017 contest is now open and accepting entries until January 15th, 2017.