As with most challenges, having the right tool for the job can be the critical difference between failure and success. With the rise of industrial agriculture in the United States in the ’60s, the market for new technologies and tools for small scale producers all but disappeared. Now that is about to change. A group of farmers, engineers and manufacturers have been actively developing, advocating for and distributing Slow Tools—appropriately scaled, lightweight, affordable and open-source tools for small scale farmers. 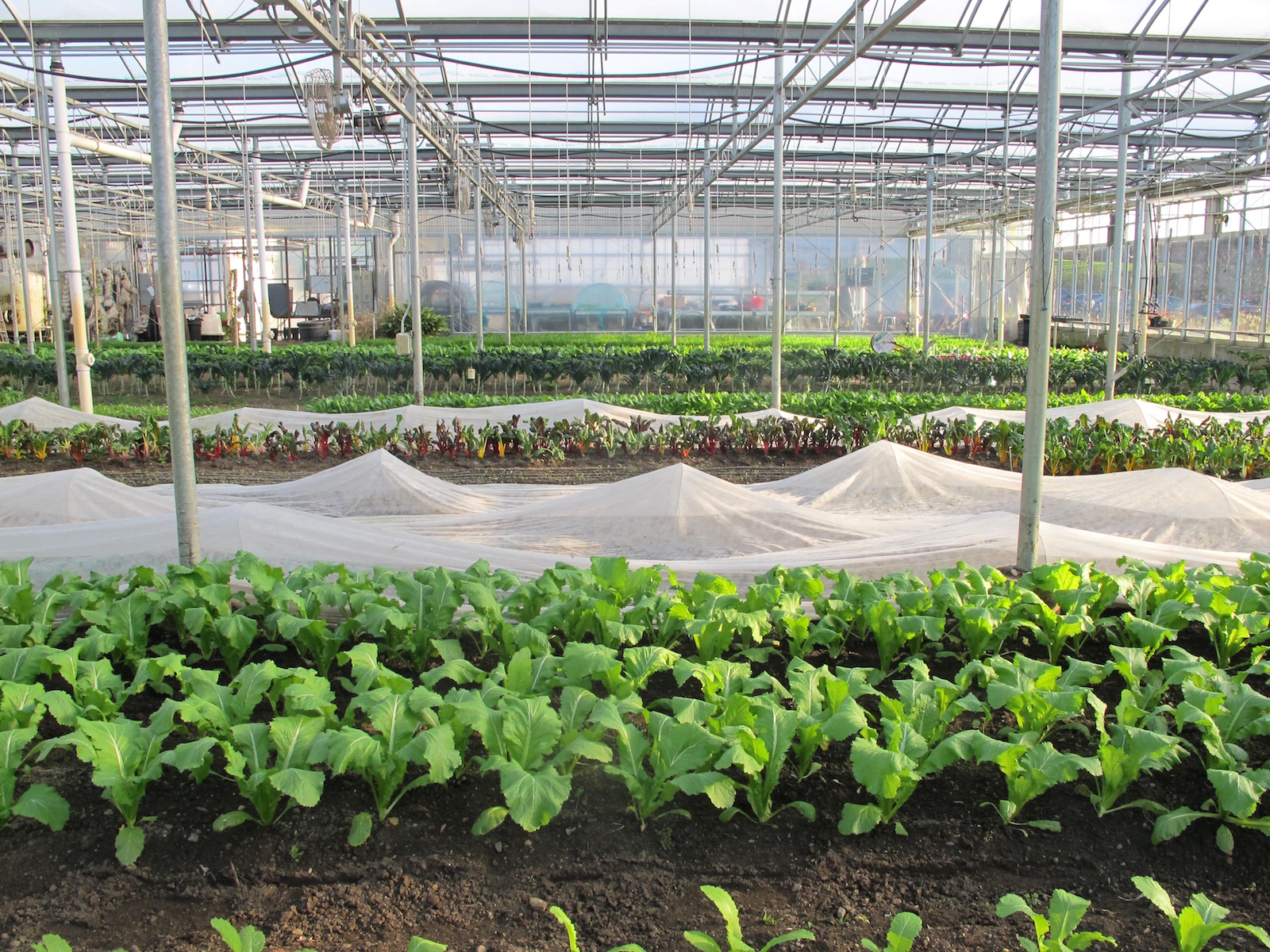 What started as a working group that met the weekend after the annual Young Farmers Conference has slowly become a movement for the design of scalable equipment for independent farmers. The group launched in 2011 by identifying 34 tools in need of development with plans to design a small, open-source electric tractor that could support a host of other implements including bed shapers, cultivators, precision seeders, harvesters and material spreaders. As Barry Griffin, the project’s lead design engineer explained in a statement about the launch, “Nearly all of the tractors and their implements used by small farmers disappeared during the rise of the current global industrial farming system, beginning in the 1960s. The re-emergence of small-scale farming has created a need for small tractors and other tools and implements capable of performing traditional and newer farming tasks more efficiently and ergonomically.” 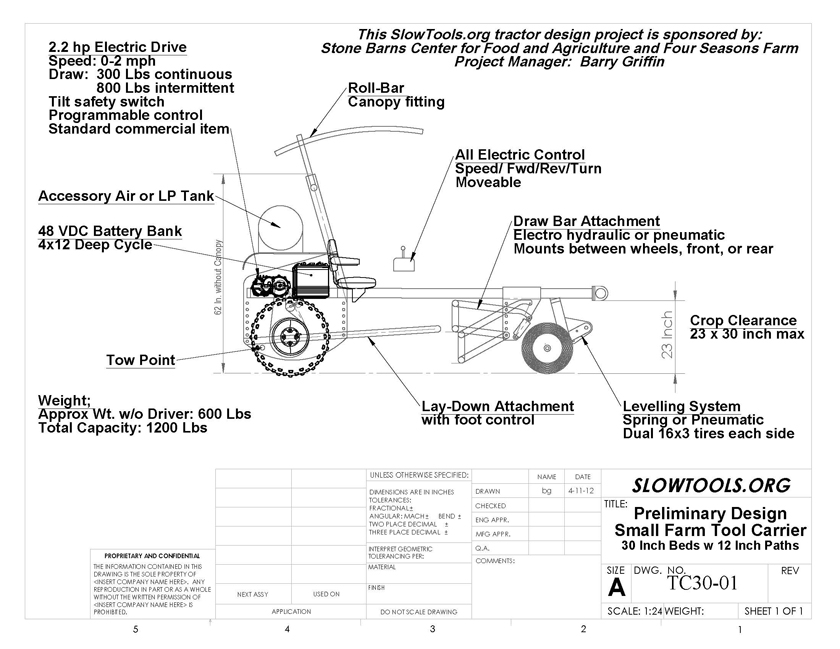 Today, “the list of 34 tools is a relic although most are still being worked on presently,” Jack Algiere, the Farm Director of Stone Barns Center, told MOLD. “The focus of the group has expanded but in general is divided into these categories: electric power equipment, cultivating tools, washing/packing equipment, structures (greenhouse/tunnels/coops) and energy systems (O2 compost radiant heating, AD systems).” The Slow Tools working group is being incubated by the Stone Barns Center for Food and Agriculture, an 80-acre working farm in the Hudson River Valley just 25 miles north of Manhattan. The farm serves as a lab for resilient, sustainable agriculture and is a center of vegetable, livestock and soil-building experimentation and demonstration. Besides their farm and educational activities, Stone Barns also trains young farmers through their Growing Farmers Initiative, hosts the annual Young Farmers Conference and manages the Virtual Grange, an online community for beginning farmers. Leading the conversation for Slow Tools are longtime advocates for sustainable agriculture including Eliot Coleman, pioneer of the American organic farming movement, inventor and author from Four Season Farm in Maine, Ron Kholsa, organic farmer and engineer of Huguenot Farm in New Paltz, Josh Volk of Slow Hand Farm in Oregon, Adam Lemieux, Product Manager of Tools and Supplies for Johnny’s Selected Seeds, Barry Griffin, design engineer, and Jack Algiere.

In December the group celebrated their fifth annual Slow Tools Summit with tool and prototype demonstrations in the Stone Barns Center greenhouse. In his introduction, Jack Algiere marked the importance of the group’s progress explaining that “Some of the things that have been innovated have really changed the systems we’re working in and made it a lot more efficient, comfortable for our bodies, and as I’d like to say, a little more intimate by getting us back into the soil and not so disassociated on top of the machines.”

As part of their mission to co-create Slow Tools with designers, Algiere hosted a mechanical engineering student from Purdue last summer who worked on two main projects: the design of a bed-shaper tool for the greenhouse and improvements to the Stone Barns radiant compost system (if you’ve eaten anything sous vide at Blue Hill at Stone Barns, it was probably cooked using the captured heat from the compost). Eliot Coleman also hosted two student engineers at his farm. Sharing one story from their collaborative process, the students worked on finding a solution for protecting young plants from cucumber beetles. 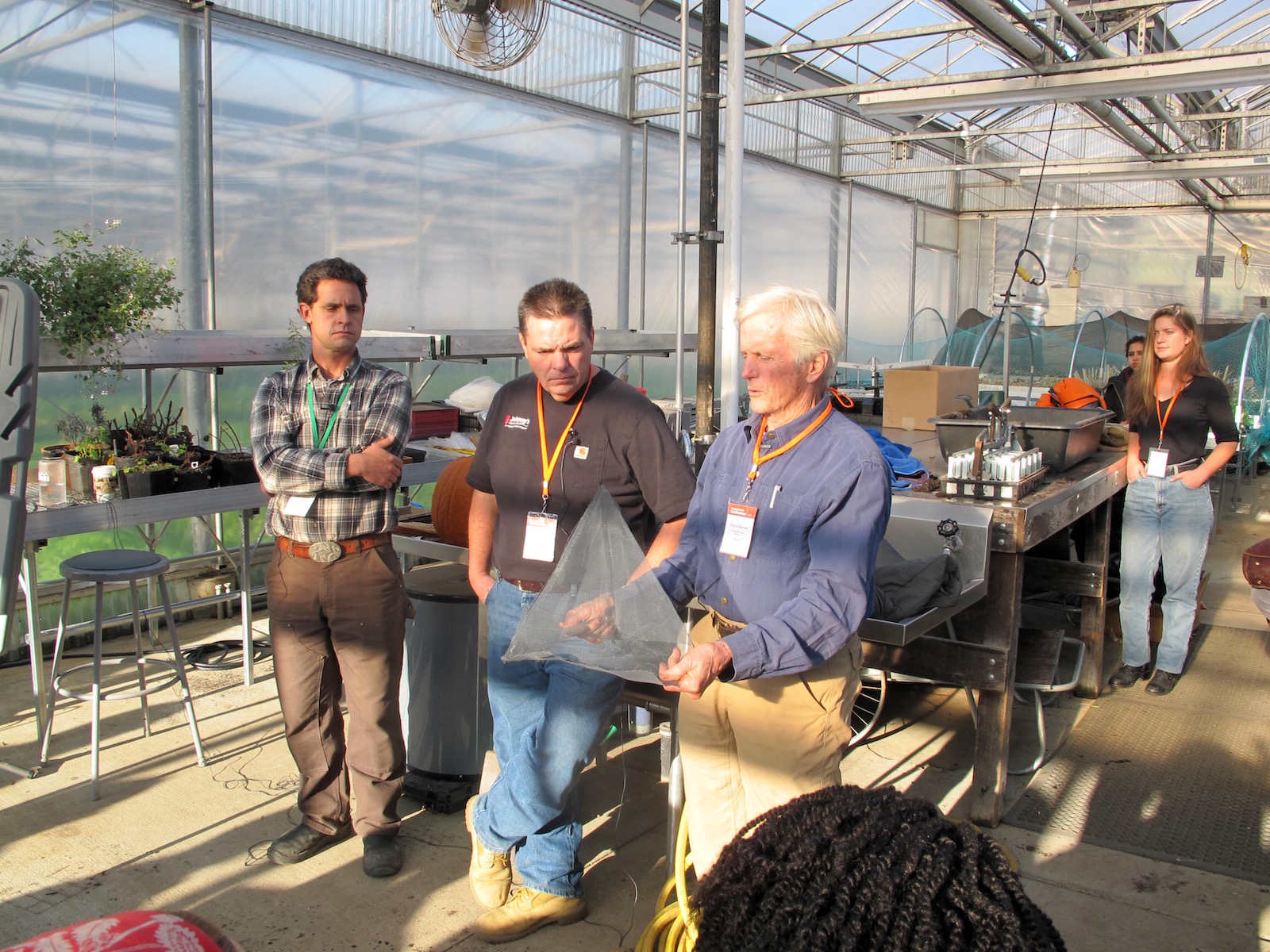 From left to right: Jack Algiere, Adam Lemieux and Eliot Coleman at the Slow Tools Summit. Coleman shows a prototype for a cucurbit transplant protector co-created with engineering students.

After developing a cheap solution involving cutting out window screens and staking them into the ground, Coleman pushed the engineers to design a solution that produced little waste, cut down on labor/time and cost even less. The second prototype was a folded tent that could be held down with soil. “I love this because it’s an example of thinking past the first solution to the simpler and less expensive solution.” 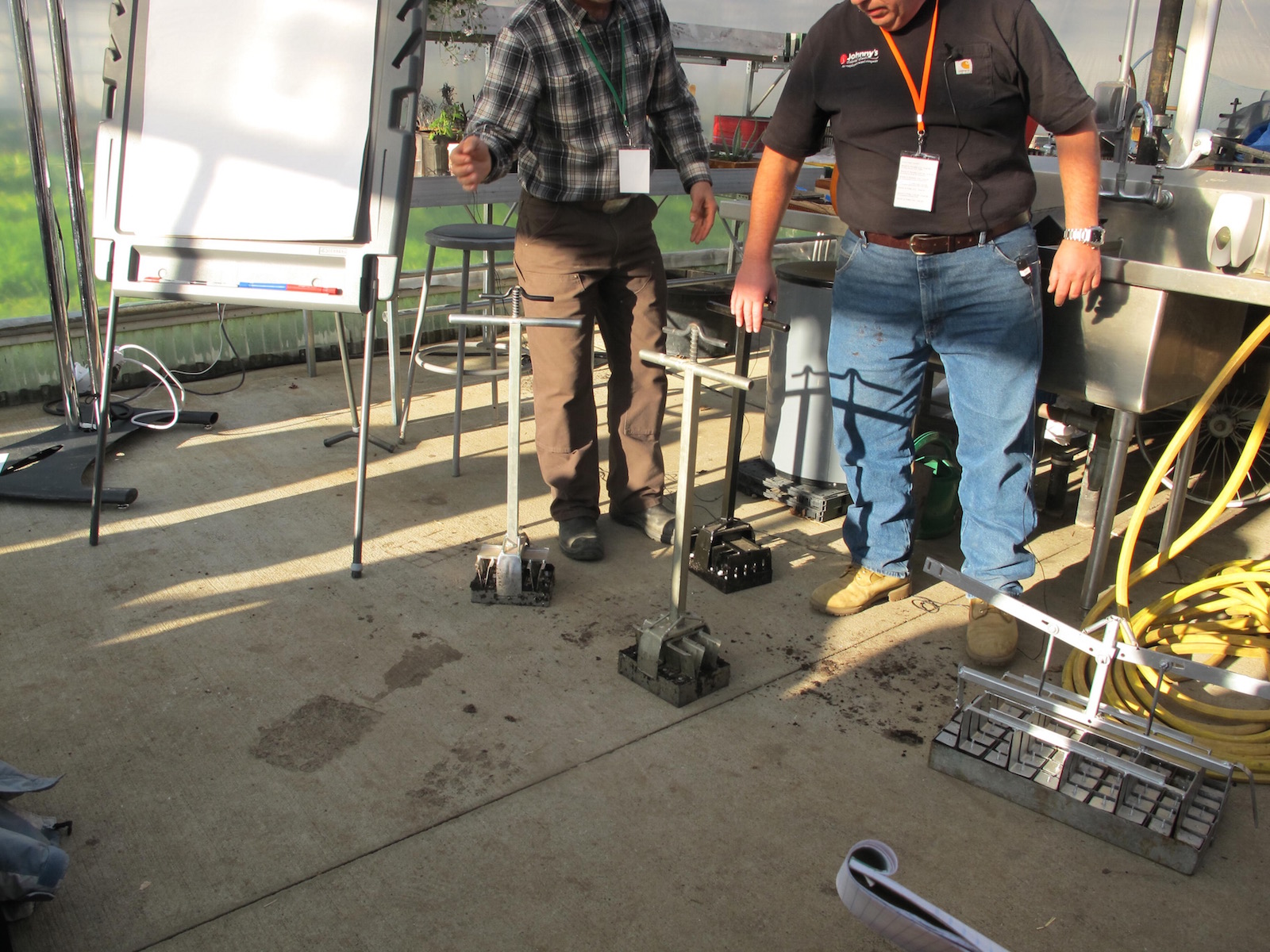 Adam Lemieux shared the story around prototyping the group’s most recent tool, a soil blocker for the standard size 1020 germination tray. For years, small-scale farmers have been hacking the standard trays to work with the available soil blockers. Until last year, no one had addressed why these two tools didn’t work seamlessly together. The group realized that the soil blockers from Europe were designed to fit standard European trays and that the 1020 tray was an American standard. Now, the group is working with an English manufacturer to prototype and test a model designed to fit with American standards. This singular example highlights the potential for design to revolutionize the way that small to medium scale farmers produce and harvest food.

Below are eight tools shown during this year’s Slow Tools Summit that demonstrate the needs for ergonomic and efficient design solutions for small-scale farmers: 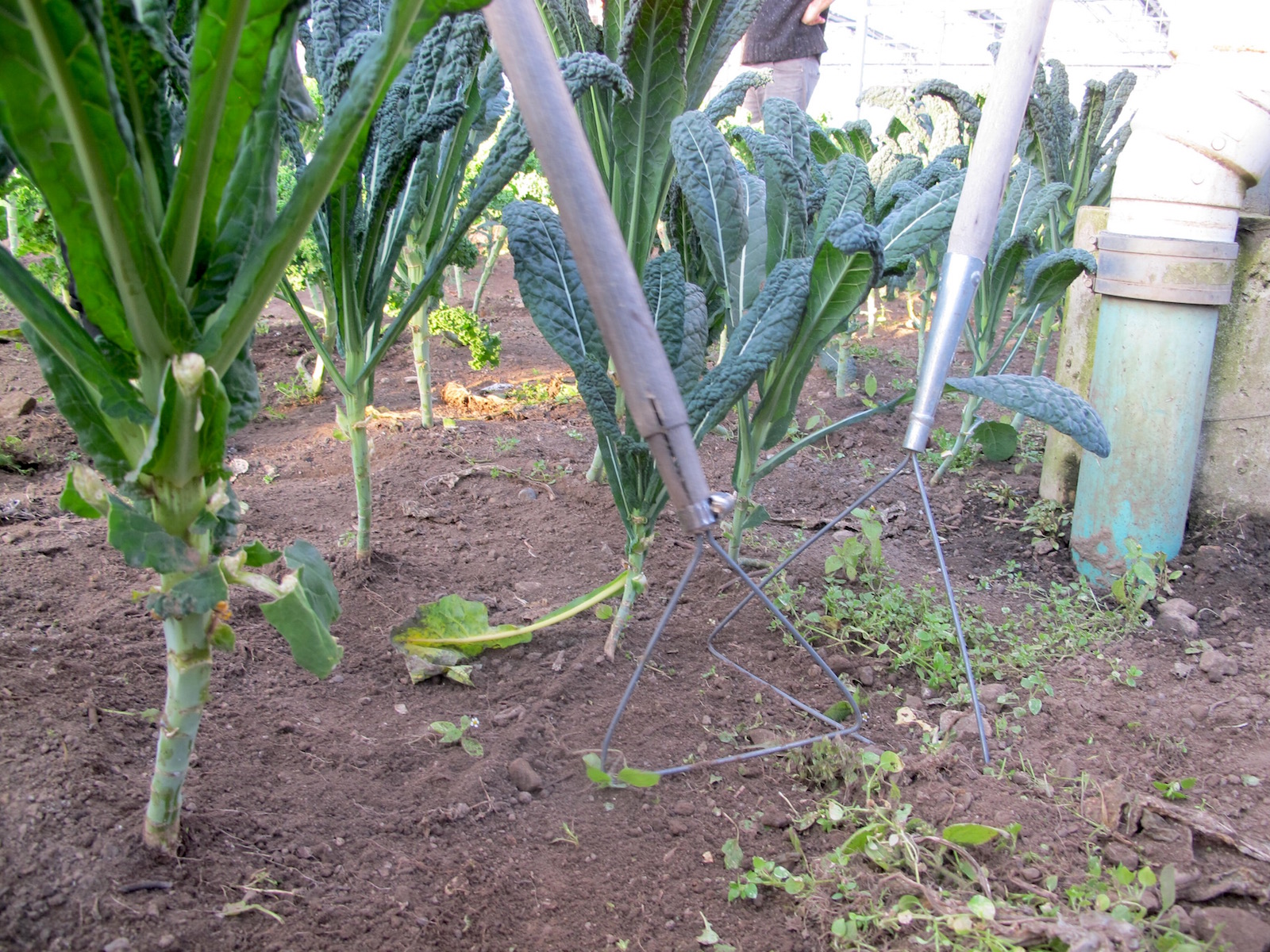 Wire Weeder
Taking the principles behind the popular Lucko Wire Weeder, the team added a handle to have a more ergonomic way of weeding in winter high tunnels and in between rows of tiny greens. An idea that started with farmer Michael Kilpatrick, Eliot Coleman and his engineering interns prototyped a number of different widths and shapes for testing on the farm. The above are DIY prototypes but Johnny’s sells a more sturdy model. 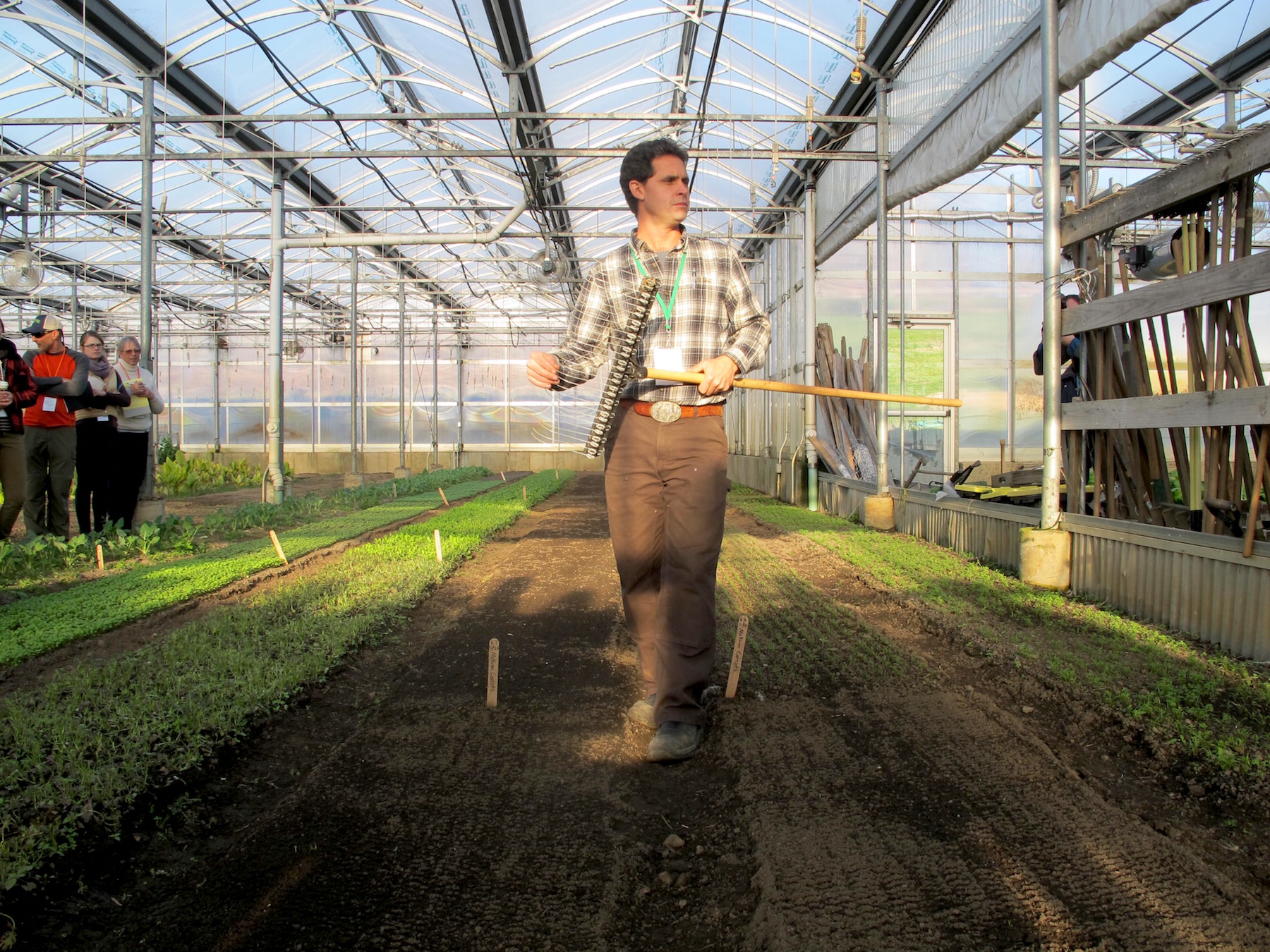 Tine Weeding Rake – Groundskeeper 2
A leaf raker that agitates the surface, right over the top of the bed and takes care of thread weeds and stops pythium blight for winter seeding.

The Tillie from Carts and Tools
An electric tiller that doubles as a raised bed former. Unlike a traditional tiller, the user walks it back and forth instead of pushing it from behind.

U-Bar Wheel Hoe with Leaf Lifter
An upgrade to the Planet Jr. Wheel Hoe, this wheel hoe has an offset handle and the leaf lifter guides all the foliage through the whole tool. It effectively weeds and cultivates. 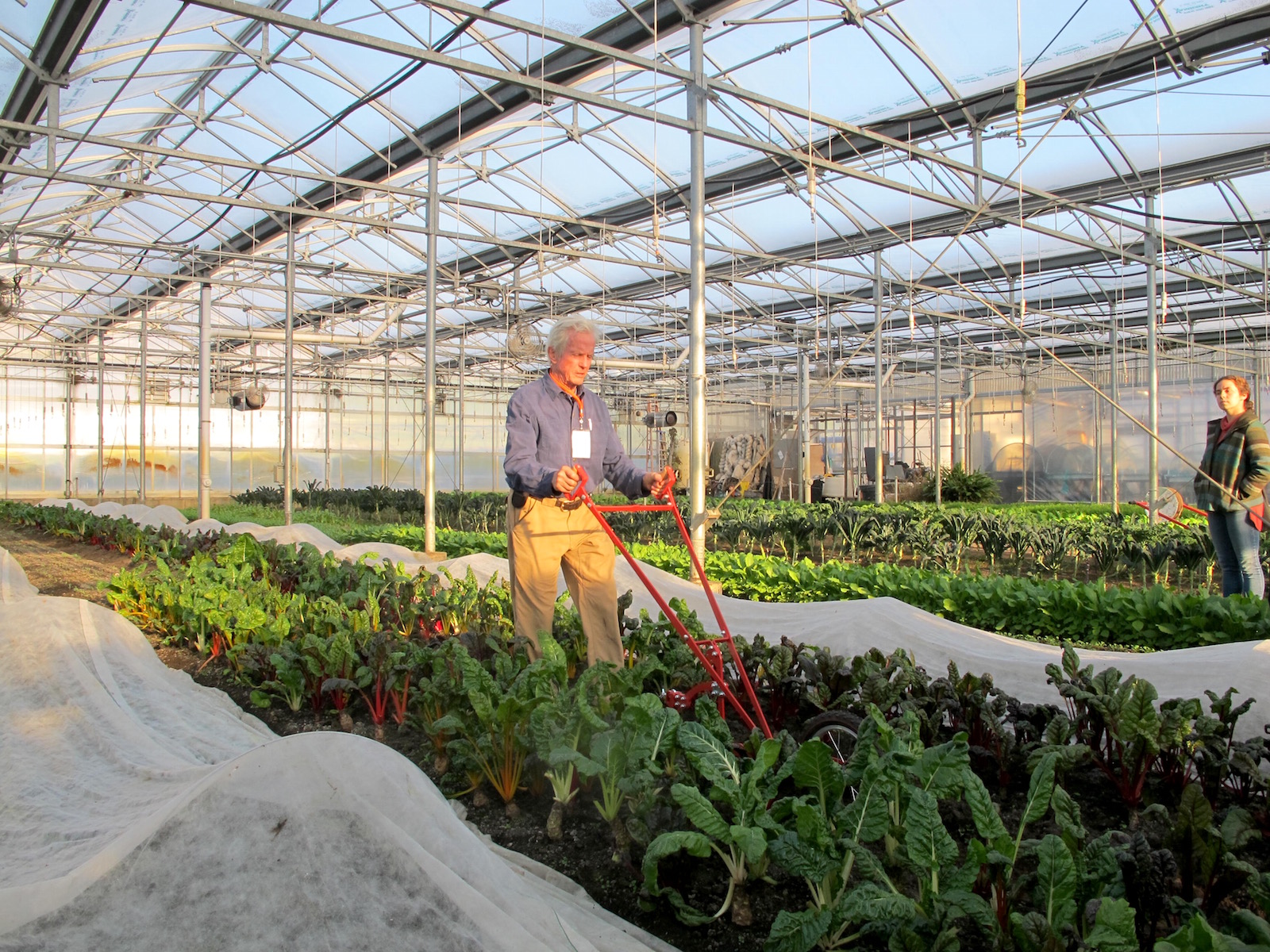 Eliot Coleman demonstrating the importance of designing so that “you’re pushing the tool, not pushing the wheel.”

Terrateck Double Wheel Hoe
Although this adapted colinear wheel hoe itself is not ideal (the handle is not offset, the clearance is limited), this French tool has a lot of interesting implements and features developed for it. In the demo, Lemieux called out the wingbolts and brackets used and the general system for adapting to different types of implements. Coleman also discussed the importance of designing so that “you’re pushing the tool, not pushing the wheel,” so that the line of force between the handlebar and the tool are aligned.

Terrateck Wheel Weeder
This wheel hoe comes in three sizes and disturbs soil with thread stage weeds while the blade cuts larger weeds below the surface. 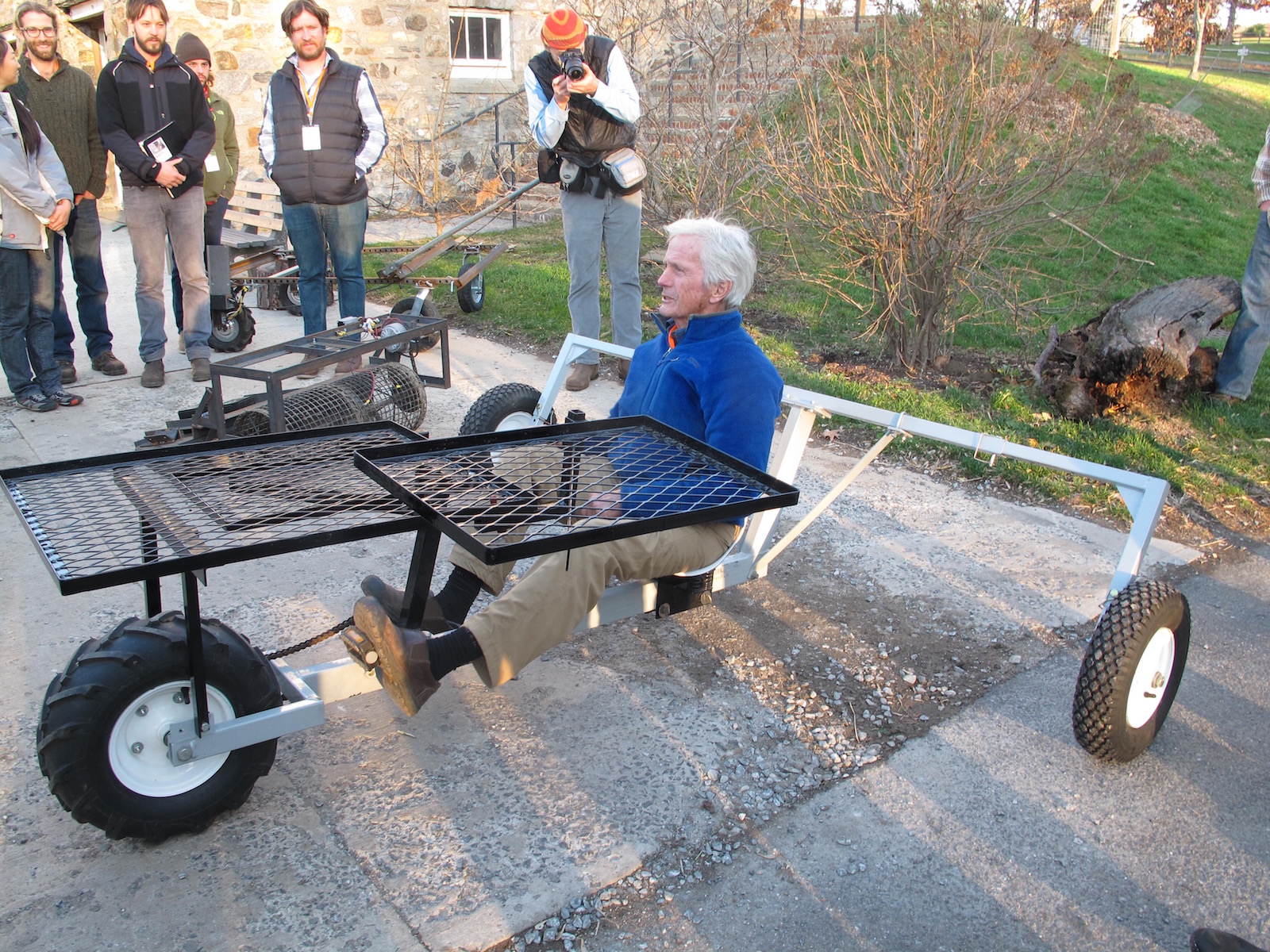 Seated Rolling Cart
Eliot Coleman demo’ed this pedal-powered seated cart from Europe, originally designed for harvesting asparagus. He uses it for picking, transplanting and weeding, an example of a more ergonomic way of working.

For more on the Slow Tools movement, join their Facebook page for updates and news or learn more about sustainable framing practices at the Virtual Grange!

How Smallhold’s Minifarm System for Mushrooms is Restructuring Distribution Chains