Denmark’s street sausage is the pølse (plural: pølser), an extra-long hot dog made of pork, allspice, and nutmeng and traditionally dyed bright red. Like NYC cart dogs, pølse are most likely to be eaten as a post-drinking snack. 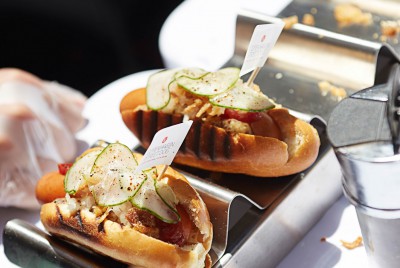 Brooklyn’s ambassadors of pølser are Martin and Sera Høedholt, husband and wife owners of Revolving Dansk —producers, marketers and online retailers of the Danish-style sausages. The duo have been making and smoking meat out of their Boerum Hill apartment since 2013. Earlier this month, they launched Copenhagen Street Dog, their first retail brand of pølser available for wholesale and online purchase in the U.S.

At this month’s Copenhagen Street Dog launch party in Manhattan’s Lower East Side we asked Martin and Sera to explain the main differences between the average NYC hot dog and the not-so-average pølse. 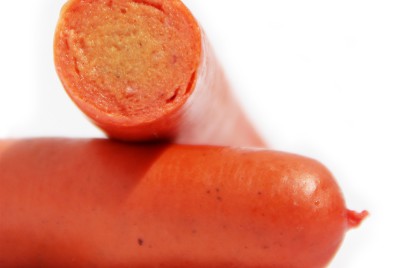 Ingredients. Pølser are made of 100% natural beachwood-smoked pork and are GMO- and gluten-free. They are seasoned with sweeter spices such as coriander, nutmeg and cardamom. Ingredients are held together in natural sheep casing, giving the pølse its distinct ‘snap.’

Appearance. Traditionally, pølser are dyed bright red with carmine, a natural colorant (brown sausages,  Grillpølse, are for grilling). Pølser are longer and skinnier than their American counterparts, sticking out one inch from either side of the bun.

Toppings. Ketchup only? No thanks. Pølser are topped with remoulade (a mayonnaise-based spread flavored with curry), mustard, fried onions and pickled cucumber.

Looking to try a pølse? Find them at Revolving Dansk’s events around New York or buy yourself an online snack.