The time has come. Are you ready to farm, harvest and cook mealworms in your own kitchen? Over the past few years, there’s been a lot of speculation around entomophagy and the feasibility of introducing insects into a Western diet. Maybe you’ve tried Exo cricket flour protein bars or munched on a fried cricket with us during New York Design Week. Or maybe you’ve discovered the bright flavors of ants at a fine dining restaurant in New York, Sao Paulo, Mexico City or Copenhagen. With the launch of Hive, the world’s first tabletop farm for edible insects, it’s time to fully embrace the sustainable protein of insects in your daily diet.

Katharina Unger and Julia Kaisinger are the designers behind Hive, the first commercial product from their company, LIVIN Farms. Over the past two years, their studio practice has prototyped everything from the award-winning Farm 432, a tabletop terrarium for fly larvae production and harvesting, to the Fungi Mutarium, a self-contained farm for growing edible fungus from toxic waste materials like plastic. To prepare for the launch of Hive, LIVIN Farms moved their studio to Hong Kong and have been working on the final stages of production. 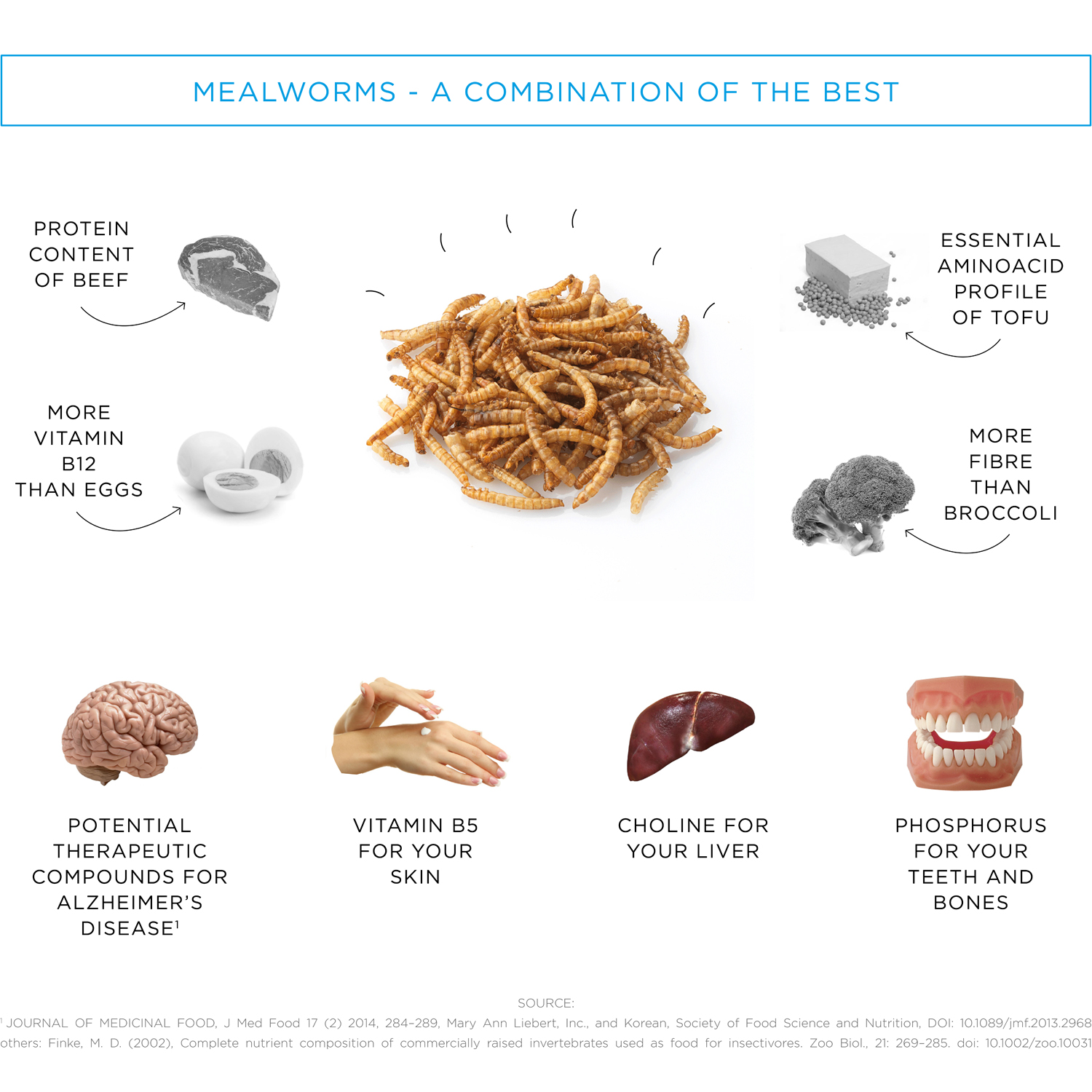 Although the Hive is almost ready, are eaters and home cooks ready? “Now is the moment where many peoples’ interest is awakened [around entomophagy] but the knowledge and supply chain for consumers is still very low and hard to access,” Unger explained. If the Hive Kickstarter campaign is any indication, consumers are not only ready but excited about the opportunity to explore the diversity of a new source of protein. The campaign hit its goal of $100K in their first month of fundraising and are hoping to reach the stretch goal of $125K before the campaign ends next week. “The Hive gives our backers the opportunity to experience the full process of growing edible insects, harvesting them fresh and finally cooking and processing them. They know exactly what they eat and how it has been raised—transparency that is very important in order to accept a novel food source.”

Below, Unger shares the design journey from concept to manufacturing and LIVIN Studios’ vision for a bug-filled future, on the plate. And there’s still time to be part of the next food revolution and Kickstart the world’s first tabletop farm for edible insects.

MOLD: Two years ago you debuted Farm 432, a project that breeds and harvests fly larvae. What were some of the learnings you took from that project when designing the Hive?

Katharina Unger: There are many similarities that can be applied to soldier fly larvae as well as to mealworms. The work with Farm432 certainly helped to gain a better understanding of how to design for insects and which parameters to be careful about. 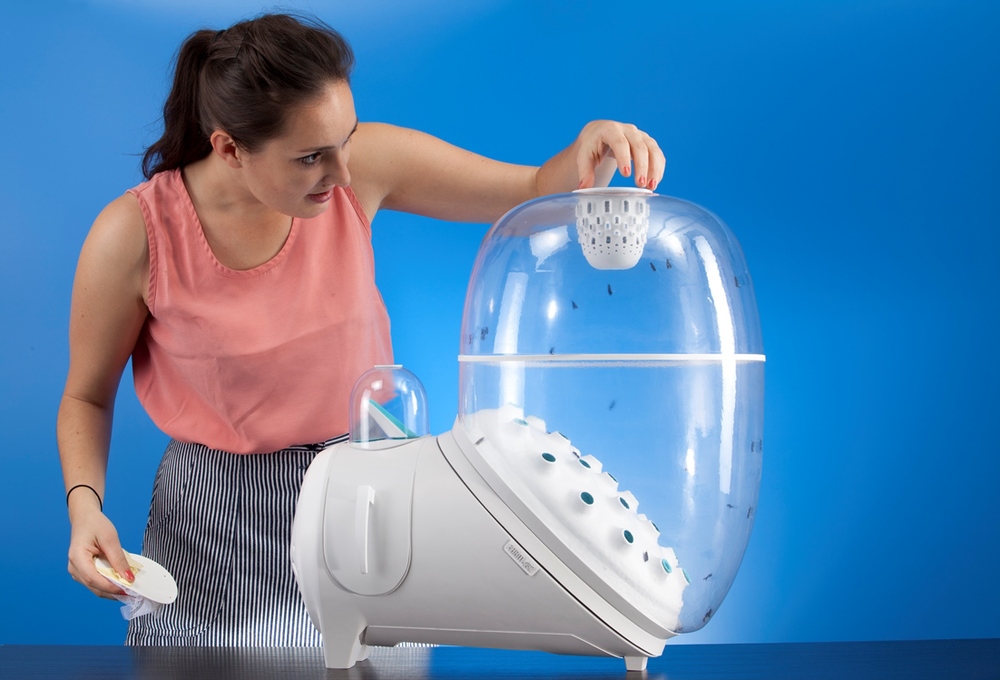 From a more technical design standpoint, Farm432 is a very compact product but at the same time has a lot of complexity in its design. It is an inspirational design but would have been quite expensive to manufacture. Farm432 Beta (you can see it when you scroll down and see the About section on our Kickstarter project page) we manufactured in China in a small series. This has taught me a lot about the manufacturing process and the constraints of larger scale production.
The Hive, as a next step, should become a product more humble in its appearance so that it can fit into anybody´s home, economical to manufacture and functional to use.

Why did you decide to focus on mealworm production for your first commercial product?

Mealworms have a slightly nutty but overall relatively neutral taste. This makes them great to pair with all sorts of recipes, both savory and sweet. They are an ideal “beginner bug” for first-time insect eaters. They can also be eaten as a whole. They have already gained some traction as an edible insect in the West, in both America and Europe.

For home production, mealworms are very well suited. They don´t make any sounds, can be grown on small spaces and their feedstock can easily be sourced from the kitchen: grains like oats and moist foods such as carrots or other veggies.

What were some of the main conditions you were designing for for the Hive? How did you finally solve for those conditions?

We dealt with 3 major challenges in the design process: 1. Designing a system to harvest a reasonable amount of mealworms of similar size in regular time frames 2. Receiving a clean harvest 3. Creating an overall positive user interaction 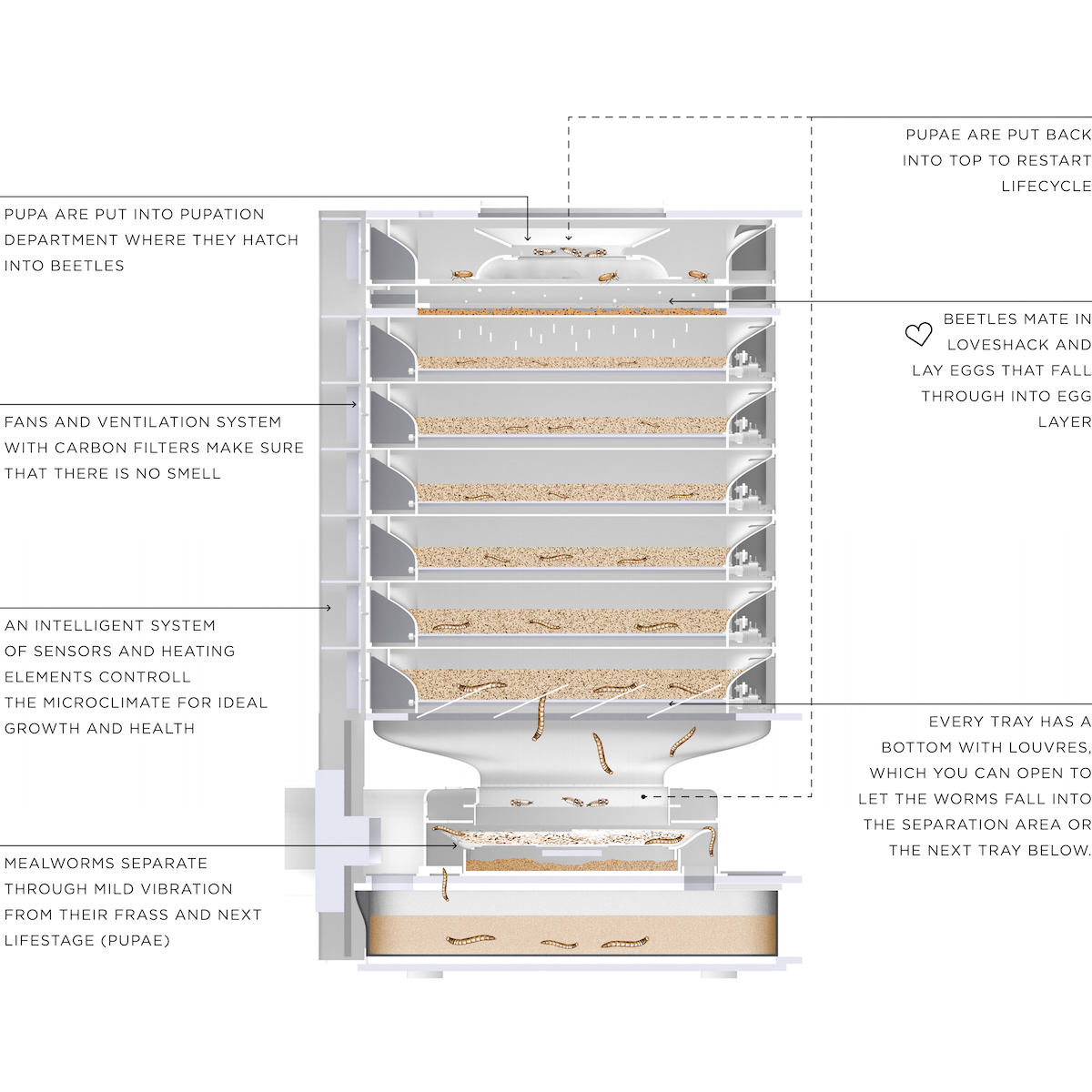 When designing a system to harvest food through regular time frames, the separation of life stages was important in the design. We designed the drawer system in order to keep a weekly system of re-populating a new drawer while harvesting another one. The purpose of this is that you can harvest a group of mealworms of similar, big size, while giving the smaller ones some more time to eat and grow. 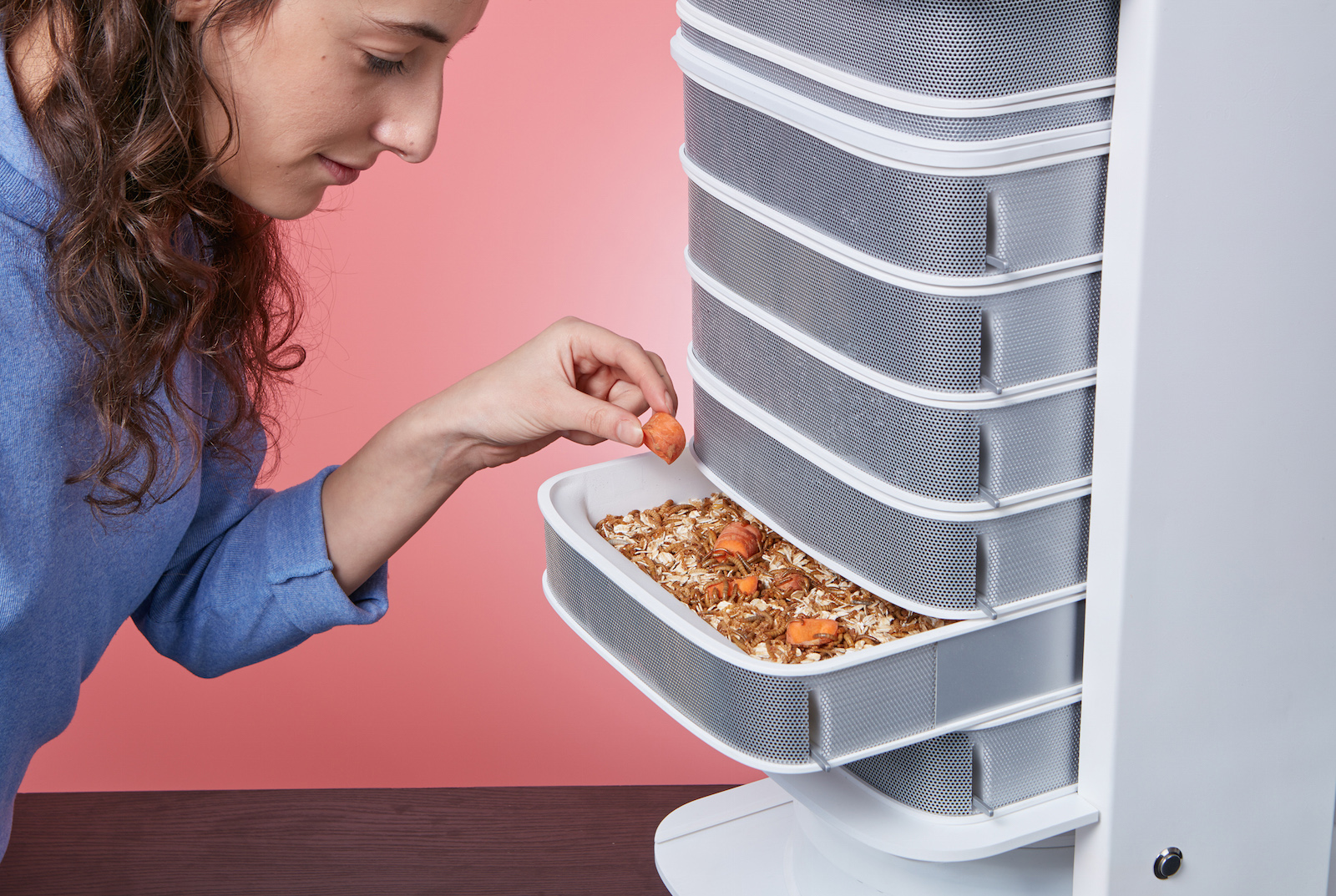 For the issue of a clean harvest, mealworms typically live in their food source (for example oats). Currently, one of the most laborious jobs in mealworm farming is to sieve or otherwise sort them out from their food scraps when harvesting. We wanted to avoid this and therefore designed a system of vibrational sieves in combination with curved ramps: The fit mealworms will crawl off into the harvest area while the food scraps or occasional dead ones stay behind. Also, the fine powdery manure is in this way sieved out automatically and can be used as a fertilizer for plants. 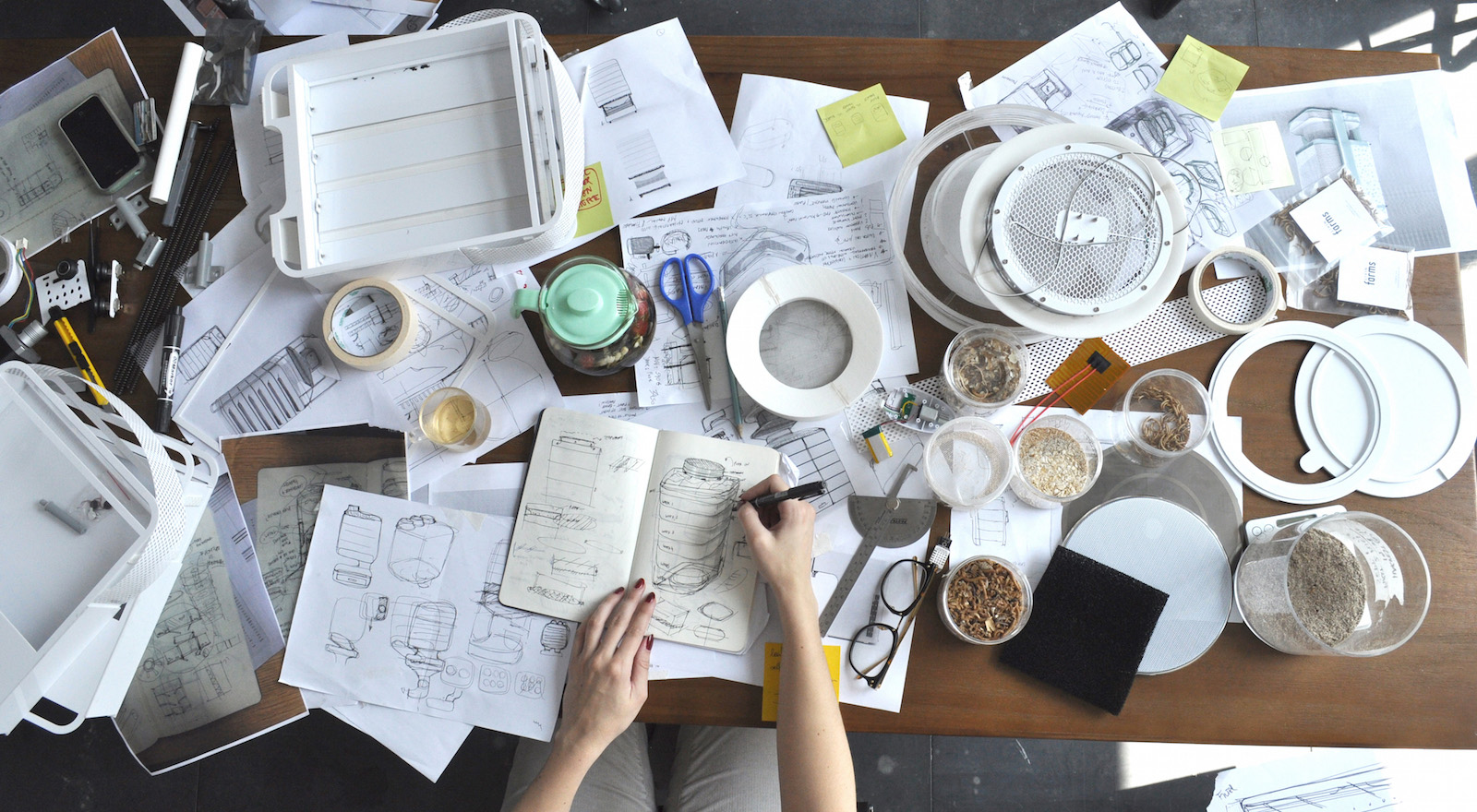 Finally, for the user interaction, creating a farm with live animals, especially insects, that has to fit into a household is quite a challenge. We wanted the Hive to still have an educational value in that you can look inside and observe. However, in its closed status the worms are not visible which turns it into a unobtrusive object.

This is your first product designed for manufacture—what were some of your challenges?

Design for manufacturing is hard work. It is a very narrow road between a beautiful and easy to use device and making it economic and efficient in how it will be manufactured. This is why we have given ourselves quite a lot of time to finalize the product in 2016 before we deliver it to our backers. One of the main challenges is the structural design and composition of the drawers, the side pillars and the integration of the electronics. There are currently many parts that we are aiming to reduce in the next months.