Four Prototypes for the Future of Cooking from IKEA and IDEO

It was hard to miss the green and white striped billboards and subway ads dotted around Milan for #IKEATemporary, IKEA’s mega pop-up near Zona Tortona. With over 200 products for sale; METOD kitchen vignettes by Matali Crasset, Paola Navone and Studio Irvine; a fully operational cafeteria serving up those famous Swedish meatballs—including their new “sustainable” veggie meatballs; and a preview of Ilse Crawford’s new capsule collection, SINNERLING; the friendly 1,400 square meter space will continue to be a hub of activity throughout the run of the Milan Expo.

Swedish meatballs aside, a wonderful prototype of the future of home cooking is worth the trip to IKEA Temporary. The result of a 2013 collaboration between IKEA, IDEO and the students of the School of Industrial Design at the Ingvar Kamprad Design Centre at Lund University, and the Industrial Design department at Eindhoven University of Technology, the presentation shares learnings gleaned from the work of 54 students across 27 projects and four internships with a built Concept Kitchen for 2025.

The prototype touched on four main themes: storage, waste, water and cooking. Although nothing presented was completely revolutionary, the overall vision felt like a cohesive imagining of the near future where daily drone delivery of groceries, grey water management and municipal fees for disposal of waste are the norm. 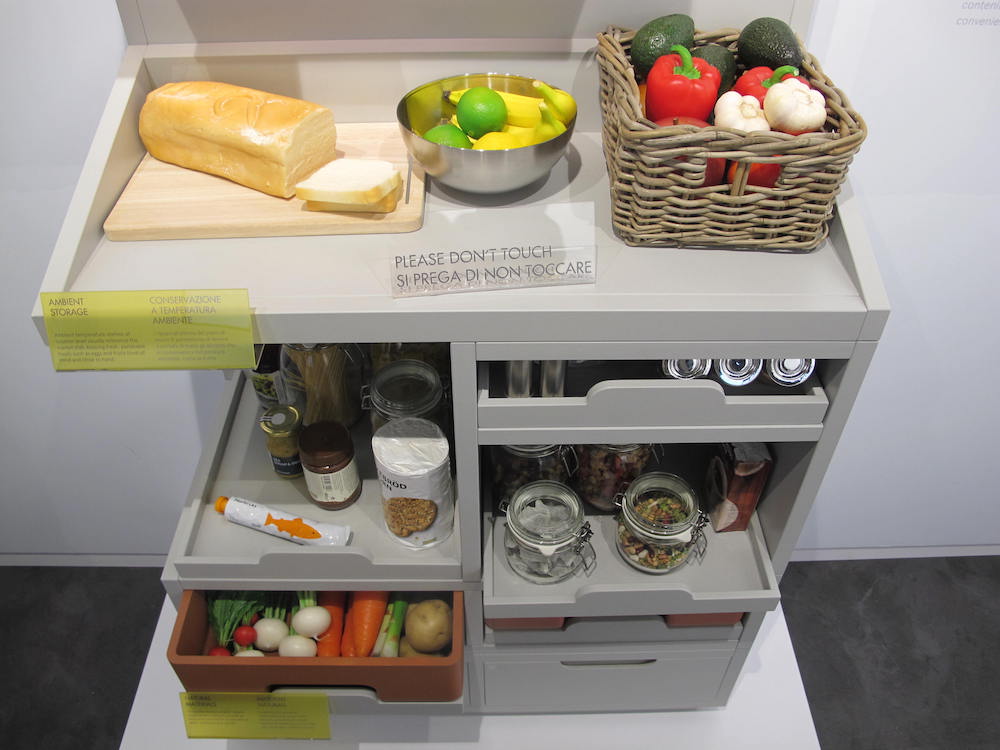 A NOD TO THE PAST IN FUTURE FOOD STORAGE

Returning to the fresh market driven approach to buying food, energy inefficient refrigerators will be a thing of the past. Instead, a cross-functional system of inductive cooling containers and smart packaging with RFID stickers will keep foods at the right temperature, staying fresher for longer.

Double-walled glass cloches keep food visible, so we don’t overbuy. Insets made of porcelain, wood or slate keep food fresher for longer, and can be detached to use as tableware. The magnetic, stainless steel-gadoliminium alloy base is inductively cooled by the shelves.

Additionally, a return to breathable, cooling terracotta containers is an energy neutral way of storing vegetables like garlic, potatoes and onions. 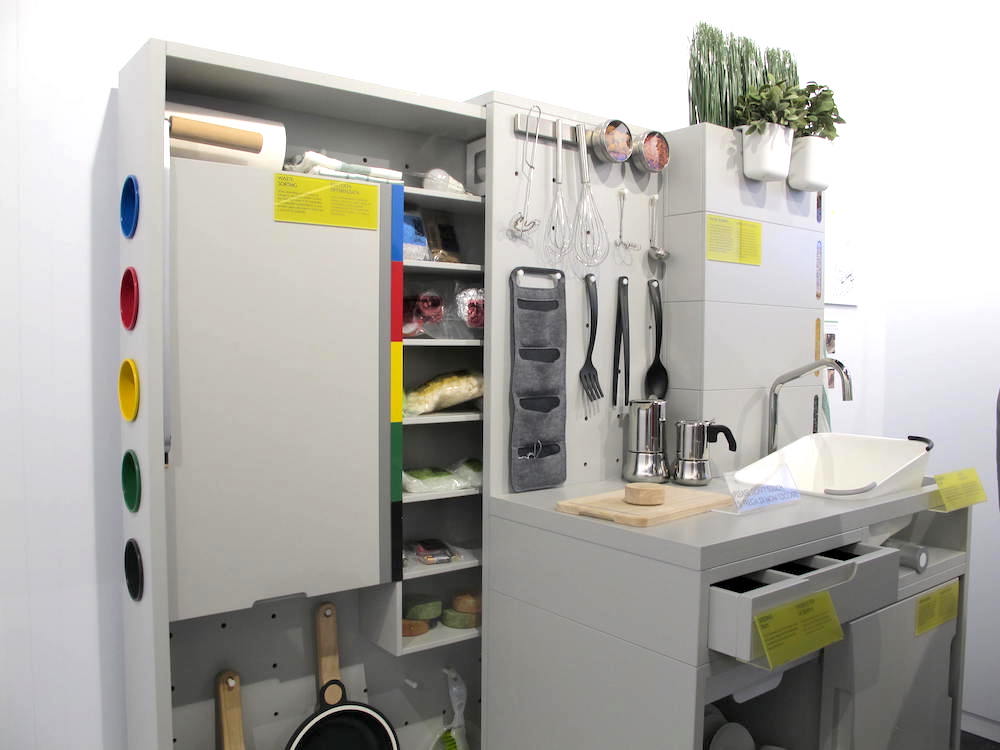 Waste is sorted by color through an integrated recycling/storage cabinet.

WASTE NOT WANT NOT

An integrated recycling system is the main component of IKEA’s future waste management approach. Separating non-organic waste by material, the smart system identifies types of waste, vacuum packs and seals it and then prints a record of our waste production along with possible potential future uses.

In addition, in-home composting becomes the norm with a souped-up garbage disposal system that processes organic waste from the sink, extracts water and produces a compressed puck of compostable material that could be picked up with other waste or used for gardening. The nutrient-rich waste water is piped into the system for watering indoor plants. 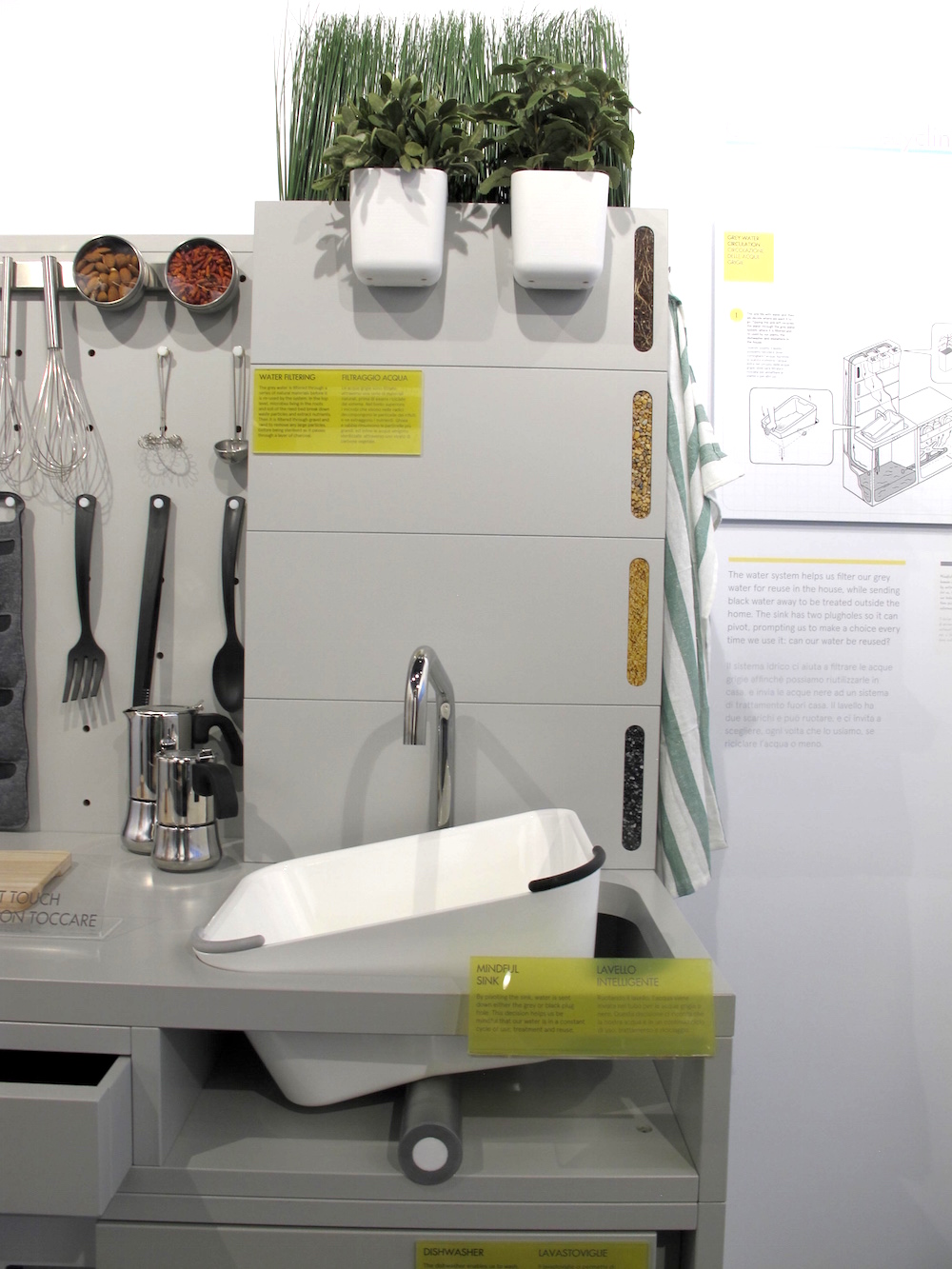 With California’s water shortage on the West Coast giving us an unwanted look at future, the design of sinks are becoming a critical avenue for reshaping water usage. A “mindful design” solution from IKEA proposes a pivoting basin that has two plug holes—one for gray water that can be reused for washing up and watering plants and one for black water that would be flushed to the sewage system. 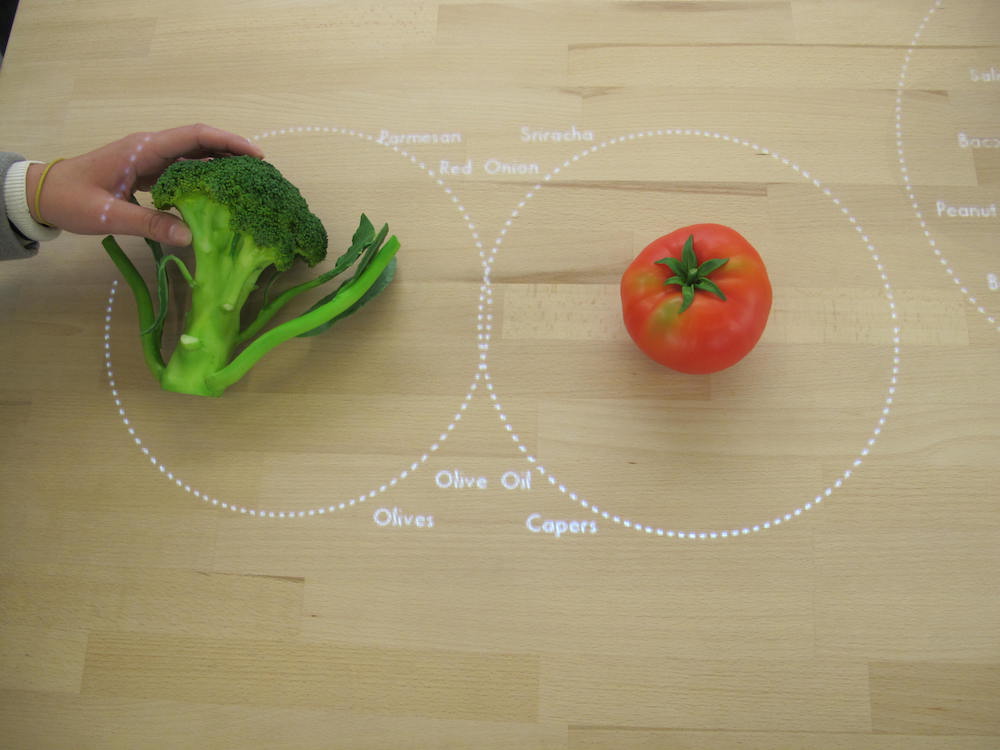 What looks like a typical IKEA kitchen table is actually a multifunctional food hub for preparing, cooking and eating meals.

The technology consists of a camera and projector positioned above the table and induction coils underneath the table surface. Networked together, they allow the system to recognize objects and their movement and to project a display.

The table becomes a surface for interacting and learning about ingredients. Specially designed cookware activates induction coils to create a cooking surface.

Concept Kitchen 2025: A Table for Living from IDEO on Vimeo.

IKEA’s concept kitchen was one of the most thoughtful projects we saw during Milan design week. A glimpse at design-driven technology offers a more humanistic view of future objects that both serve a purpose and offer solutions.