In the below excerpt from Super Cells: Building With Biology, Nina Tandon and Mitchell Joachim confront the thorny questions surrounding how new advances in biomedical engineering might revolutionize the way we produce meat.

Andras Forgacs, an entrepreneur turned rancher, arrived in agriculture by way of medicine.

In 2007, he and his father Gabor Forgacs founded Organovo, a San Diego company using 3-D bioprinting to engineer human tissues for pharmaceutical research and medical applications. Forgacs admits that, back then, people often thought they were “a little crazy.” But as their lab and others like it made progress printing simple human body parts, they started getting questions like, “If you can grow human body parts, can you also grow animal products like meat and leather?” This time they were the ones to find the idea a little crazy. But after some consideration, they began to think that what was craziest of all were our current methods of producing these goods.

The environmental costs of maintaining the herds that provide the world’s meat and other decidedly un-vegan things are staggering. By 2050, when the UN predicts the population will reach approximately 10 billion people, Forgacs predicts that it will take 100 billion animals to satisfy the world’s demand for meat, dairy, eggs, and leather goods. Meeting that demand will require some seriously huge supplies of grain; presently more than 35 percent of the world’s grain crop is fed to livestock. And given that economic development tends to lead to increased meat consumption, a growing, globalizing population will likely have a bigger hunger for meat.

“Maintaining this herd will take a huge, potentially unsustainable toll on the planet,” Forgacs says.

There are also food security risks and public health risks from the high concentrations of animals found in modern agriculture, which create breeding grounds for disease and increasing vulnerability to livestock-targeted bioterrorism. Outbreaks such as swine flu, foot-and-mouth disease, salmonella, and BSE (mad cow disease) are particularly prevalent where animals and people exist in close concentration.

Forgacs wondered if he could find a better way—especially considering that “essentially, animal products are just collections of tissues, and right now we breed and raise highly complex animals only to create products that are made of relatively simple tissues.” What if, instead of starting with a complex and sentient animal, we started with what the tissues are made of, the basic unit of life, the cell? This was just what Forgacs and his father had done with Organovo. They could use the same techniques of biofabrication, guiding cells to replicate themselves to grow tissues and organs, in order to instead grow biomaterials that could form the basis of a humane, sustainable, and scalable new industry.

The idea of culturing animal products is not new—humans have been harnessing the power of cells for making wine, beer, and yogurt for millennia. In fact, Winston Churchill wrote about the practice in his essay “Fifty Years Hence” published in Strand magazine in 1931, where he predicted a future of cultured meat, saying, “We shall escape the absurdity of growing a whole chicken in order to eat the breast or wing, by growing these parts separately under a suitable medium.”

Churchill’s prediction was in a sense on target, but it wasn’t until 60 years hence that experimenters began culturing meat in earnest. The FDA first approved NASA’s production techniques for in vitro meats in 1995, and NASA researchers subsequently began experimenting with cultured meat as long-duration food for astronauts on space missions. The first edible sample NASA engineers produced were “fish fillets” made from goldfish cells in 2002, in collaboration with the Touro Applied Bio Science Research Consortium.

Forgacs founded his cultured meat and leather company, Modern Meadow, in fall 2011 in Columbia, Missouri. Not surprisingly, the team’s methods for growing animal products from cells closely parallel those used for growing replacement organs and tissues. They begin with animal cells, multiply (i.e., “expand”) them in the lab, form them into tissues, and mature them in bioreactors into muscle and skin, the main ingredients of meat and leather. 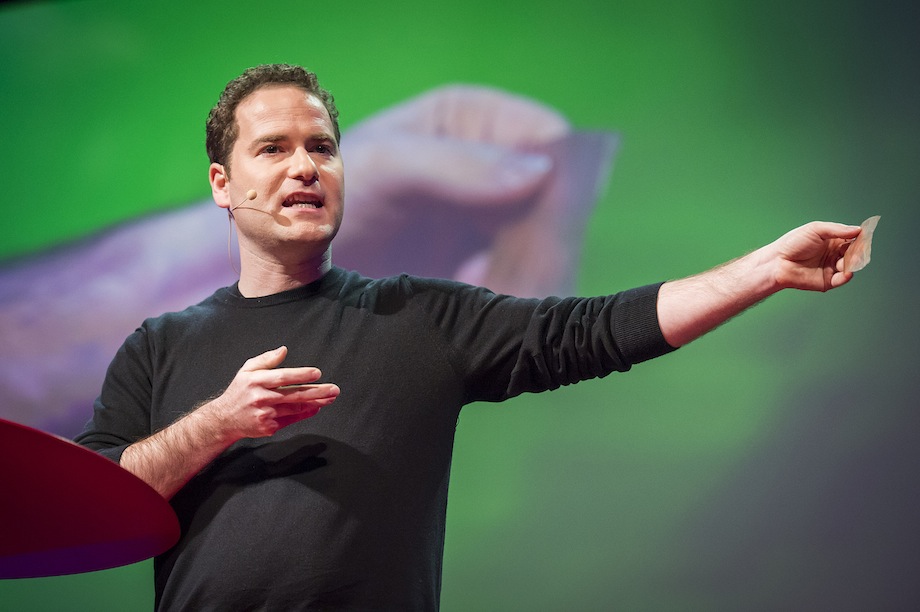 Andras Forgacs, delivering a TED Talk, displays a piece of leather he grew in the lab. Image: James Duncan Davidson/TED

How big a steak might they serve? For now, they’re expanding cells in cell culture roller bottles, traditionally used for high-quality, reproducible antibody production for laboratory reagents and antibody-based therapies and vaccines. These have limited yields, fitting around 100 million cells each (enough for an inch-size patch of meat about a millimeter thick). Looking ahead, they envision scaling up further to use cell culture bioreactors for high yield at scale, first to billions of cells, producing enough meat or leather for kilogram quantities of product, and ultimately, they expect, in the thousands of kilograms.

Once they’ve grown the cells, the researchers harvest them and assemble them into tissues. For leather, they spread out the cells and their collagen to form thin sheets, layering the sheets on top of each other like phyllo pastry. The process for assembling a meat product is a bit more complex. For starters, Forgacs’ current meat model is composed of four distinct cell populations: muscle, fat, endothelial (lining the blood vessels), and fibroblast (the main cell type in skin, which forms the basis of their leather product). The expansion of each cell type needs to be optimized individually, as each one multiplies at a different rate and under slightly different ideal conditions. In addition, proper meat, unlike leather, must be marbleized rather than layered. Finally, there’s an additional downstream bioreactor conditioning (like laboratory cellular “exercise”) needed for meat, lest it come out as limp muscle with a lackluster mouth-feel.

Forgacs first tasted meat grown in Modern Meadow’s lab around Thanksgiving 2012. As he describes it, the whole day was quite ceremonial. He bought a little pan, olive oil, salt, and pepper—kitchen essentials not typically stocked in a lab. Then he donned a costume: a white lab coat. He remembers “a little sausage the size of a pinky,” which the team cooked up on a hotplate in the lab. In an effort to be scientific, he did a first tasting unsalted, and a second with salt and pepper. “Flavor-wise, it was very mild, and it didn’t taste bad at all,” he recalls. “We just wanted to demonstrate that it was edible.”

Ultimately, Forgacs aims higher than “edible,” of course. He says his team is collaborating with chefs and making tasty progress.

Will it ever be economically viable to culture meat at scale? There are numerous small obstacles, Forgacs says, but “we’re systematically knocking them down.”

Tandon and Joachim contend that we’re entering a new technological revolution, one in which we can create smarter technologies by making cells our partners in design. And they confront the thorny questions that come with playing with the power of life. Imagine the possibilities: broken bridges that have the ability to self-heal, one-stop body-shops for human body parts that render organ donation obsolete, living looms spinning high-tech fabrics, PETA-friendly porterhouse steaks—smarter, more adaptive technologies that may form our future arsenal as we confront looming challenges.

For more about how advances in biomedical engineering are reshaping our built world, download Super Cells: Building with Biology from TED Books.