Today, the most sustainable systems for food production are farms that sequester carbon emissions and restore the surrounding ecosystems. These “zero input farms” require no fertilizers or antibiotics—they don’t even require fresh water. Most importantly, the future of these farms are being designed to scale up while avoiding the pitfalls of industrial agricultural. But here’s the catch—these farms are not on land but in our oceans.

GreenWave, the award-winning organization building 3D ocean farms along the Atlantic Coast of the United States, is working to empower a new generation of farmers to see the vast blueness of the seas as fertile ground for feeding people. “New forms of ocean farming open up the unprecedented opportunity in the US to build a ocean-based ag system from the bottom up,” Emily Stengel of GreenWave tells MOLD.

With over 10,000 edible plants and shellfish that can be farmed in our seas, GreenWave’s proposal for independently owned and operated ocean farms take lessons from land-based sustainable agricultural practices and emphasize crop diversity, rotation and a direct market from farm to market. The 3D farms are designed to use the entire water column to grow large amounts of food, fertilizer, feed and sustainable biofuel.

Bren Smith, the Executive Director and CEO of GreenWave, pioneered the framework for 3D Ocean Farming. A lifelong commercial fisherman, Smith worked in a wide range of ocean jobs from longlining for McDonald’s on the Bering Sea and “sliming” in the canneries of Bristol Bay, Alaska to lobstering in Lynn, Massachusetts and aquaculture farming in Newfoundland, Canada. On a search for a more sustainable practice that would allow him to “spend my life at sea…I want to die on my boat,” he told a Tedx audience, Smith became an oysterman, farming shellfish on the ocean floor. Storms, ocean acidification and warming waters wiped out his farm and Smith began searching for an answer. Taking seaweed research from Dr. Charles Yarish, Smith became the first American 3D ocean farmer. 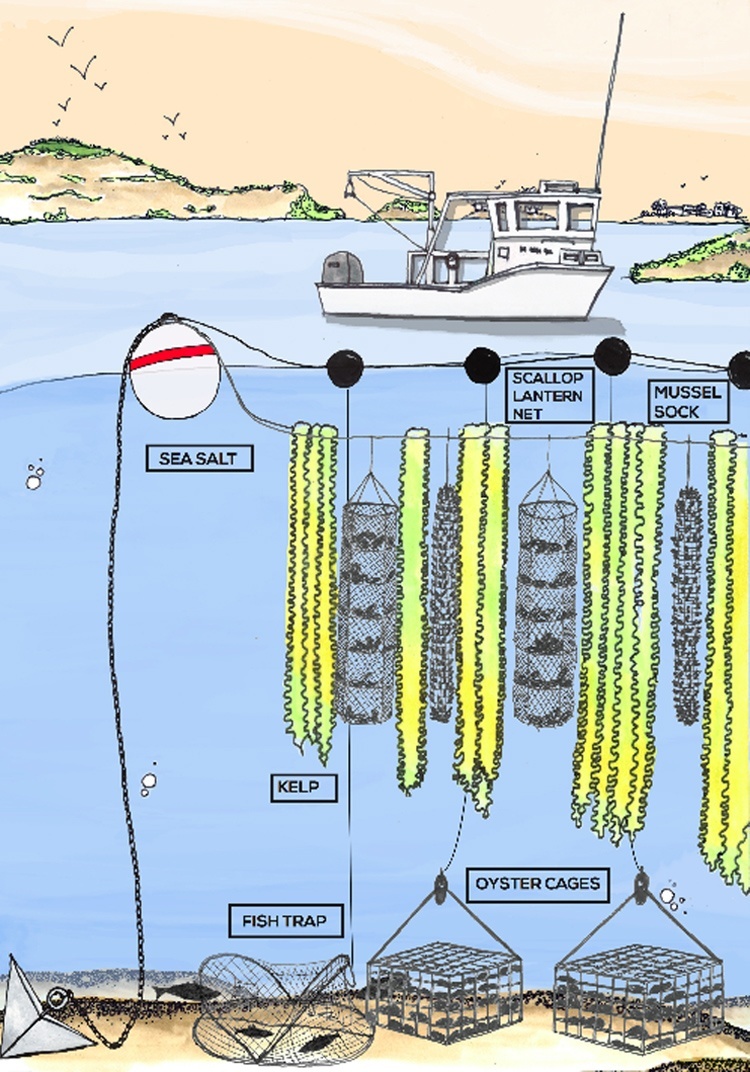 The farm system is relatively simple. The farm is anchored to the sea floor and buoys mark the surface with floating lines. Seaweed grows down and shellfish (like mussels and scallops) are also cultivated in these columns. Bivalves like clams and oysters are grown in cages directly below the columns closer to the sea floor. The system has a small footprint, about 20 acres, and a focus on crop diversity using ecosystem analysis allows ocean farmers to develop crops that local communities support.

Besides producing food, fertilizer, feed and fuel, ocean farms are positioned to restore the waters. Kelp is the second fastest growing plant and it soaks up 5x more carbon than land-based plants and oysters can filter 50 gallons of water a day. Smith sees ocean farms as “climate farmers” and argues that ocean farming is the most sustainable form of food production on the planet.

[Read more about This Moment in Seaweed]

GreenWave envisions a future where, “each stage of production and processing ensure benefits circulate back into communities and farm families,” Smith tells MOLD. And design plays a critical role in realizing the potential of these 3D ocean farms. As the production increases, sea farmers need designers to help in the field of culinary innovation—creating compelling products, packaging and shifting consumer tastes by “redesigning the seafood plate with the focus being on sea vegetables and wild fish being pushed to the edges of the plate.”

This summer, GreenWave will be launching a seaweed-forward food truck in New York City and a micro-seafood hub in Fair Haven, Connecticut. The hub will be a prototype to “aggregate, process and market ocean farm products for retail and wholesale venues both regionally and nationally,” and serve as a community space for job training and apprenticeship.