When two women dressed in matching workwear approach and tell you to, “eat shit,” it gets your attention. Armed with caulking guns and a giant plastic backpack in the shape of a perfect poo—think turd emoji, only bigger—these angels of good will serve up a crostini topped with a swirl of chocolate ganache to unsuspecting visitors. The stunt, happening in the Ventura Lambrate design district, is in support of Eat Shit—this year’s Design Academy Eindhoven exhibition of student work. 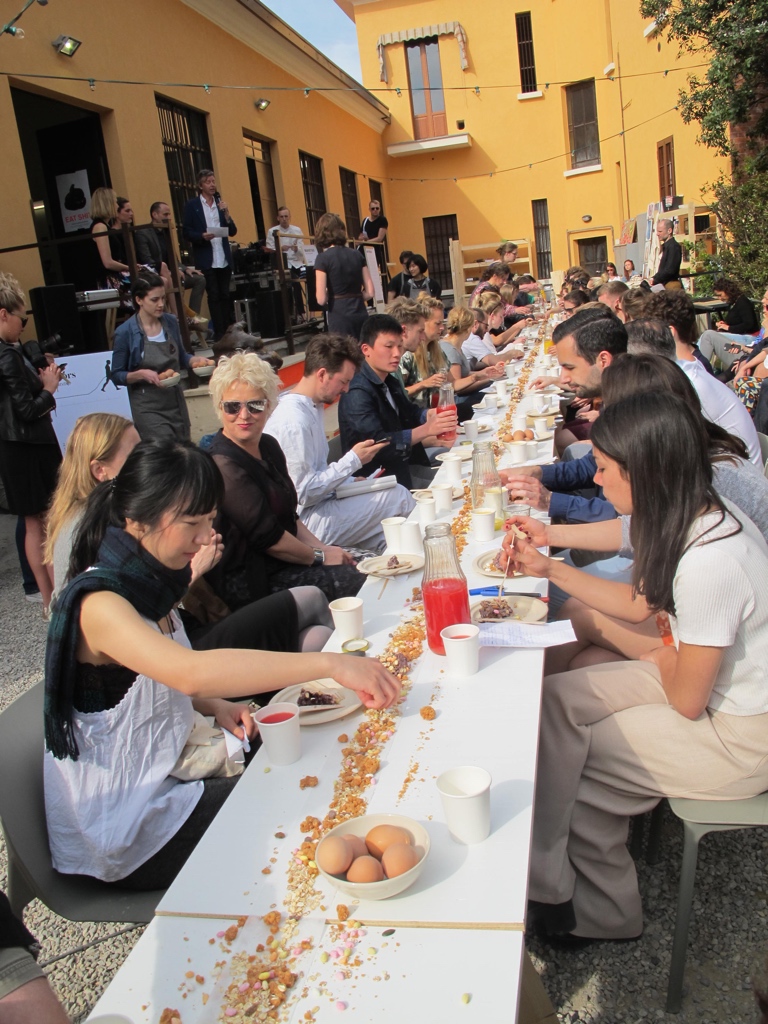 Curated by Marije Vogelzang, head of the Food Non Food department, the exhibition is drawn together by a timeline of over 400 food-related projects from the DAE archive (1976-2014) that occupies the walls of the two rooms of the exhibition. The work on display is as varied as Olivier van Herpt’s 3D ceramics printed to Tomm Velthuis’ set of wood blocks to teach children about factory farming. 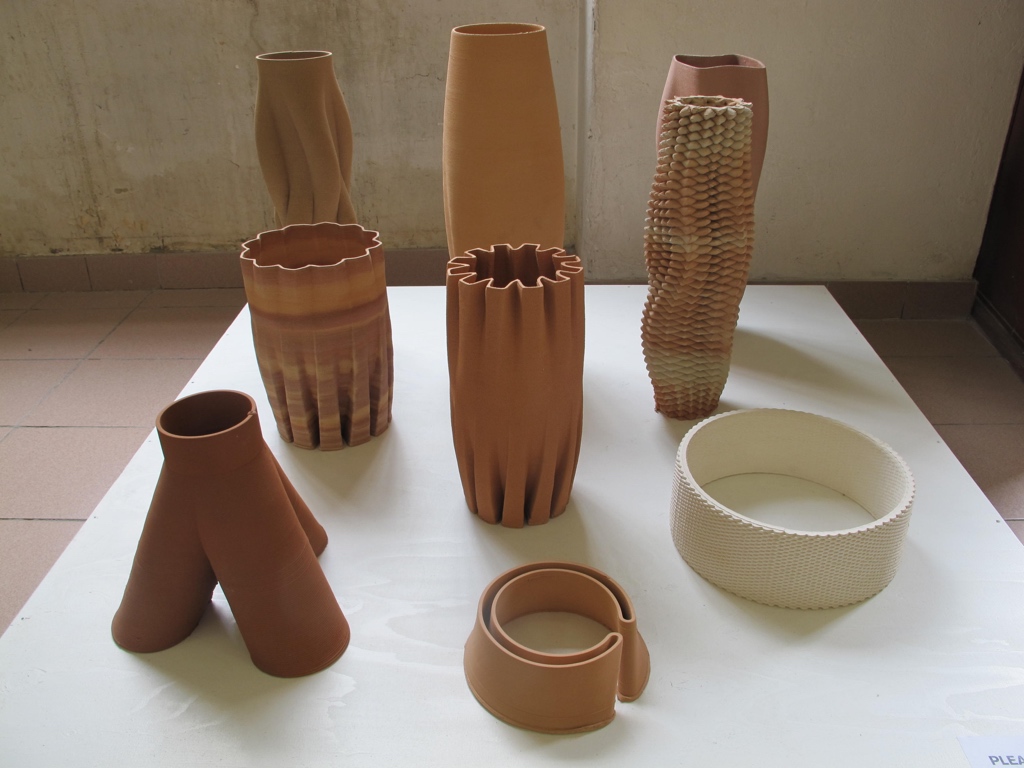 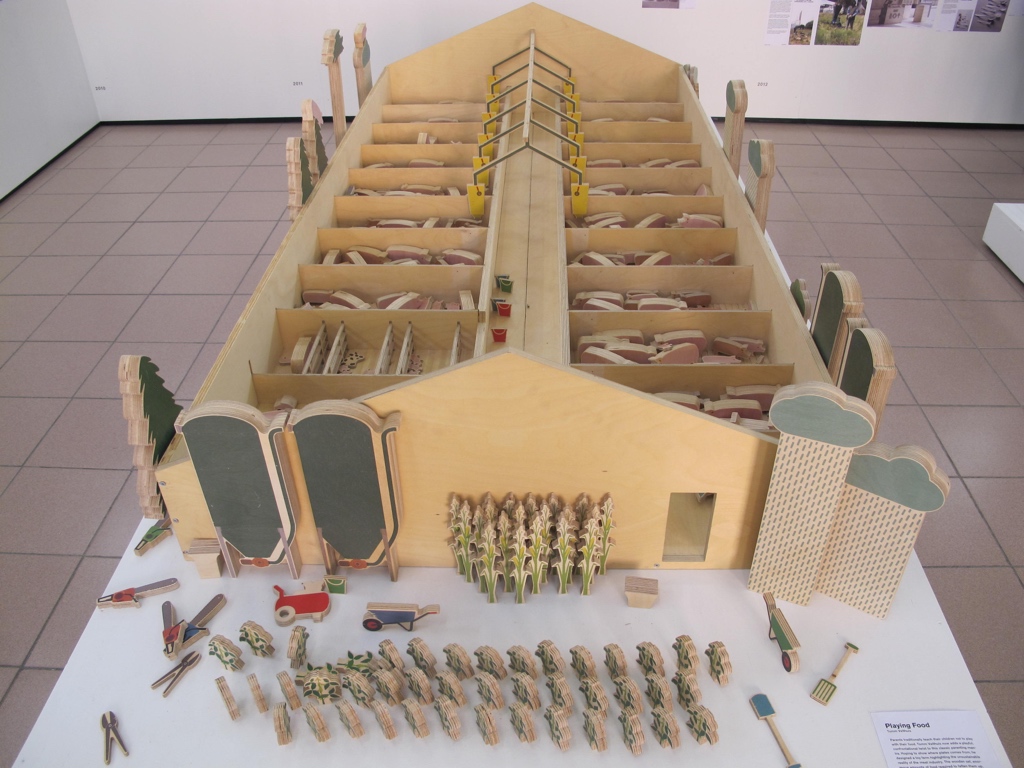 Dealing with the subject at hand, Pim van Baarsen’s “Holy Crap” is a system for recycling waste in Kathmandu, Nepal. van Baarsen displayed a prototype for an app that could engage citizens in responsibly disposing of waste and a branded tricycle that would transport recyclable waste. 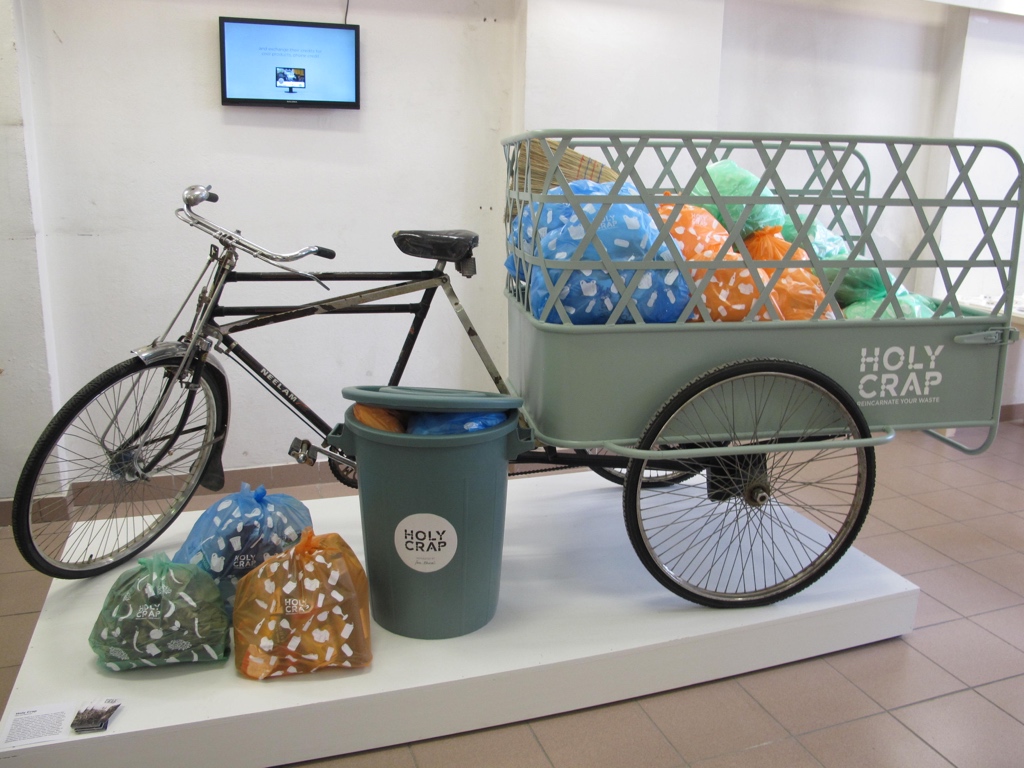 Speaking of waste, Arne Hendriks’ Pigeon Poo Tower was recreated on site. Hand shredding newspapers to create paper bricks, Hendriks proposes to redefine our relationship with the humble pigeon by building a tower to house the birds, collecting their valuable poop for natural fertilizer. 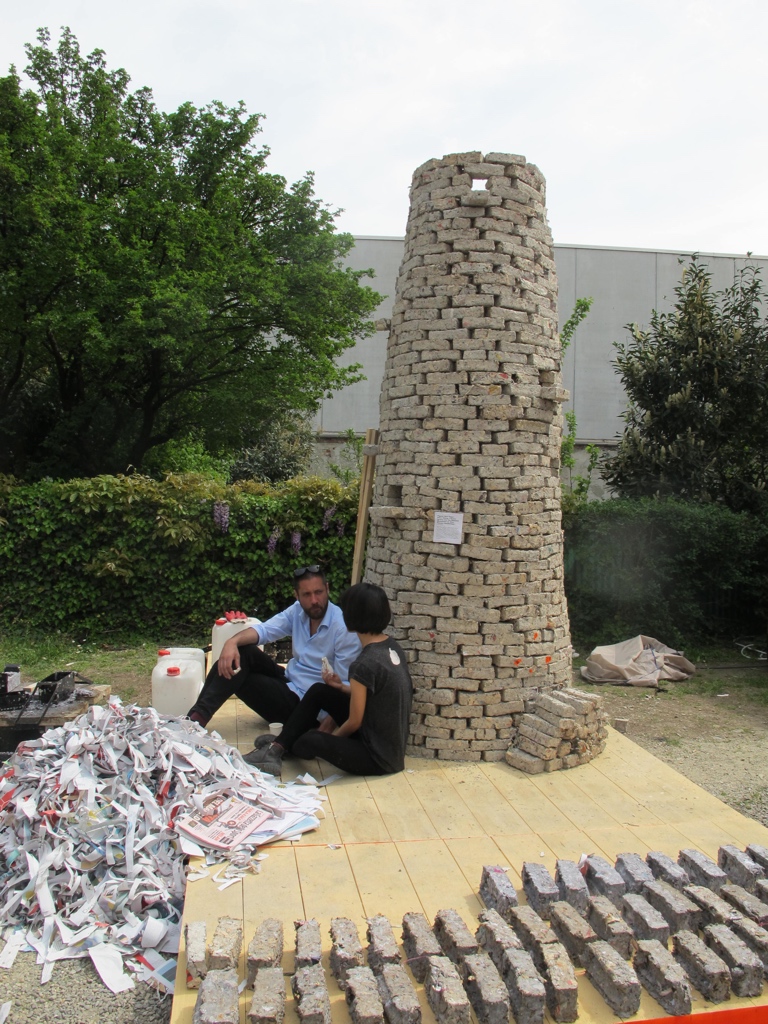 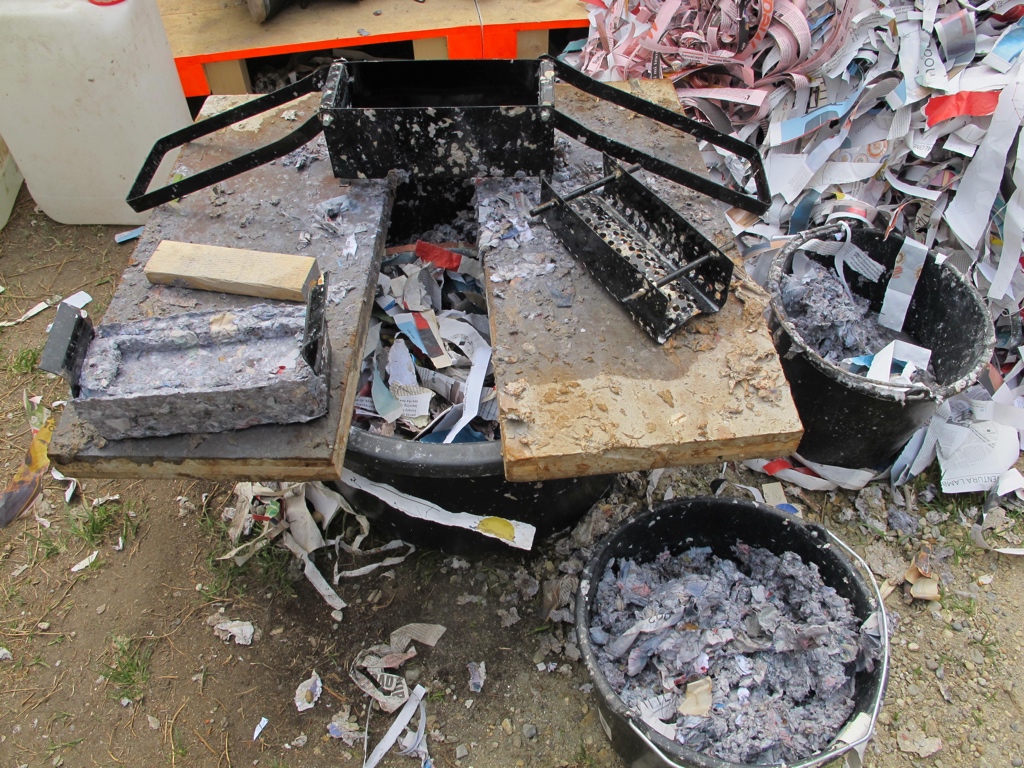 Work on food and food production was also on display—Femke Mosch served a banana bread made entirely of freeze-dried and powdered ingredients while Lucas Mullie served guests a meal from his “Infinite Sausage” machine, a contraption that presses and extrudes ingredients to make a block of food, perfect for portioning. On today’s lunch menu: cous cous with apple and raisins, bulgur with roast vegetables and rice with red cabbage. Jolene Carlier’s “Popcorn Monsoon” is a playful appliance that upped the ante for the beloved homemade snack.

The works in progress from the inaugural Food Non Food program give the exhibition a dynamic energy that is atypical for DAE’s Milan presentation. Outside, one student was baking bread and subsisting on a bread-only diet for the week. Her project connected the process of digestion with the process of transforming ingredients into bread. 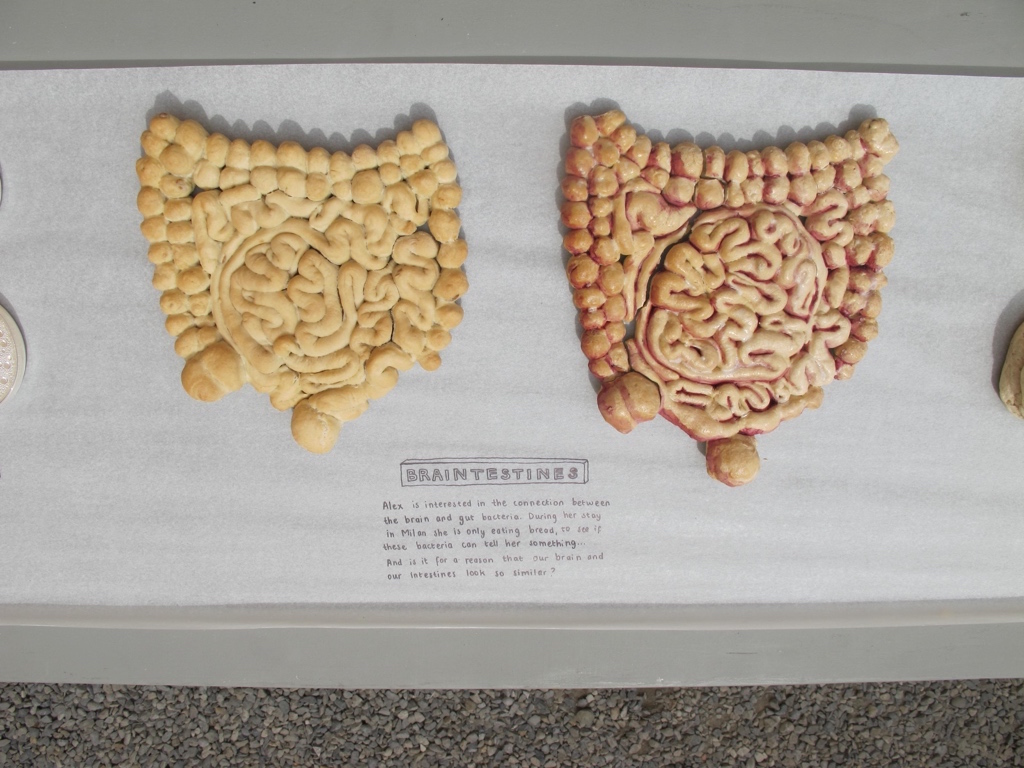 Another student’s project “The Invisible Visible,” was taking swabs from people’s hands or objects (like mobile phones) and growing cultures to determine what types of bacteria we carry around. 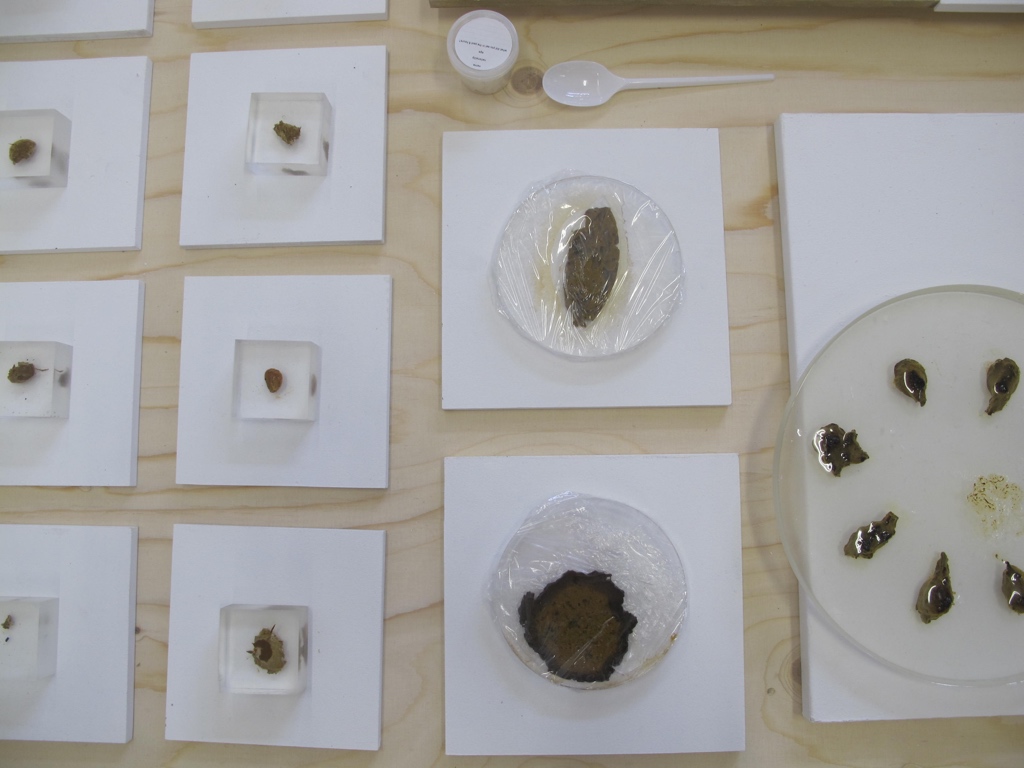 Work in progress from the “Mummy Shit Lab”

But perhaps the strangest project was the “Mummy Shit Lab” where the three students involved in the project have basically created an industrial process where the human body is a material supplier. Working on ways to “mummify” poop in order to create an intimacy between people and their waste, one team member is the producer, meticulously cataloging her food intake and eating specific things in order to produce texture and color in her feces. Another is the refiner, collecting and mummifying the feces by drying it out. And the final team member is the enhancer, working on ways to present the poop to a wider audience. The presentation included a number of different samples encased in resin. The reaction from visitors alternated between disgust and intrigue, which was precisely the point.

Eat Shit is on view now through April 19th at via Crespi in the Ventura Lambrate district.