When it comes to meals that carry a hefty carbon footprint, our guess is that the dinner served by Secret Restaurant at High Desert Test Sites, an experimental event and exhibition space founded by artist Andrea Zittel in Joshua Tree, California, ranks pretty high on that list. Not because the ingredients aren’t all made from local ingredients (and all that important yadda, yadda, yadda), but because the 200-plus guests who made reservations came from as close as down the long, lonely stretch of road, but also as far as Arizona, New Mexico, and, in our case, New York.

So what kind of meal is worth traveling cross country for? Handmade ramen noodles served one of two ways: Tonkotsu style with braised pork belly in a 48-hour broth (above) or with wood ear mushrooms and Peruvian corn (the meaty, chickpea-sized variety) in a vegetarian broth made from a miso, kelp, and shiitake mushroom base (below). Both dishes were finished with sesame, nori, and a perfectly cooked seven-minute smoked egg. 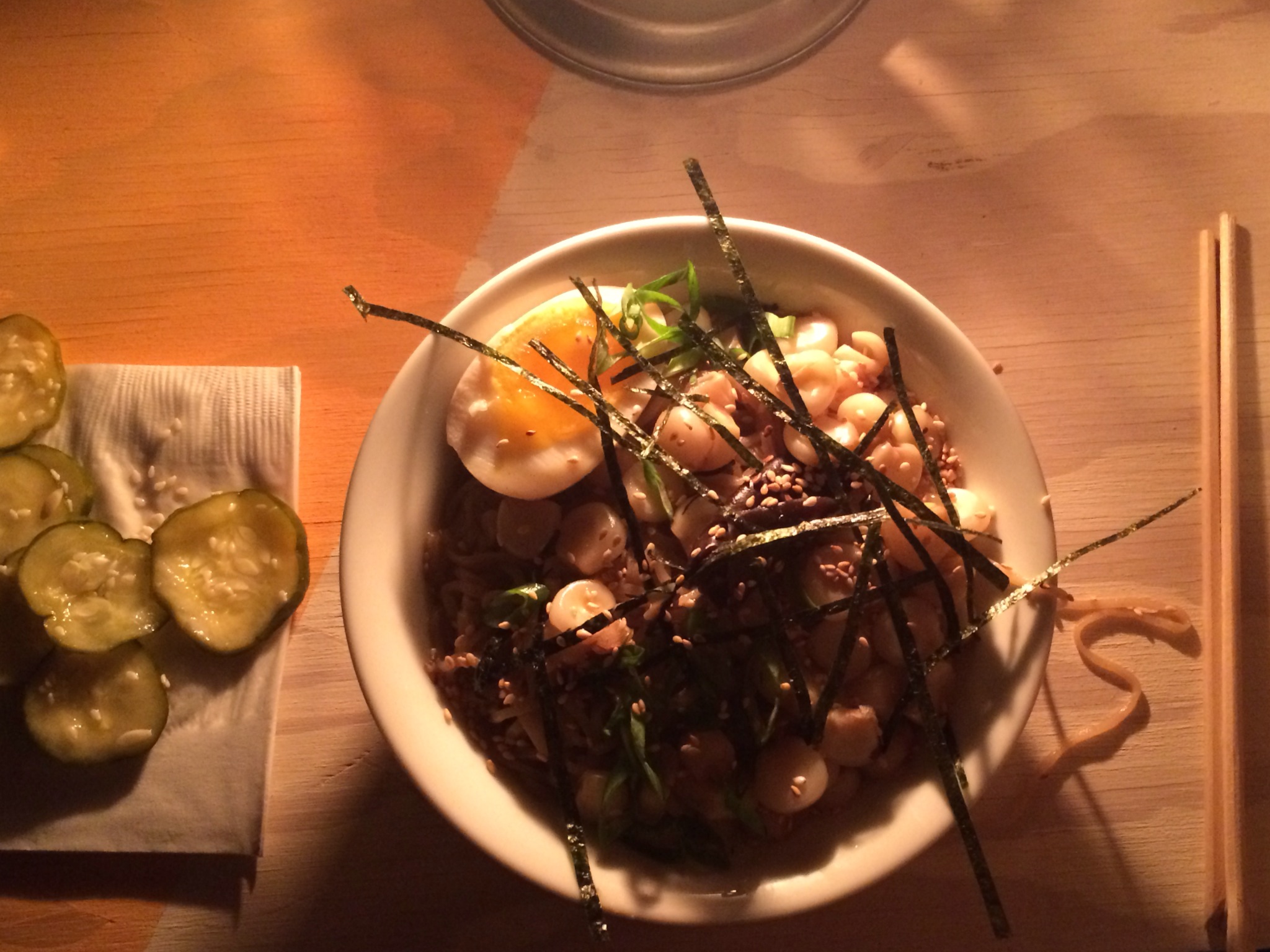 It’s not uncommon for Japanese restaurants to serve a special late-night ramen menu for the kind of food devotee willing to make a dinner reservation at 2am on a Friday night, but Secret Restaurant’s Bob Dornberger and Jim Platt took that idea a couple of major steps further and created a painstakingly difficult-to-prepare menu in a 16-square-foot kitchen that’s made of metal and buried in the ground in the middle of the desert. The gold-leafed rectangular structure that sits atop suggests a restaurant (technically, you could fit a small table and two chairs there), but it also–and intentionally–makes the destination difficult to detect on satellite imagery. 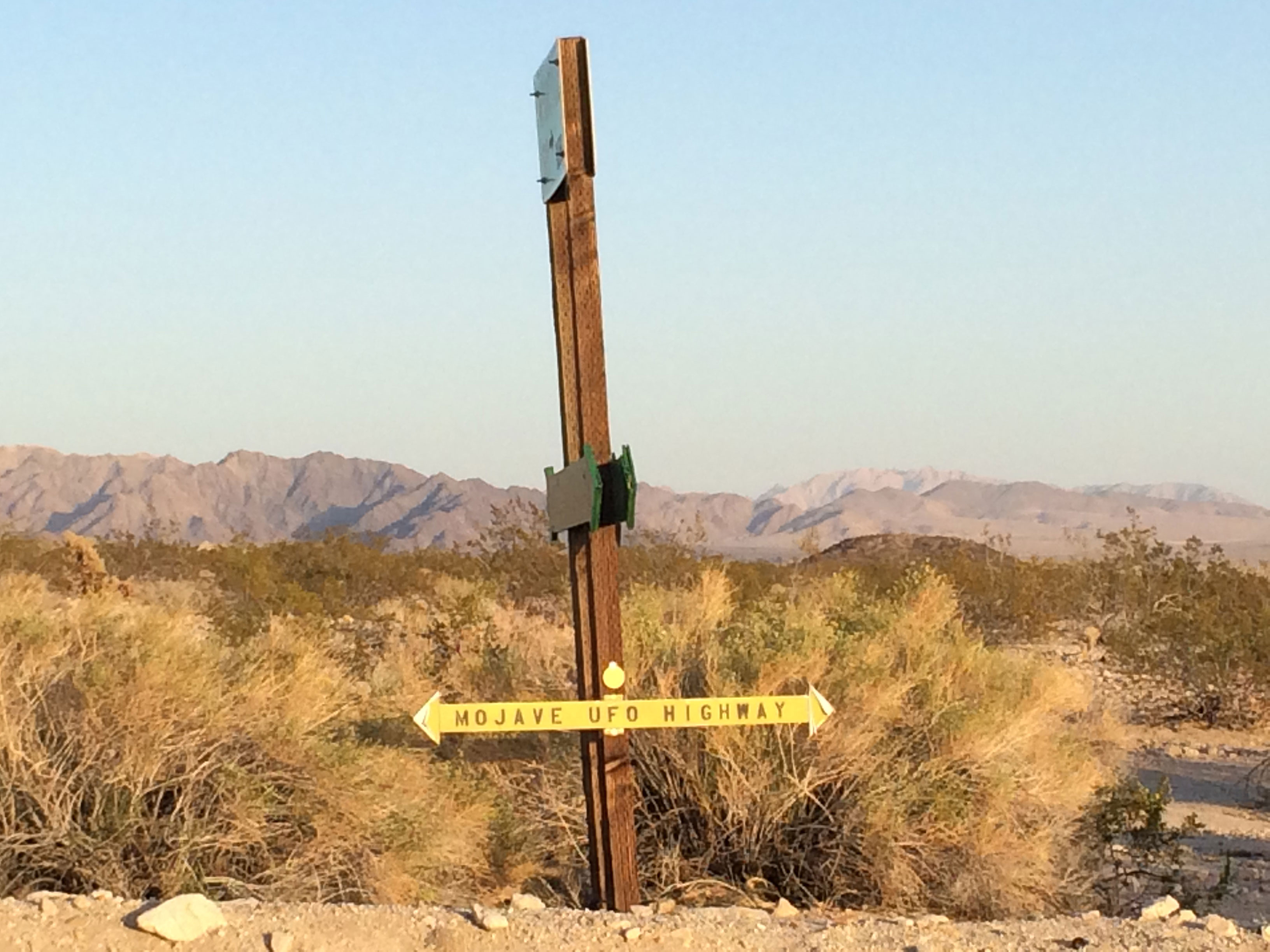 That proved to be a bit of a problem, actually. The “Wonder Valley” address listed on the event’s Facebook page popped up on Google Maps easily enough, but as we approached the location it seemed to disappear. The friendly red destination indicator on Google hung by the side of a highway, but the road we were supposed to turn down never materialized. As we made yet another wrong turn on a road locals have renamed Mojave UFO Highway, we were coming to terms with the fact that perhaps the experience of eating Full Moon Ramen, what Dornberger and Platt refer to as “the sportification of food,” was not eating ramen at all, but driving an hour and a half into the middle of nowhere, our mouths salivating for a spoonful of well-balanced broth and a tangle curly, freshly made noodles with each passing mile, only to realize that you’ve been had.

But Dornberger, who had assured a worried commenter on his website that “you will probably not get lost,” turned out to be right after all. After exhausting several side roads and a few bottles of beer, we came upon a truly bumpy path with cars (the first sign of fellow ramen seekers!) parked at the end of it. We grabbed the bag of beverages and picked our way over a quarter mile of sandy terrain, which mysteriously and sporadically gave way, so that every minute or so someone’s shoe would sink an extra foot into the ground, punctuating the otherwise peaceful evening walk with the occasional “Oof!” or “Ahh!” 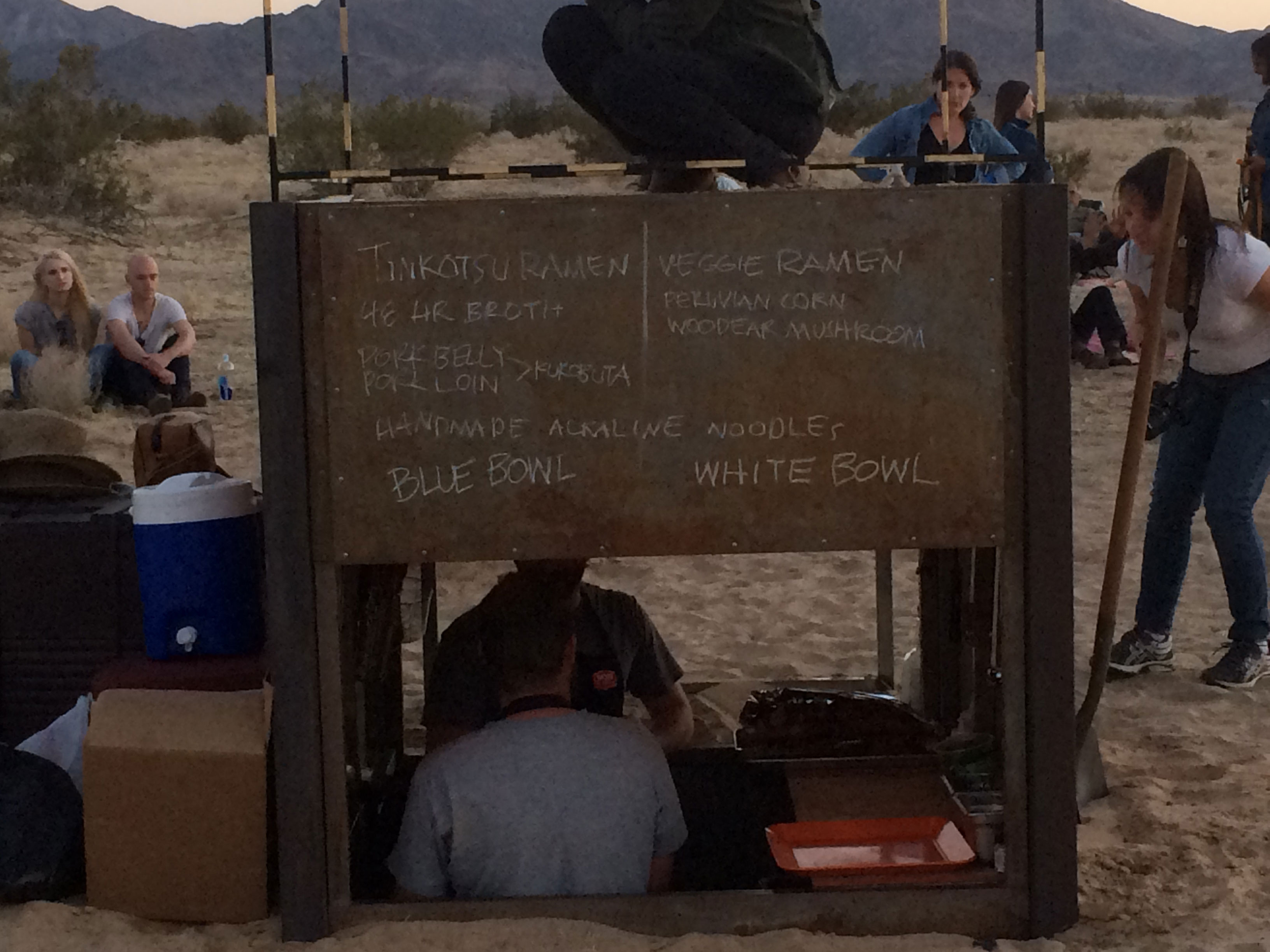 Upon our arrive, Dornberger peered out from the limited window in his underground kitchen and  greeted us by name–even though we had never met. Like the rest of the guests who weren’t quite sure what to do or expect, we uncorked some wine and ambled around the area. If we had wondered why, after driving so far out of the way to get here, did the Secret Restaurant folks insist upon distancing themselves an additional quarter of a mile, it was now obvious. No matter what direction you turned, you were surrounded by 360 degrees of beautifully desolate landscape.

We instinctively queued up as the sun set, and we bet those who were still wandering off and chatting on blankets laid on the ground wished they had, too, because even though we were just 15 people back from the front of the line, it took 45 minutes to receive our steaming bowl of freshly cooked noodles. Each serving was made in a pot of water the size of a keg that had to be reboiled for each batch to ensure optimum freshness. The bowls were then lovingly topped with egg, sesame, two kinds of seaweed, and various vinegars and sauces before being lifted up to our hungry hands. We headed to a bar-height table where dishes of sweet pickle slices awaited, along with chopsticks and spoons, and we quietly tucked into our bowls as the moon lit up the darkening sky.

We finished our wine, packed up our things (no trash or any traces of human presence could be left behind), and made our way around the long line of diners still waiting to eat from a warm bowl in the cooling desert night. Earlier in the night we had asked Dornberger where he got the idea to make noodles, of all things, in an environment like the desert. “It was a no-brainer,” he said. “Why not?” And why trek across the country when delicious bowls of noodles can be had right in our hometown? That’s another no-brainer. We’ve eaten a lot of ramen in our days, but we’ll never forget the bowl we ate on this night. As our pal Robert Frost once said, the journey makes all the difference