The UN Food and Agricultural Organization estimates that we will need to produce 70% more food by 2050 to feed the world’s expected 9.6 billion people. The presumed solution is to intensify agriculture. Truth be told, the earth produces a gargantuan agricultural surplus. This surplus, however, is lost or wasted at every stage of the food system. Wonky fruit is discarded by farms, food is spoilt along its distribution path, and overzealous portion sizes in homes and restaurants end up on a rubbish heap. We need to reframe the question of feeding people from how to produce more food, to how to waste less food. This challenge is purpose built for architects and urbanists.

Whilst chefs, scholars, agri-businesses, technologists and policy makers have all taken a seat at the table to tackle the challenge of food waste, architects are conspicuously absent. Some might argue that waste reduction is more a cultural or political predicament than an architectural one. But, as an applied anthropologist working within a global architecture practice, it is abundantly clear to me that architecture holds the key. Since the vast majority of food waste occurs in cities, and architects furnish cities with buildings that are complicit in our scandalous culture of waste, architects ought to translate waste reduction practices into spaces—spaces that discourage surplus purchasing, spaces that expose wasteful practices, and spaces for collective cooking and dining which optimize the use of perishable ingredients.

Food has become a hot topic in architectural faculties and firms since the 90’s. Yet the focus has been disproportionately focused on food production rather than sustainable food distribution or consumption. Architectural renders are testament to this agrarian zeitgeist. Community gardens, rooftop farms, urban orchards and apiaries are cropping up in renders of future buildings and the spaces in between them. Agrarianarchitecture is often packaged as part and parcel of the industry’s attempt to address the UN’s Sustainable Development Goals that champion food resilience in the face of food insecurity, anxieties about agribusiness monopolization and climate change. However, the sustainability arguments behind agrarian architecture are rendered all but meaningless if strategies to reduce food waste are not incorporated.

Take, for instance, Sasaki Associates’ masterplan for Sunqiao Urban Agriculture District on the edges of Shanghai. Urban farming in all its contemporary permutations—hydroponics, aquaponics, vertical farming—sit side by side with more traditional community allotments. The design is a veritable platter of engaging and educational food production programming. It ticks many agrarian architecture boxes. The walkable food market quarter is an antidote to the sprawling urban conurbations that have divorced people from the realities of food systems and the precious resources at stake. But, nowhere in the design do the architects address the comparatively unsexy topic of food waste—how to mitigate it, redistribute it, turn it into compost, biofuel or even construction material. Lo and behold, Shanghai has the highest rate of food waste per capita in China. Solid food waste accounts for 71% of Shanghai’s municipal waste, compared to 22% in New York. Suffice it to say, reducing food waste would be a more efficient strategy towards achieving food sustainability in China’s most populous city.

Why do architects and urban designers overlook food waste? Part of the answer is that food waste suffers from an image problem. While edible landscapes and fruitful architectural topographies are seen as tools of sustainability, place-making and catalysts for community conviviality, the architectural treatment of food waste is seen as the domain of waste management. We need to move the needle from reactive waste management to proactive waste reduction, or what I call food conservation architecture. From the urban scale of neighborhoods, to the architectural scale of supermarkets and kitchens, food conservation architecture comes in different shapes and sizes.

Planning creates a spatial blueprint for consumer behavior. By mid-century, a change was underfoot in the way we shop for food. The synchronicity of post-war modernist development and the democratization of cars paved the way for supersized supermarkets; cannibalizing convenience grocery stores en route, and churning out food waste at an unprecedented rate by promoting excess inventory and excess purchasing. The economies of supermarket scale allowed the prices to drop, the dizzying choice nudged impulse purchases and the adjoining carparks removed the logic of buying only what could be comfortably carried home. Planning for food conservation demands a more fine-grained urban fabric that is walkable and mixed-use. It demands environments that encourage people to shop in smaller neighborhood shops and less inclined to drive to big box stores and buy in bulk. These principles are the cornerstone of New Urbanism which has dominated western schools of urban thought and practice since the 90’s. Ellen Dunham-Jones, a disciple of New Urbanism, has written and lectured extensively on the opportunities of retrofitting sprawl into walkable districts that cultivate conscious consumers.

Food waste is fundamentally linked to consumer demand. Reducing food waste thus requires changes in the way we value and consume food. With the consumer trend for buying everyday essentials going online, there is greater appetite for offlinefood shopping experiences—reflected in the renaissance of the specialty food store. The return of the neighborhood greengrocer, butcher, fishmonger and baker plays a fundamental role in reducing waste because it creates the space for the exchange of knowledge between buyer and seller. These quotidian interactions are crucial to changing the way we interact with and value food. Whilst the food that sits on supermarket shelves is divorced from the human labor involved in its production, packaged in misleading ‘best by’ labels and grouped in arbitrary quantities, the interpersonal interactions within neighborhood shops remedy these issues. Interactions within neighbourhood shops transform scan-and-bag transactions into moments of value creation that imbue food with a greater value.

Ebenezer Howard, the Founder of the Garden City Movement, was an unlikely frontrunner of the co-(mmunal) phenomenon that is sweeping the industry. He proposed houses with common gardens and co-operative kitchens as early as 1898. Since then, the logic of communal kitchens has manifested itself across the world. From Russia’s kommunalkas, to Peruvian comedores populares, Quebecoise regroupement des cuisines collectives, Mexico City’s comedores comunitarios and Japan’s kodomo kitchens, communal kitchens exhibit the potential of sharing food resources across geographies, generations and income brackets. Based on her global survey of communal kitchens, the Spanish architect Anna Puigjaner writes eloquently about the possibility of Kitchenless housing typologies, both in freeing us (notably women) from the Sisyphean domesticity of kitchen maintenance, as well as the manifold benefits of sharing food resources: providing low-cost meals, enabling social integration and, of course, reducing food waste.

Where are we now? The staggering data around food waste and the catalogue of environmental, social and economic ramifications, has finally captured the headlines. Food waste awareness campaigns, piecemeal initiatives and policies now emerging are encouraging. But there is only so much weight that campaigns, pop-ups and policies can carry. People don’t want messages, they want meaningful interactions that challenge the status quo and change attitudes. Architecture can provide such interactions.

Of course, architects cannot solve the problem of food waste single-handedly. They must collaborate with other disciplines. Luckily, this is something they excel at. Contrary to the starchitecture discourse which paints architecture as the act of a singular hand, few professions are as collaborative. What is more, architects speak the language of multiple bottom lines—financial, environmental, social—and have the ear of many different stakeholders. This complex web of knowledge and connections puts them in the right place and the right time to jump start the food conservation movement. This is not a call to arms, but a call for tracing paper and fine point pens. 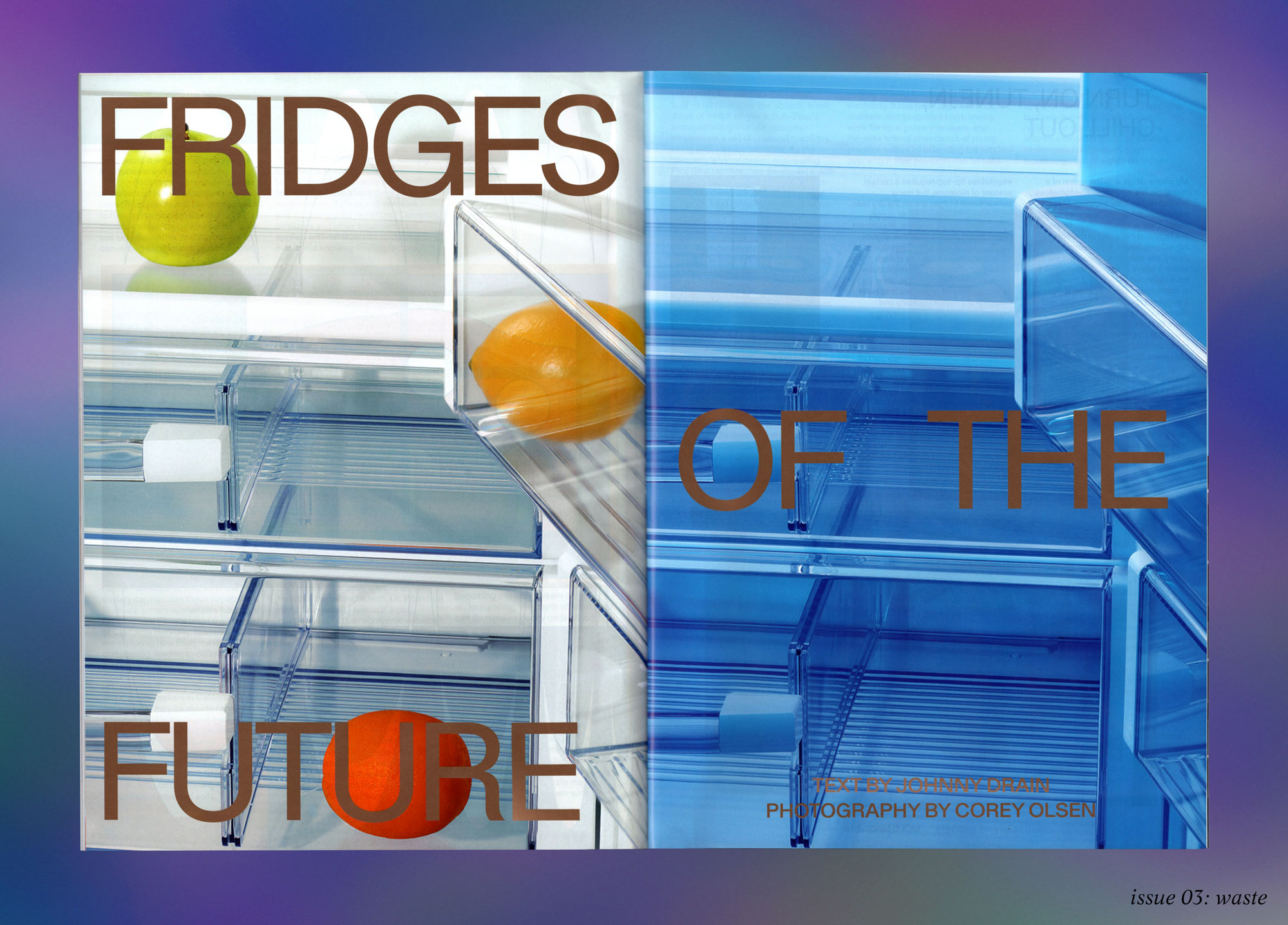