At the most prestigious culinary competition in the world today, the power of food design was on full display. The United States, led by Per Se’s Matthew Peters, took home gold for the first time at the Bocuse d’Or, beating out 23 other competing teams in the two-day competition. But the undeniable “sixth man” for Team USA is Martin Kastner and his team of designers at Crucial Detail.

The Bocuse d’Or is a biennial competition, sometimes referred to as the culinary Olympics. Each team has five and a half hours to prepare two “elaborate platter presentations” accompanied by three original garnishes. Traditionally, it’s been a fish platter and meat platter but in keeping with the times, this year’s competition replaced fish with a “vegetal” platter. Teams are judged on flavor, presentation, technique and efficiency.

As with 2015’s medal-winning platters by Team USA, this year’s presentation had the added flair of bespoke platters designed by Crucial Detail, the Chicago-based studio that has designed serving tools, barware and tableware for America’s temple to molecular gastronomy, Alinea. For 2017’s Gold-medal win, Crucial Detail designed the tooling, service pieces and the meat platter for Team USA. 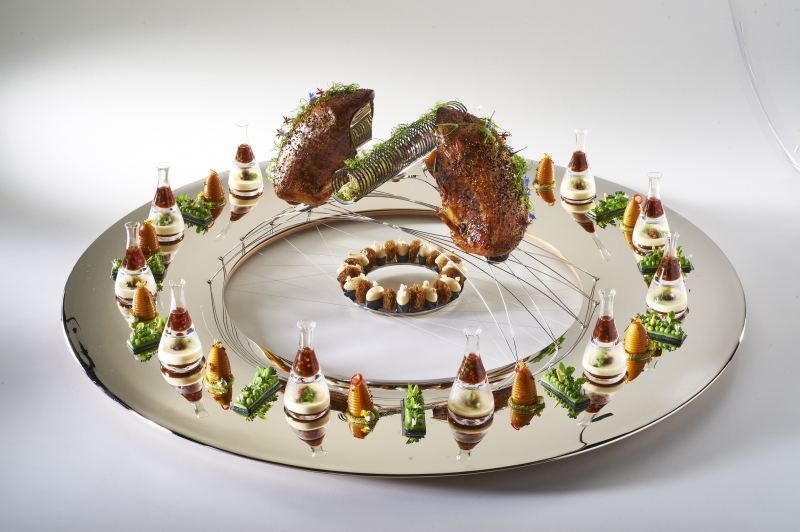 In 2015, Crucial Detail not only designed a meat platter modeled after Napa Valley’s beautiful landscape, but also custom tools used to produce the carefully sculpted dishes within the time constraint. The dish earned Team USA and Chef Philip Tessier it’s first ever medal, a silver. In an interview with M’entor, the professional organization that trains grooms chefs to participate in the Bocuse d’Or, Kastner shared some insights into his process for designing for the competition:

“Most commonly, versatility is one of the primary considerations in tableware and cooking tool design – that generally limits one on many levels due to our preconceived notions of what versatility may be. This often happens subconsciously before even getting to testing one’s ideas. In the case of dedicated, highly specialized competition food, tools, and serviceware, the driving forces are precision, simplicity, speed, and efficiency of the execution of exactly defined culinary concepts. As a result, we get to explore ideas that otherwise might not be considered. It was this process, the understanding that grew from developing the culinary tools together, that we were able to build on in making the food the focal point of the presentation.”