If we can print family photos and Internet memes on birthday cakes, why not print something beautiful? London-based designer Kia Utzon-Frank debuted a collection of sculptural cakes under the brand KUFcakes during Clerkenwell Design Week to turn cake printing into art. Conical structures with simple geometrical pendants, the KUFcakes appear to be constructed from solid marbled stone, but biting into one reveals a densely layered sponge cake with a mousse core. 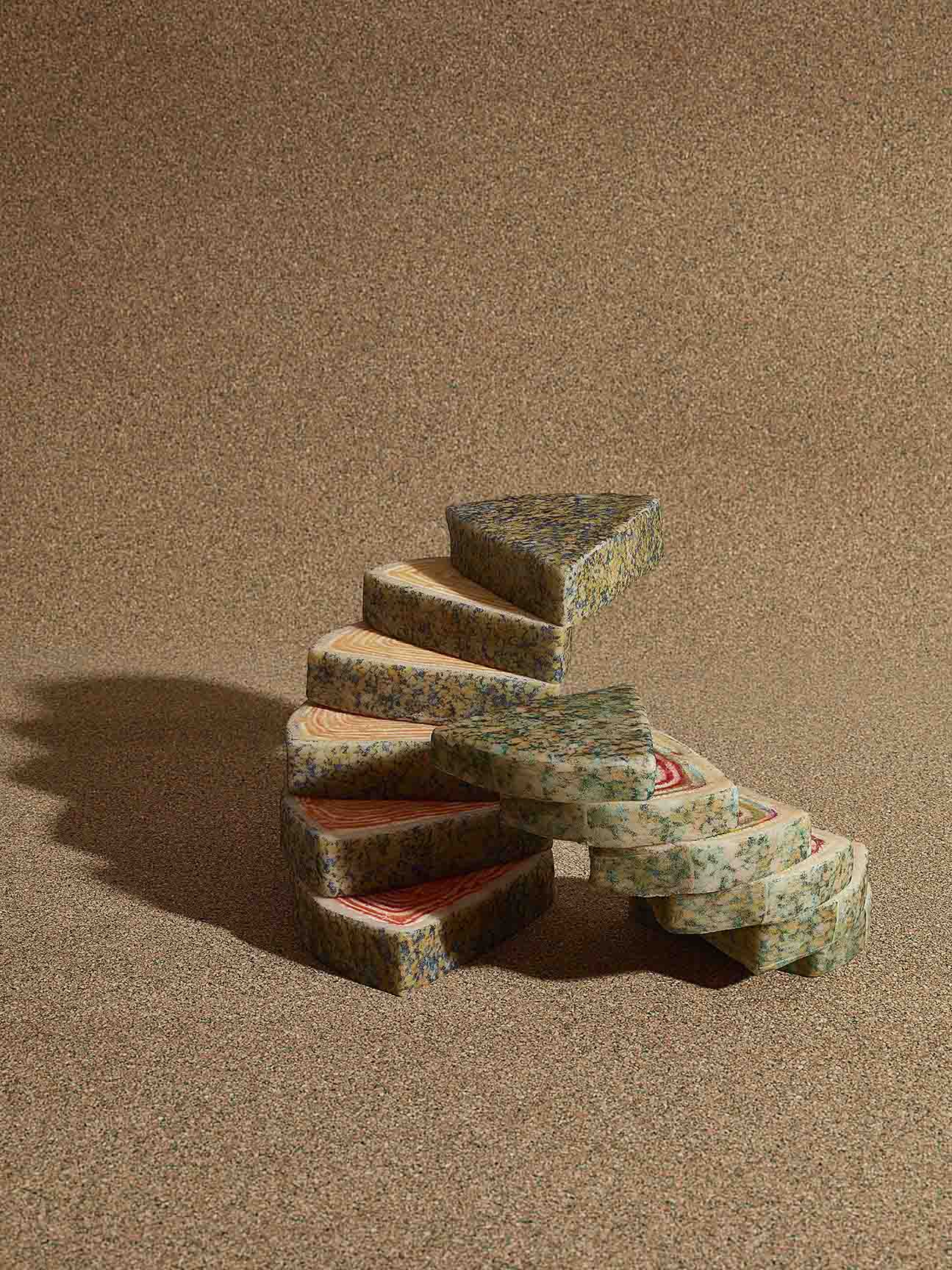 Cork Stairs: Both color and material gradients in these “cork” cakes create a gradient of taste so none of the slices taste the same.

A graduate of the Royal College of Art’s Jewellery and Metal MA program, Utzon-Frank’s approach is based on the exploratory practice of making one model a day. As the designer told MOLD, “I was inspired by similar methods when I was preparing for my final show at RCA four years ago. I didn’t know what I wanted to do and I was scared to fixate myself on an idea too early, so I decided to make a model a day of and with whatever I found interesting. One model followed the other and I found that working intensely with one model for an entire day, it being a complex string pop-up book or cutting a sculpture from an A4 paper, made my brain just shoot out ideas.”

“There’s some misunderstanding that I’m doing a model every day—I unfortunately don’t have the time for that—but when I don’t know what to do or have to start a project I take a good chunk of time out to do a model a day to kickstart my brain. It usually doesn’t take more than a couple of days before I’ve found an interesting path to follow. And I’ve just launched a company (KUFStudios) based on six very different projects, many of them coming from this method,” including the KUFcakes. 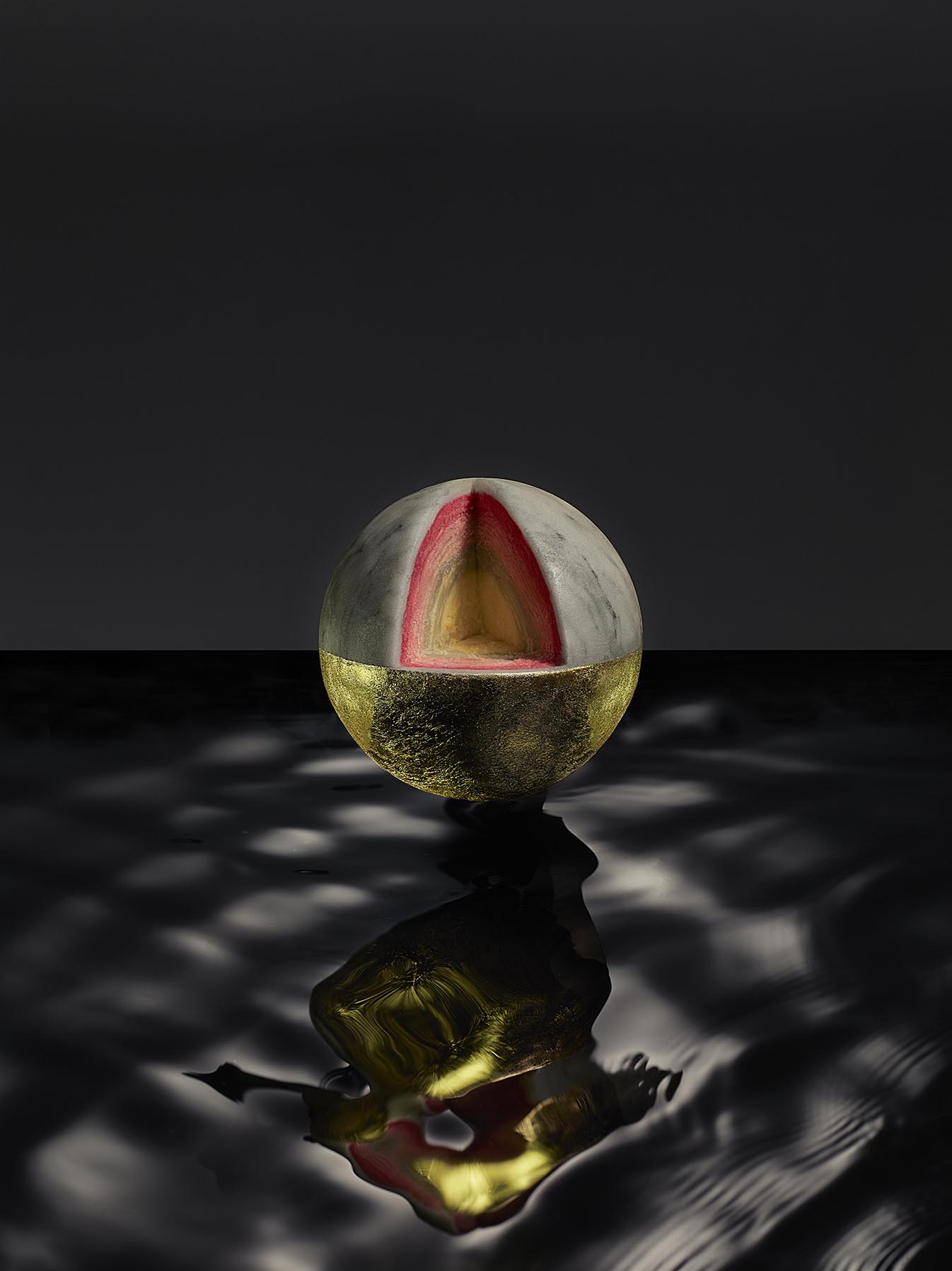 Water Sphere: A spherical cake with a mousse core and layers of cake and white chocolate ganache. Covered in marble-printed marzipan and 24 ct edible gold leaf.

Working with a high-resolution cake printer, Utzon-Frank used natural food coloring and fruit juices to create gradients and marbling on marzipan and fondant. These edible icing sheets are then wrapped around the bolo de rolo, a layered sponge cake popular in Brazil. The colors of the cake are achieved through chocolate ganache or fruit jams spread over a thin sponge cake and then rolled, similar to a swiss roll. Asked about the biggest challenges with working with food as a material, Utzon-Frank shared, “there’s so many things to consider, working with food! I mean, if I fuck up it doesn’t just mean that I’ve made a non-functioning prototype or I’ve designed something ugly–people can get sick.” Although the designer has not trained in pastry, she studied food safety issues and approached the task of creating the edible sculptures with the tenacity of a designer. Experimenting with different food coloring and juices, Utzon-Frank worked on various prototypes (below) to create a convincing stone effect and the right balance of shape and structure in the cake.

Utzon-Frank sees the KUFcakes as a potential for collaboration, marrying visual touchstones with a journey of taste. Her first collaboration, with the textile designer Camille Walala, debuted simultaneously during Clerkenwell Design Week. As of what’s next, “I want to be able to use my own marzipan, so I can incorporate tastes into the marzipan as well and not just have to use the ready made stuff. All I want for Christmas is my own marzipan printer.”