How would you feel being told, on your own podcast, that “you are basically a fungal mass”?

Joe Rogan looked befuddled when his guest that evening, a self-taught mycologist, broke the news to him. A titan in the field, Paul Stamets has no obvious connection to historian Yuval Noah Harari—the bestselling author of Sapiens, who is a popular prophet among the Davos set (he made his second appearance there just before the pandemic)—but Berlin-based critical food designer Alexandra Genis has brought them together in the epigraph to the first publication of her latest project, Biogenes.

If Harari’s provocation—that “[wheat] plants domesticated Homo sapiens, rather than vice versa”—planted the seed of the speculative work-in-progress, it is Stamets who germinated it. As Genis recounts, “I was carrying around these bits of ideas in my head about how agriculture might not be the best of all food production systems and how we could coexist with fungi—like a big cloud around me.” Things clicked when a “very fertile conversation” with fellow designer Bryan Ortega-Welch inspired the first green shoots of the project, which is premised on Harari’s reassessment of the last 10,000 years of human history, deploying mycology at scale as a near-future counterfactual to the Agricultural Revolution.

The upshot of this cross-pollination is Biogenes, which Genis describes as “a wearable, post-agricultural food production system based on microbes, which shall liberate humans from the need for occupying land to survive.” Something like a gut microbiome turned inside-out, this “living suit”—made of “synthetically engineered microbes that are able to ferment lignin and other plant material into an edible substance”—is conceived as a mutualistic food source, sustaining the host and “exobiome,” as they call it, alike.

The name is a riff on Diogenes in homage to the Greek philosopher, notorious for a nomadic lifestyle in which he lived in a barrel; pronounced by-AH-jin-eez, it sounds less like a pharmaceutical company and more like the “post-agricultural myth” that Genis and Ortega-Welch have in mind. Here, they’ve taken up Harari’s invitation in Sapiens to “think for a moment about the Agricultural Revolution”—which he pointedly calls “history’s greatest fraud”—“from the viewpoint of wheat”:

Ten thousand years ago wheat was just a wild grass, one of many, confined to a small range in the Middle East. Suddenly, within just a few short millennia, it was growing all over the world. According to the basic evolutionary criteria of survival and reproduction, wheat has become one of the most successful plants in the history of the earth. In areas such as the Great Plains of North America, where not a single wheat stalk grew 10,000 years ago, you can today walk for hundreds upon hundreds of kilometres without encountering any other plant. Worldwide, wheat covers about 2.25 million square kilometres of the globe’s surface, almost ten times the size of Britain. How did this grass turn from insignificant to ubiquitous?

Wheat did it by manipulating Homo sapiens to its advantage.

He goes on to note that “the word ‘domesticate’ comes from the Latin domus, which means ‘house’. Who’s the one living in a house? Not the wheat. It’s the Sapiens.” Hence Genis’s insistence on “No house!” and rejection of appliances, instead “transporting all activity onto/into the human body itself.” Skipping past the part where the gradual or sudden cessation of agriculture would certainly predicate or be predicated on a cataclysmic winnowing of sapiens, she and Ortega-Welch “envisioned a post-apocalyptic reality in which humans live as nomads, in tribes or alone, wearing these suits. Their main goal is to restore lost biodiversity, so they wander around, pollinating plants and distributing spores and seeds. Individuals might have different suits based on functions.”

Initially characterized by Ortega-Welch in their publication as a puffy coat “that fills up with food,” the current iteration looks something like a reef-encrusted wetsuit, bedecked with gland-like, color-coded blobs and tendrils (“different areas of the suit are used for different food products”), as though microorganisms metastasized into full-fledged appendages or accoutrements, like a fungal exoskeleton. Although Genis questions her auteurist education at the Design Academy Eindhoven—where she graduated from Marije Vogelzang’s Food Non Food department in 2018—this first incarnation of Biogenes takes the form of eye-popping graphics that evoke Dutch Design. (Ortega-Welch, for his part, is currently completing his MArch at Harvard GSD.)

Rendering possible futures is, of course, the paradox of speculative design—illustrating a concept in detail at the risk of overdetermining it—and Genis offers a caveat to the preliminary sketches: “The visual language which Bryan and I developed for the publication was meant to communicate [the concept] experimentally and humorously. … Future versions of Biogenes will likely have completely different choices in tone of voice and artifacts.”

And to the extent that Genis describes the output of her studio, TAS2R, as “gastrointestinal science fiction,” Biogenes is currently more fiction than science, which is precisely the point. Both the kingdom of fungi and the skin microbiome are, in fact, still poorly understood by scientists and laypeople alike, which means that the science may well be out there, waiting to be discovered, somewhere between the human epidermis and the as-yet-unexplored corners of the fungal kingdom.

For now fiction will have to suffice—even if the truth is often stranger. Long associated with decay and regeneration, mushrooms have occupied a place in cultural and spiritual imagination for centuries if not millennia, from Anna Karenina (Genis originally hails from St. Petersburg) to the video game Animal Crossing. Moreover, mushrooms are merely the most salient members of the multifarious, mutlifaceted fungal kingdom, which numbers well over a million species, some 90% of which are undocumented. Beyond produce-aisle boletes and mind-altering psilocybin, Genis mentions Cordyceps, a parasitic fungus that zombifies insects by hijacking their brains (memorably documented in David Attenborough’s Planet Earth).

We humans, for better or for worse, are more likely to encounter Trichophyton—commonly known as the genus of fungi that causes athlete’s foot; at one point, Ortega-Welch pithily describes Biogenes as ”a controlled yeast infection.” Yet these pathogenic fungi pale in comparison to the trillions of benign denizens of sapiens: by various accounts, there are anywhere from 1.5 to ten times as many microorganisms inside the body as there are human cells and upwards of three times as many “skin flora” on our surface.

A re-imagination of human dermal cells as chlorophyll-producing cells. Artwork by Alexandra Genis and Bryan Ortega-Welch.

As much a microcosm as a microbiome, skin is also known as “the largest organ.” Perhaps it is no coincidence, then, that a single 3,500-ton fungus, sprawling beneath 3.7 square miles of Oregon, holds the title of the world’s largest organism. Considering that dermatologists are only beginning to understand the complexities of the epidermal ecosystem, it may well be the case that our future symbiotes are merely waiting to be discovered (if the current pandemic is any indication, biological forces are always just a few short mutations from upending life as we know it).

To that end, Genis expresses a desire to “work with scientists from various fields [to] develop this into something real.” If it remains impossible to predict where the project might go, it is also worth noting that it is in fact the ethical argument of Sapiens—Harari reportedly inspired Benjamin Netanyahu to start doing “Meatless Mondays”—that Genis finds most compelling:

Maybe I secretly wish for something like the end of food, because I find food to be such a big burden in so many ways—we’re so used to it, but [it’s so] destructive to grind other organisms with our teeth so we can incorporate the nutrients accumulated in their cells into our own bodies. Also, the ownership of food resources has led to unhealthy power-dynamics ever since the advent of agriculture.

But maybe the most relevant reason would be that food production has caused the exploitation of the environment around us and I feel guilty about it.

This echo of Harari’s contrarian macrocosmic account of the Agricultural Revolution as “the ability to keep more people alive under worse conditions” belies the simple fact that the relationship between sapiens and wheat has always been symbiotic, mutually beneficial by his own definition of the “evolutionary success of a species” as “the number of copies of its DNA” (in fact, one could also construe yeast—a key ingredient, along with grain, of certain leavened and fermented foodstuffs—as an example of how fungi also exploit humans to propagate themselves).

Just as Harari also acknowledges that “no single step separated the woman gathering wild wheat from the woman gathering domesticated wheat, so it’s hard to say exactly when the decisive transition to agriculture took place,” so too does Genis knowingly characterize Biogenes as the “(maybe goofy) dream of a deeper, non-exploitative connection of our hungry bellies and the natural world.” After all, she—like you and I and everyone we know—is already basically a fungal mass. 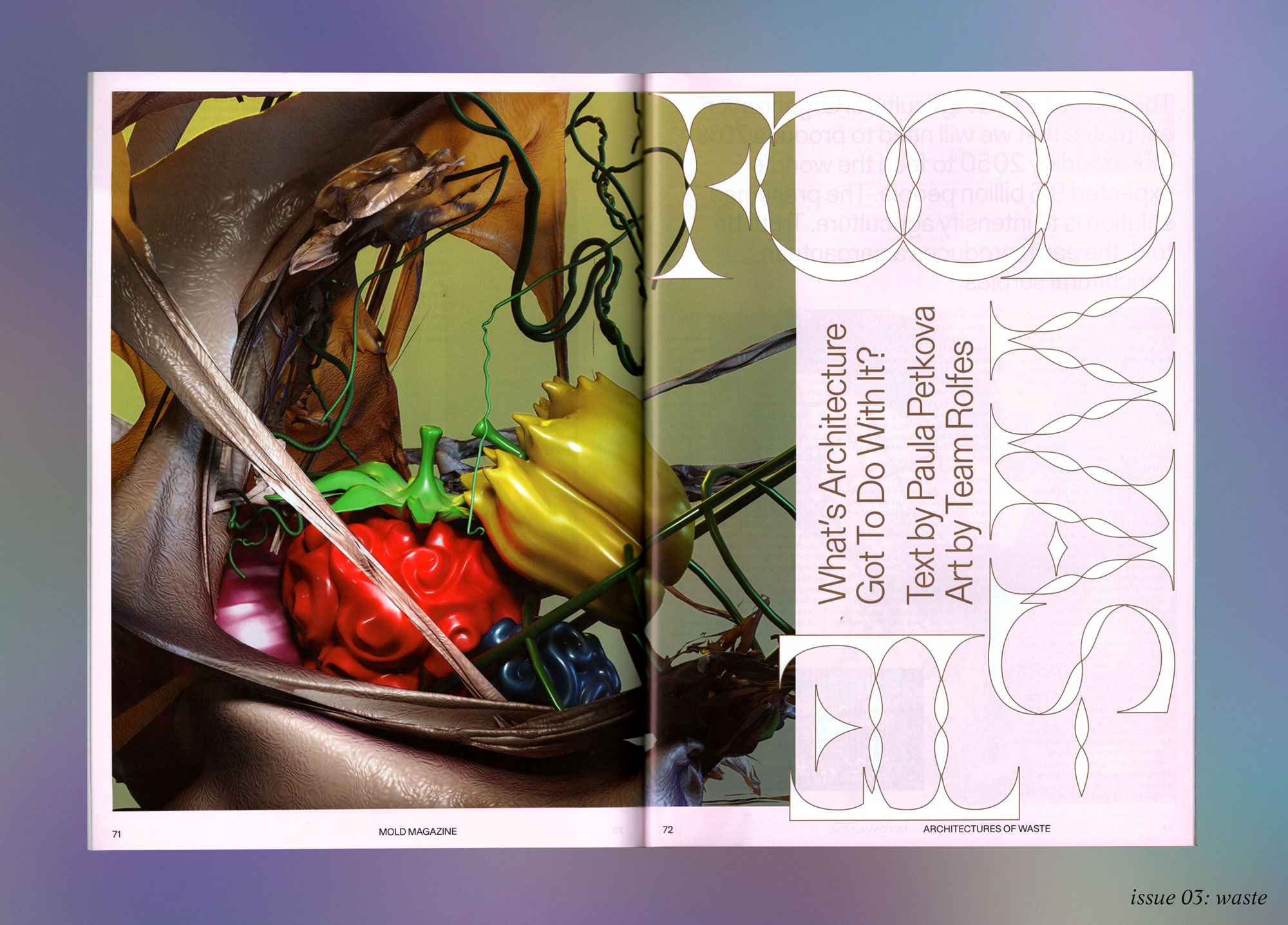