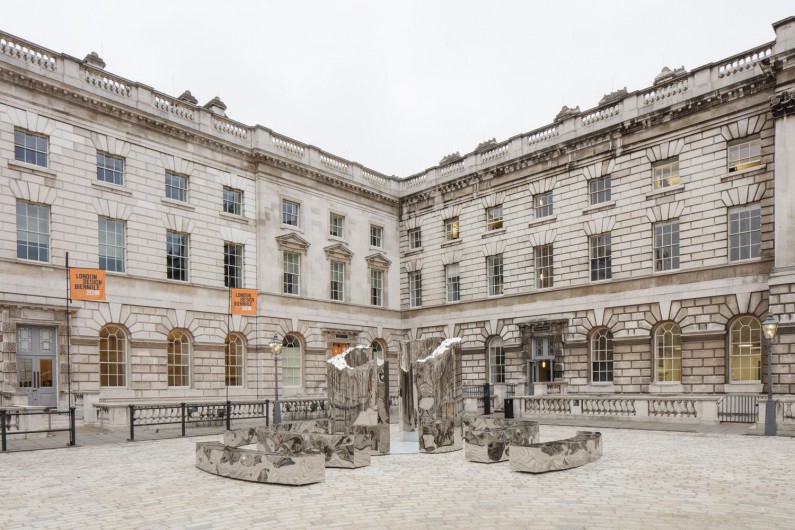 Can Utopia be designed? For the inaugural London Design Biennial, 35 countries representing six continents present their vision for our collective future by proposing solutions and asking questions around the theme Utopia by Design. Tackling questions around urbanization, energy, sustainability, security and social justice, the design teams were commissioned to present new works within the context of the theme.

2016 marks the 500th anniversary of the publication of Sir Thomas More’s Utopia, a fictional commentary that depicts “no place,” an island society and it’s social, religious and political landscape. Taking inspiration from More’s groundbreaking text, designers participating in the 2016 London Design Biennial were encouraged to, “create installations that interrogate the history of the utopian idea, and engage with some of the fundamental issues facing humanity.” In this year’s presentations, eight country pavilions engage with questions around designing a sustainable food future through three major themes of food as culture, waste reduction, and food and water security. 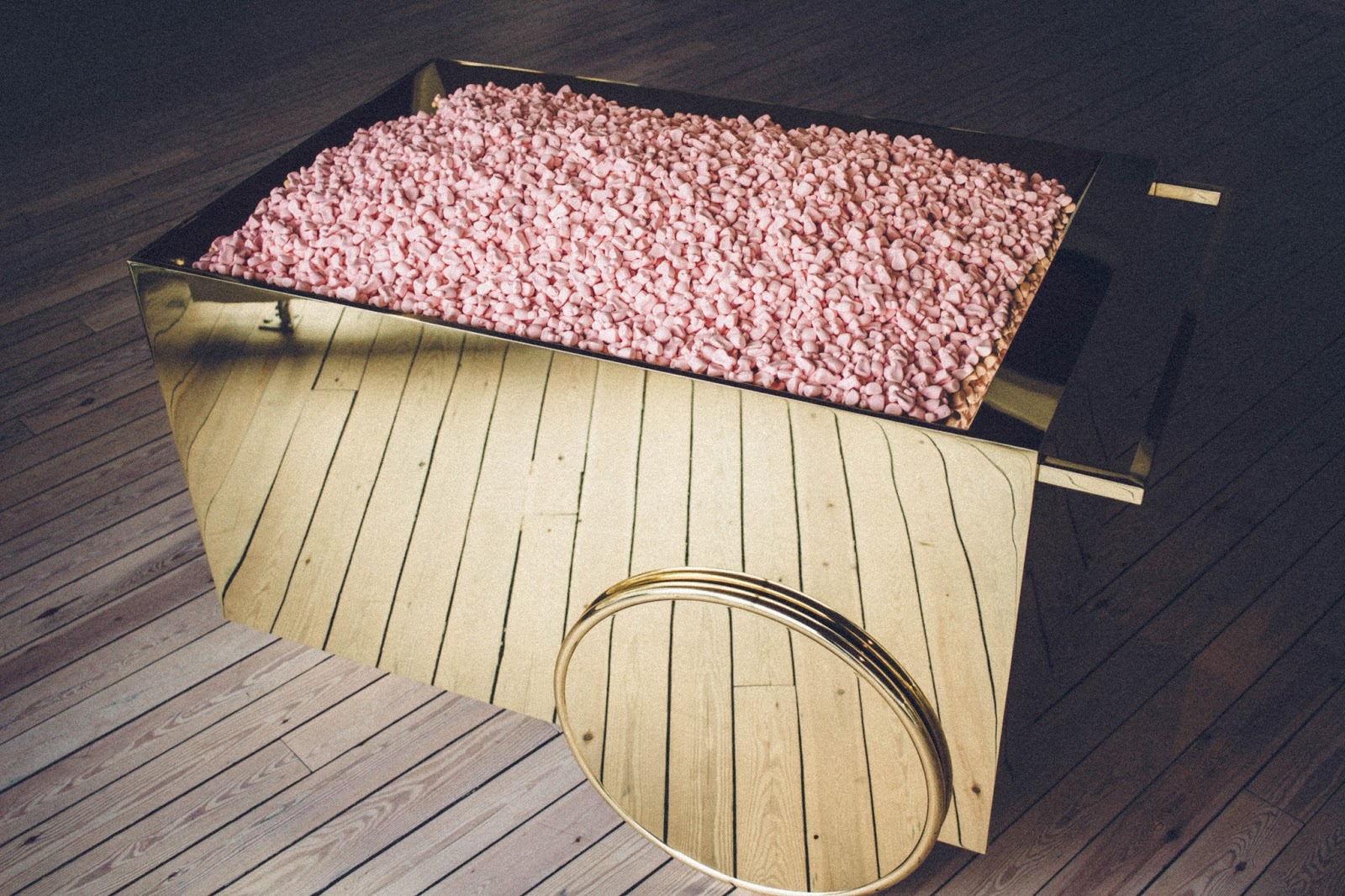 France
The Astounding Eyes of Syria/Le Bruit des Bonbons by Benjamin Loyauté
Through the universal appeal of candy, designer Benjamin Loyauté invites attendees to taste the “sweet memories” of displaced Syrian refugees of the ongoing civil war. In an 18-minute film shot by the designer earlier this year, refugee families recount stories of once ubiquitous candy stores and personal stories of sharing sweets—memories of a past utopia that is both specific and universal. Visitors can then purchase packets of Loyauté’s candies—an edible sculpture modeled after a 4th century Assyrian artifact called the Eye Idol—to support efforts to educate refugee children. 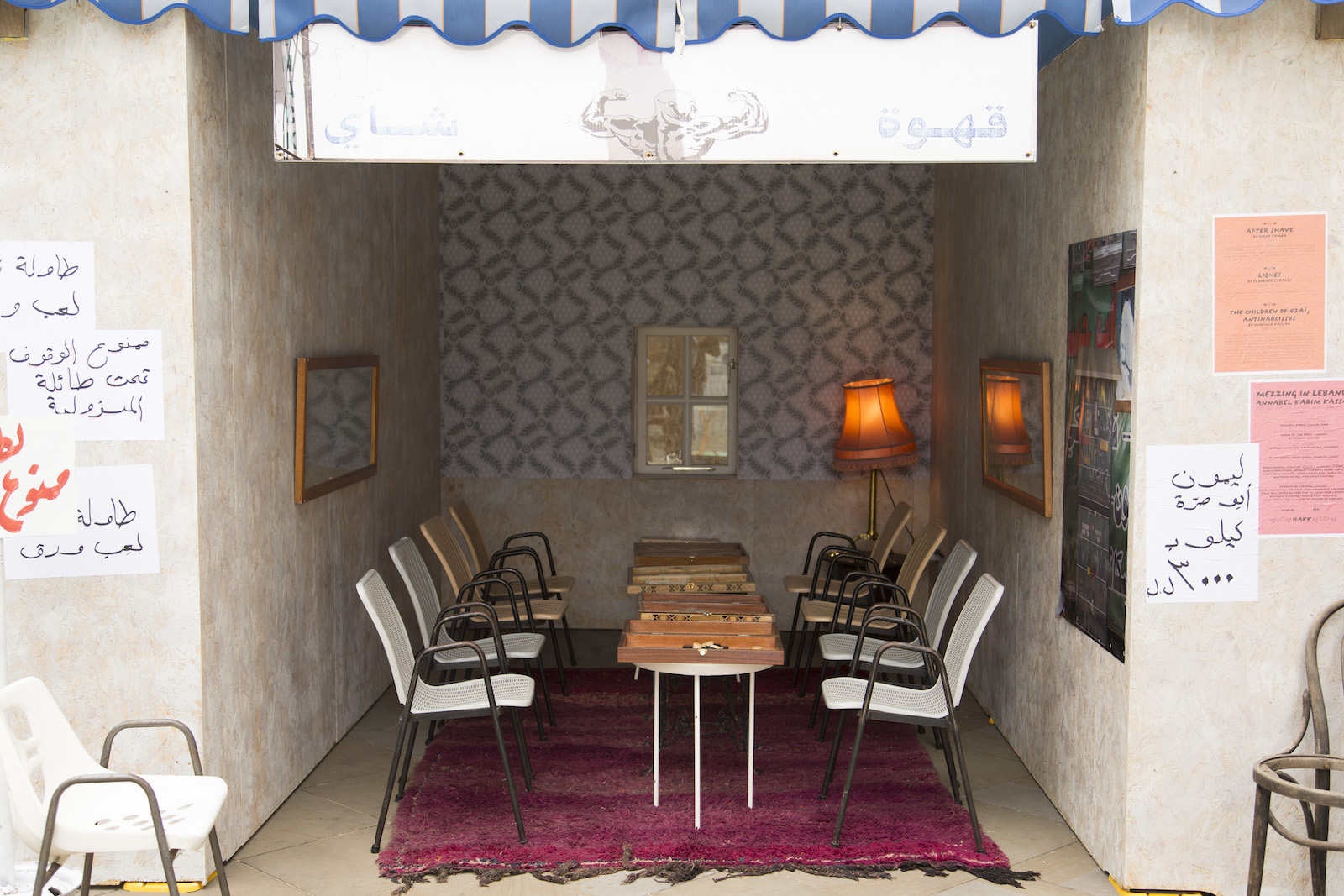 Lebanon
Mezzing in Lebanon by AKK Architects
Utopia is often elsewhere, glimpsed in far off travels and stirred through conversations with strangers. Architect Annabel Karim Kassar celebrates the “ingenuity and optimism” of the Lebanese people by recreating the bustling street life of Beirut on the River Terrace of the Somerset House. Visitors can enjoy street food by restauranteur Mourad Mazouz (Momo and Sketch, London) on improvised street furniture brought in from Lebanon, smoke narghiles, watch artisans sew traditional Arabic mattresses or take in a Lebanese film. 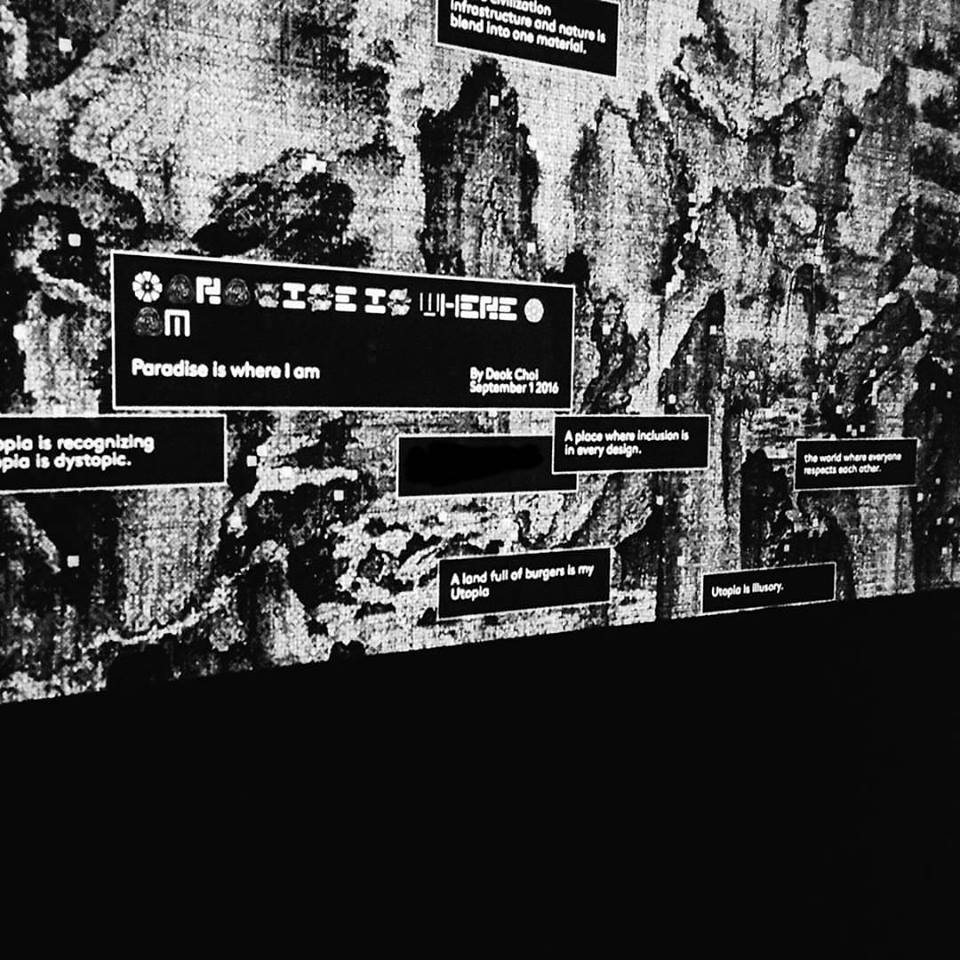 South Korea
Peach Blossom // Mong Yu Do Won Do by Austin S. Lee, Goo-Ryong Kang, Jaewon Seok, Sungjoon Steve Won, Kiheon Shin, Jeeyeon Ha, Jae-Hyouk Sung
When the Korean artist Ahn Gyeon illustrated his vision for Utopia for the Joseon royal court in 1447, he painted a serene orchard surrounded by mountains. Using this as a starting point, the team behind South Korea’s pavilion created a digital, interactive map that can be manipulated and navigated through different levels of abstraction. Visitors and the public are encouraged to help build the map by sharing their own visions of Utopia on site or through the Peach Blossom website. 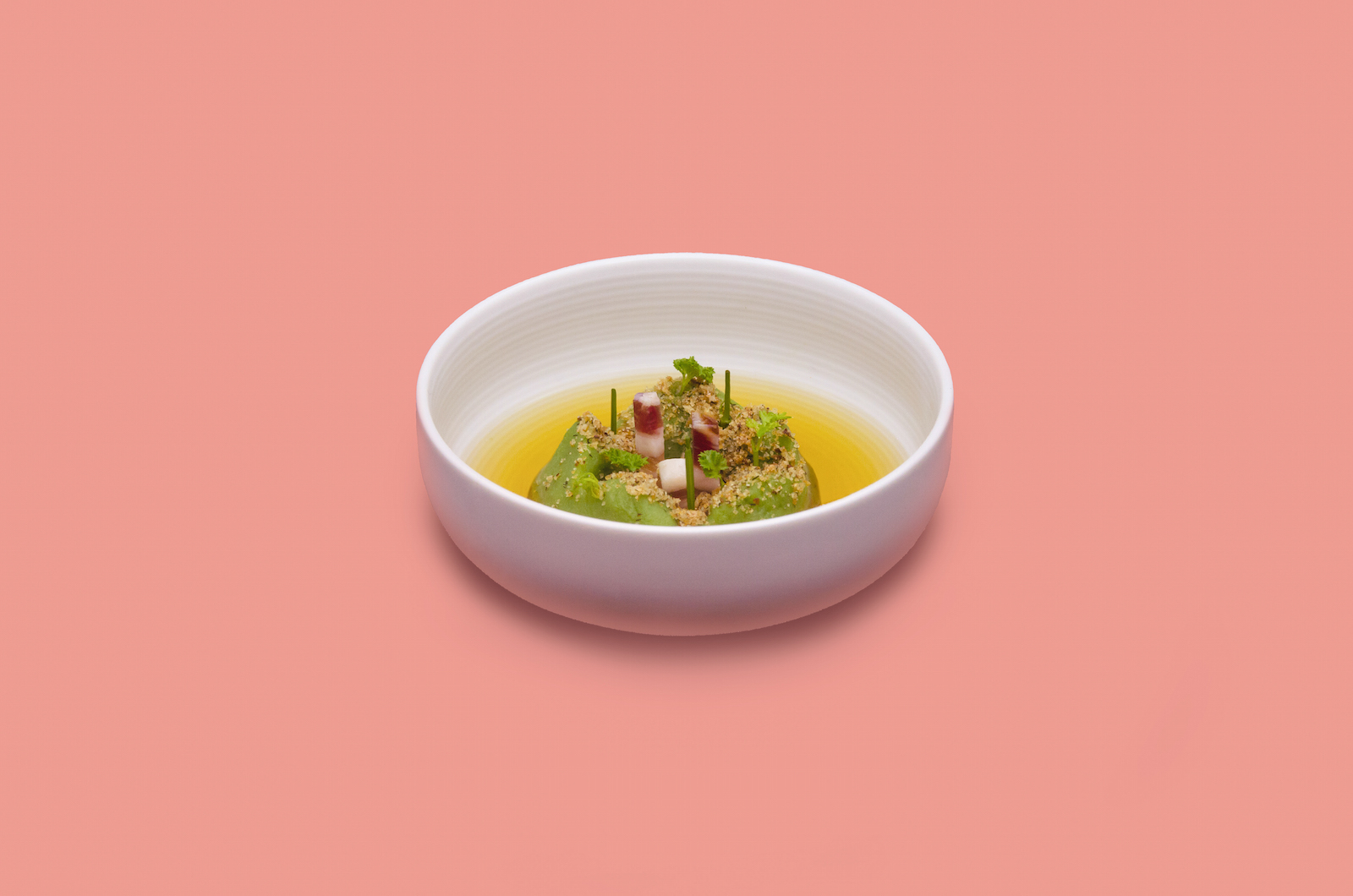 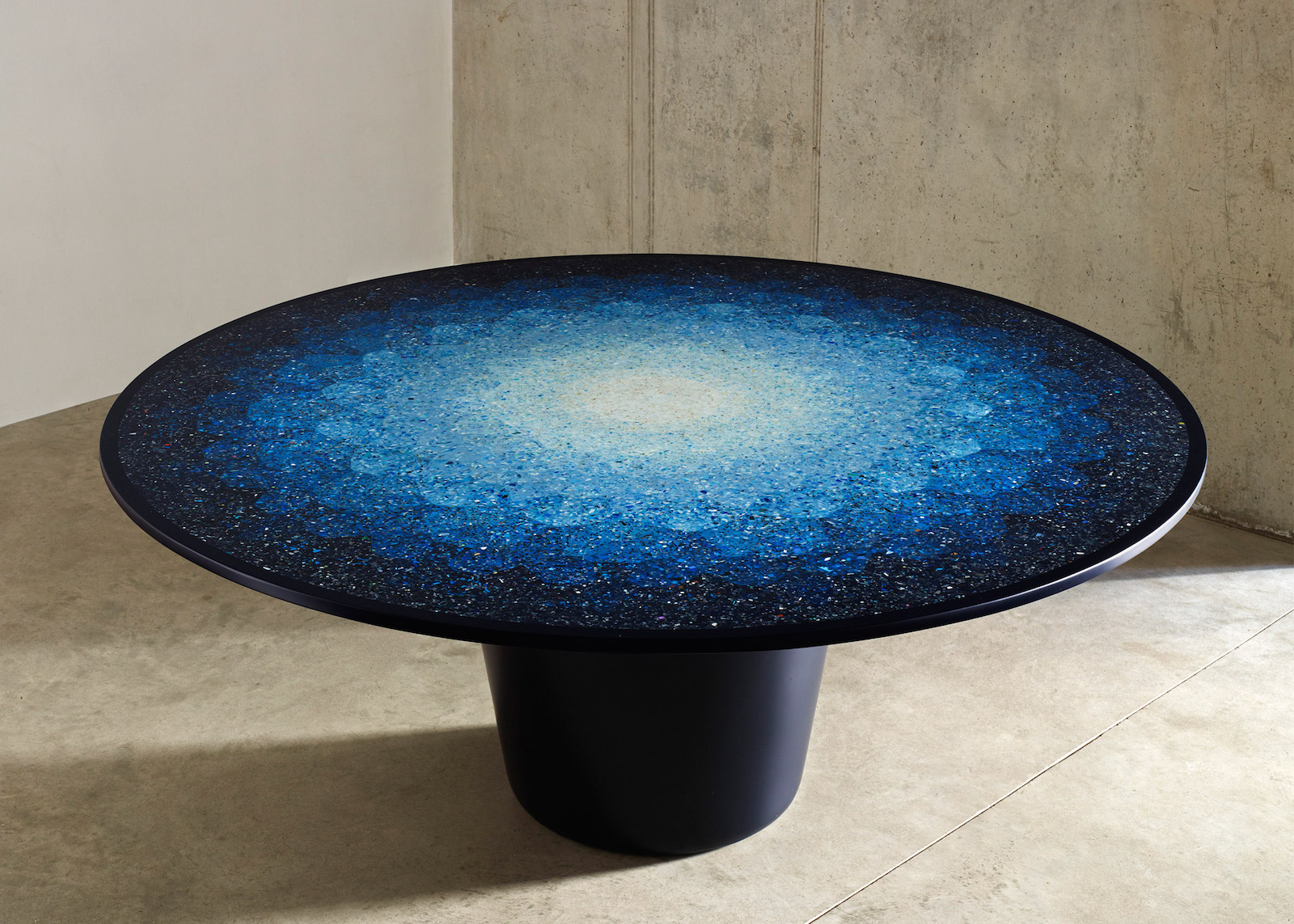 Australia
Plastic Effects by Brodie Neill
Plastic, once a utopian material, has become a life-threatening problem—five trillion pieces of plastic have found their way into our ocean ecosystems with thousands of tons of debris washing up on Australia’s coastline every year. Designer Brodie Neill’s installation confronts visitors with this reality through objects created with marine plastic—plastic fragments harvested from the ocean, separated by color and then inlaid in a resin to form a terrazzo-like material. Neill hopes his Gyro table will spur industrial scale recycling of ocean plastics to produce new materials. 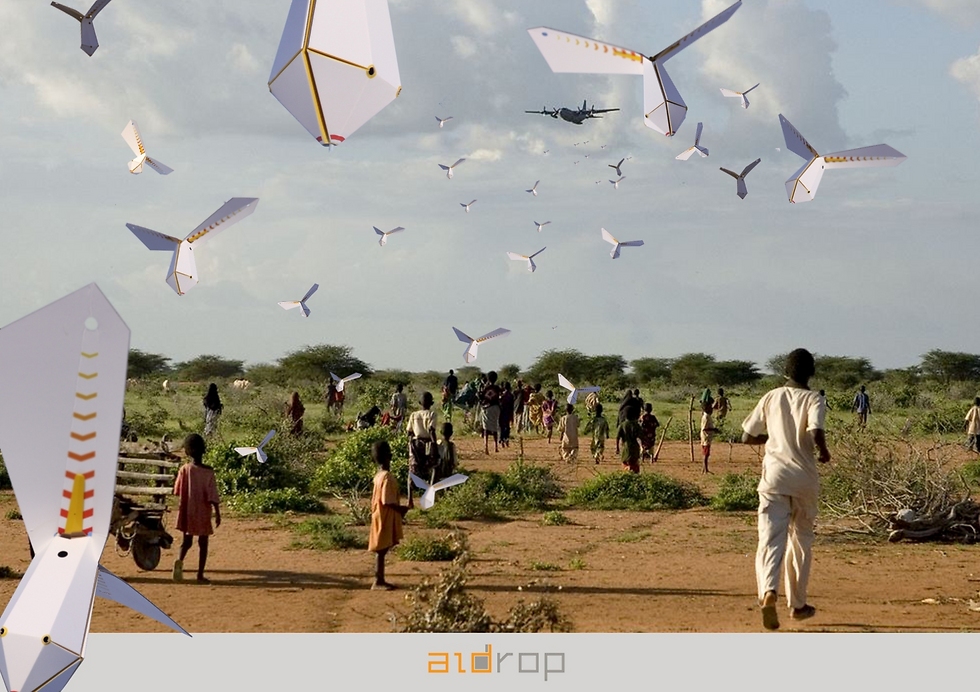 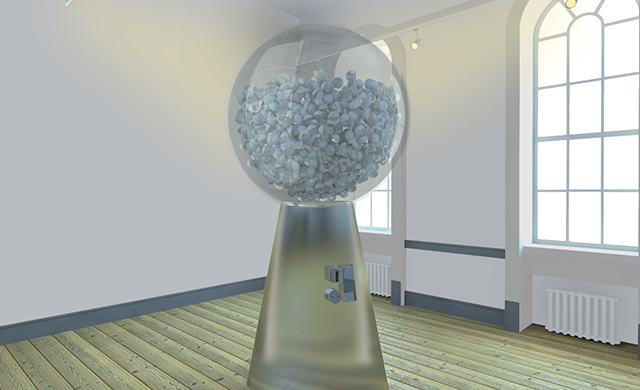 Saudi Arabia
Water Machine by Basma Bouzo and Noura Bouzo
In their native Saudi Arabia, potable water is derived from a specific kind of alchemy that pumps sea water through desalination plants—an expensive and energy-intensive process. Sisters Basma and Noura Bouzo of Oasis Magazine created a giant gumball machine to distribute acrylic spheres, symbolizing water, to those lucky enough to have the right currency. 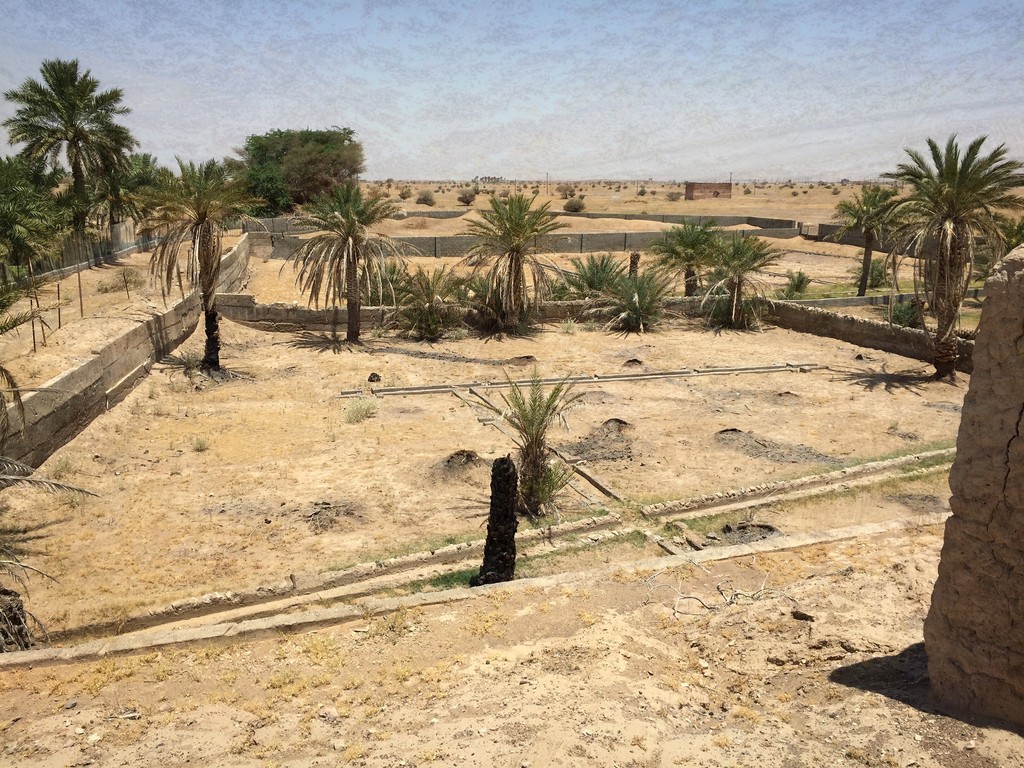 United Arab Emirates
Al Falaj: Water Systems of the Gulf’s Oases by Cultural Engineering and Case Design
The Al Falaj water system once stretched across the Gulf to irrigate agricultural plots, growing produce and desert communities. Cultural Engineering, the creative services consultancy arm of Brownbook Magazine propose ways that these channels might be adapted for contemporary purposes in rapidly globalizing cities. As the team points out, “as well as an effective agricultural system, Al Falaj is a utopian idea in nature,” a place where the public and private realms overlap and facilitate exchange.

The 2016 London Design Biennial: Utopia by Design is open seven days a week at the Somerset House. Now through September 27.

Posts from the editors at MOLD. You can contact us at editors [at] thisismold [dot] com 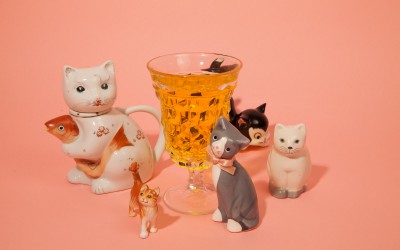 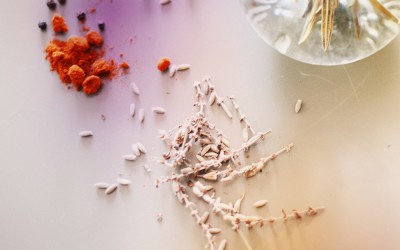 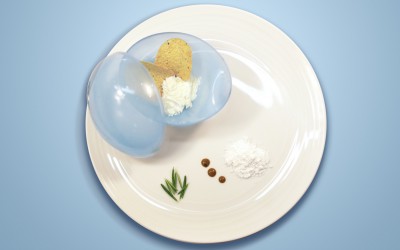 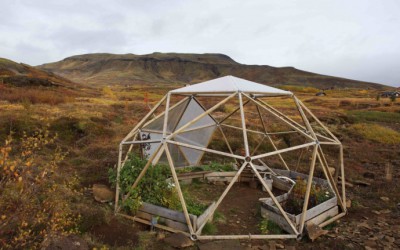 Event
On Markets, Movements and the Politics of Food