From orange chicken to fortune cookies, there are certain foods that blur the lines of Chinese and American food. Instead of enforcing categories, we can celebrate the unique creations of Chinese American food—egg rolls, General Tso’s chicken, duck sauce and more—in the larger American lexicon of food. Despite its popularity, the history and stories of the people who cook it are less well known. With two strong exhibitions currently on view in New York City, food historians and curators are setting out to change that. We previously spoke with the designers behind the Museum of Food and Drink’s CHOW exhibition, and as a preview for the weekend, we take a visit to Sweet, Sour, Bitter, Spicy at the Museum of the Chinese in America in Downtown Manhattan. 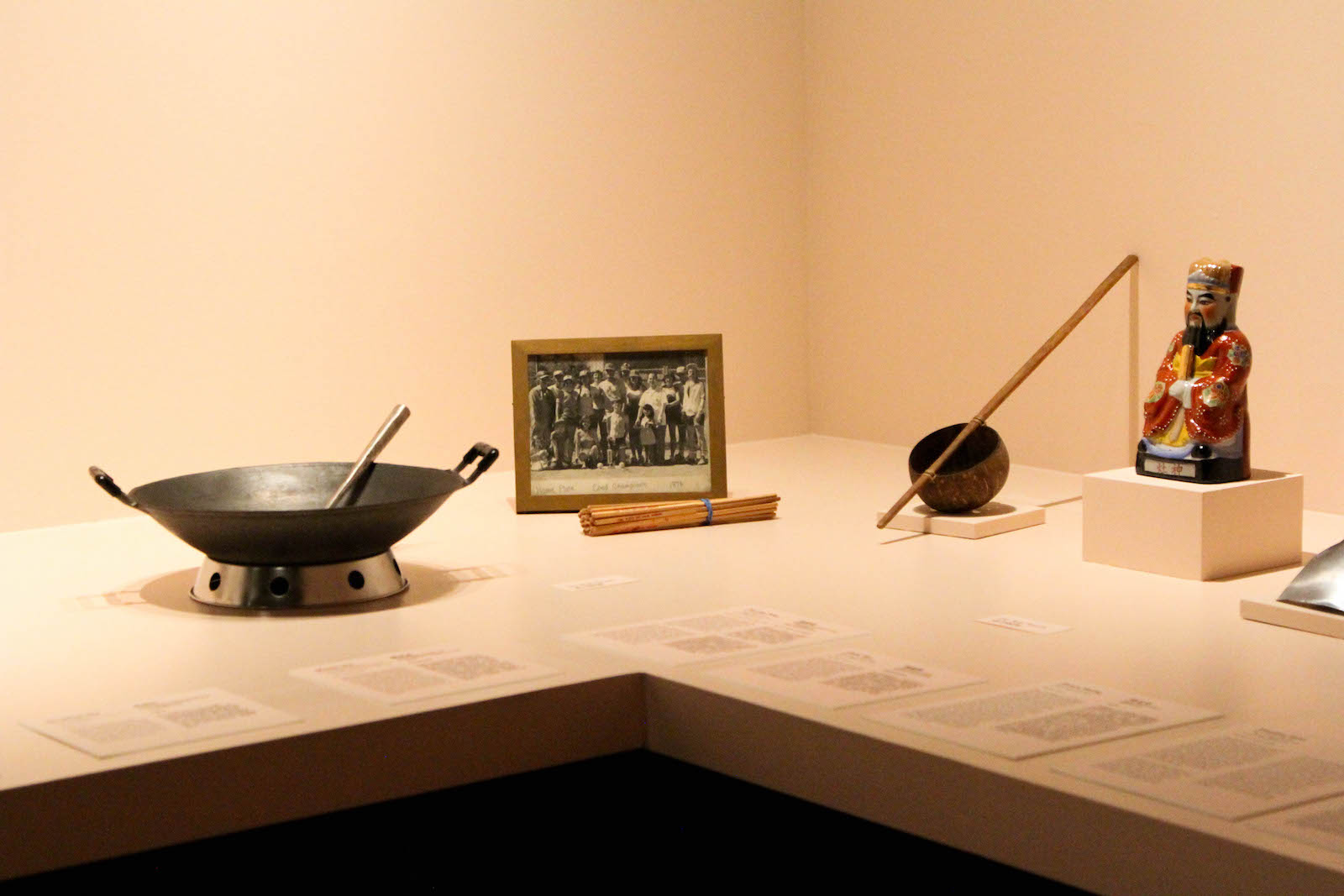 MOCA introduces viewers to the chefs working to change the perception of Chinese food in America in the 21st century. It’s a diverse group that highlights cooks throughout the United States. Jason Wang tells his story of emigrating from Shaanxi province in northern China and starting the New York chain Xi’an Famous Foods with his father to give Americans a taste of the region’s cumin and black vinegar-rich cuisine. Susanna Foo recounts her move from Taiwan to the US and her training at the Culinary Institute of America. Combine, the stories evoke demonstrate the diversity inherent in so-called Chinese food and questions the category’s validity.

MOCA does not focus on takeout restaurants, though they do offer some context for its development. When Chinese immigration began in the late nineteenth century, Americans were startled by the sudden influx and barred entry all but a few Chinese males. Needing money and craving the taste of home, these men opened restaurants where they attempted to recreate the dishes they knew growing up, albeit with American ingredients and in ways that would appease American tastes. The infamous “chop suey,” literally meaning odds and ends, combined stir fry technique with the sweet American-style sauces (think Worcestershire). Over time, these dishes evolved into things like lo mein and General Tso’s Chicken to create the hybrid cuisine that we now call Chinese-American. While this development is not the focus of the MOCA exhibit, it serves as an implicit motivation for the featured chefs to change the dialogue on their countries’ cooking. 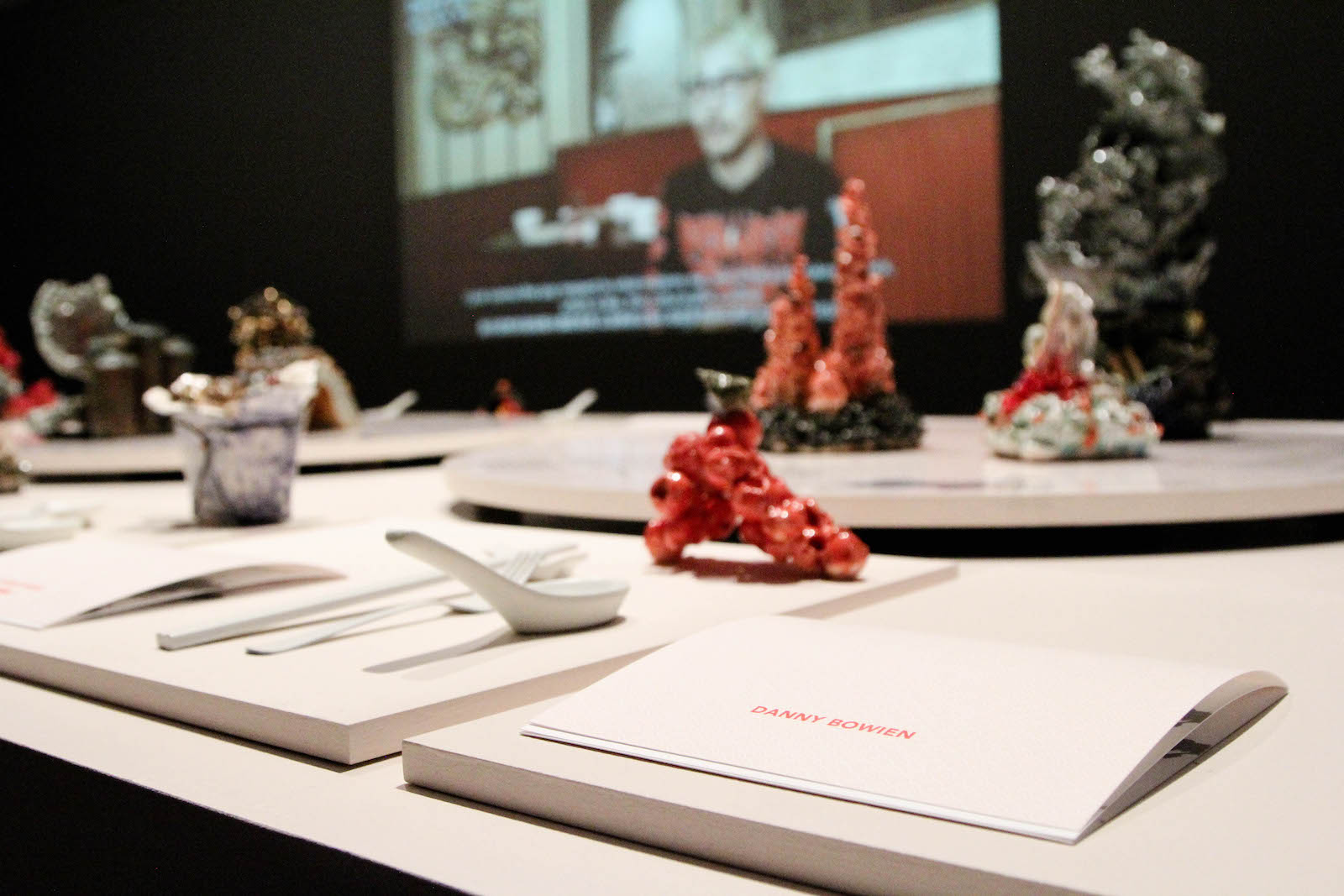 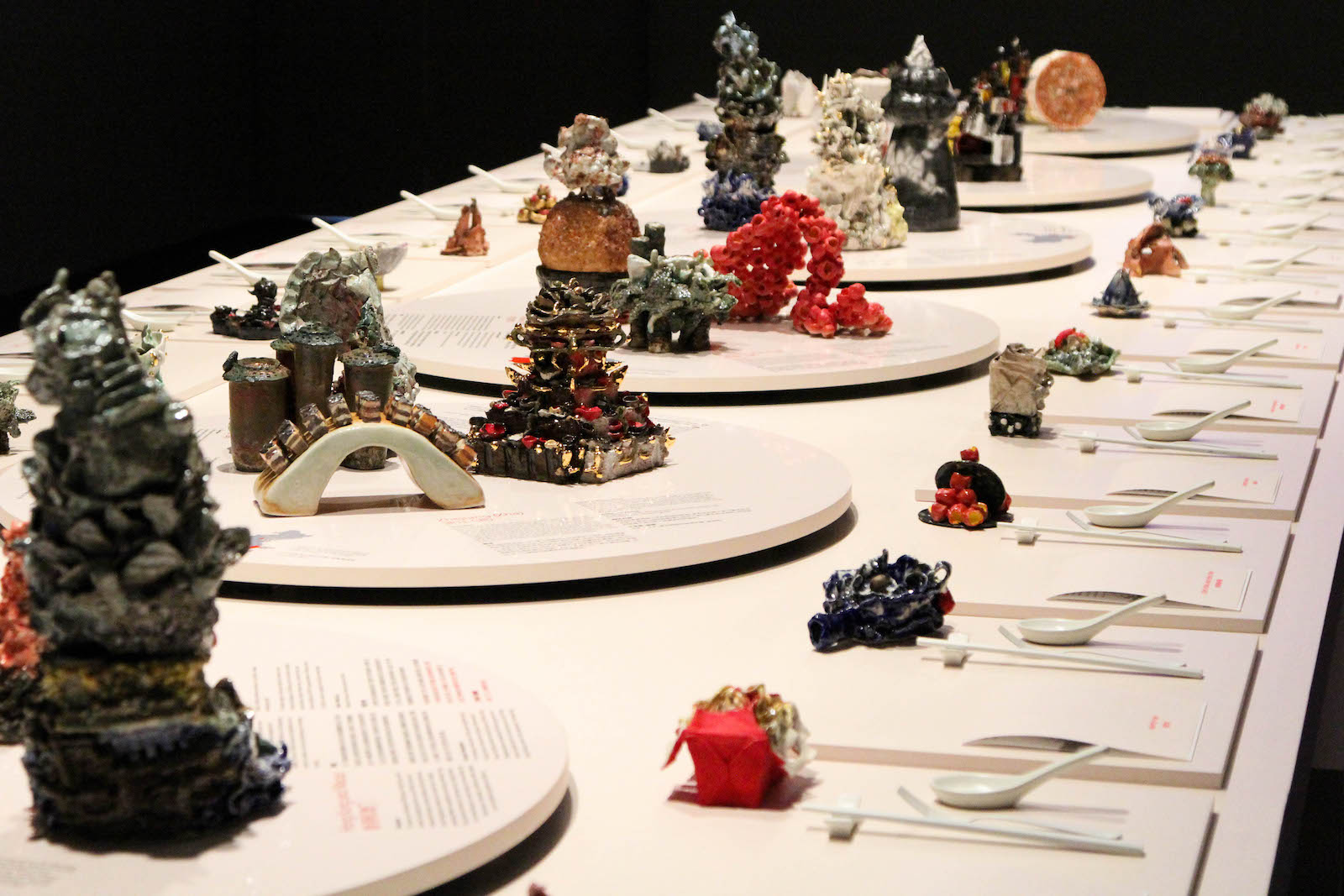 A major complaint against Americans’ understanding of Chinese food is their refusal to appreciate it as fine dining. MOCA seems to have designed the exhibit to help convince visitors that Chinese cooking can be haute cuisine. The centerpiece of the exhibit is a long table set for a banquet. Each place setting represents a different chef’s story. Lazy Susans sit in the middle of the table. They are plastered with information about China’s many regional cuisines and how they influence Chinese cooking in America. Abstract ceramics by Heidi Lau and Lu Zhang depict each regional cuisine and each chef’s blend of influences. Together, the combination of sculpture, stories and setting evoke a high-end, quasi-conceptual dining experience that seeks to reposition the visitor’s perception and expectations of Chinese food. 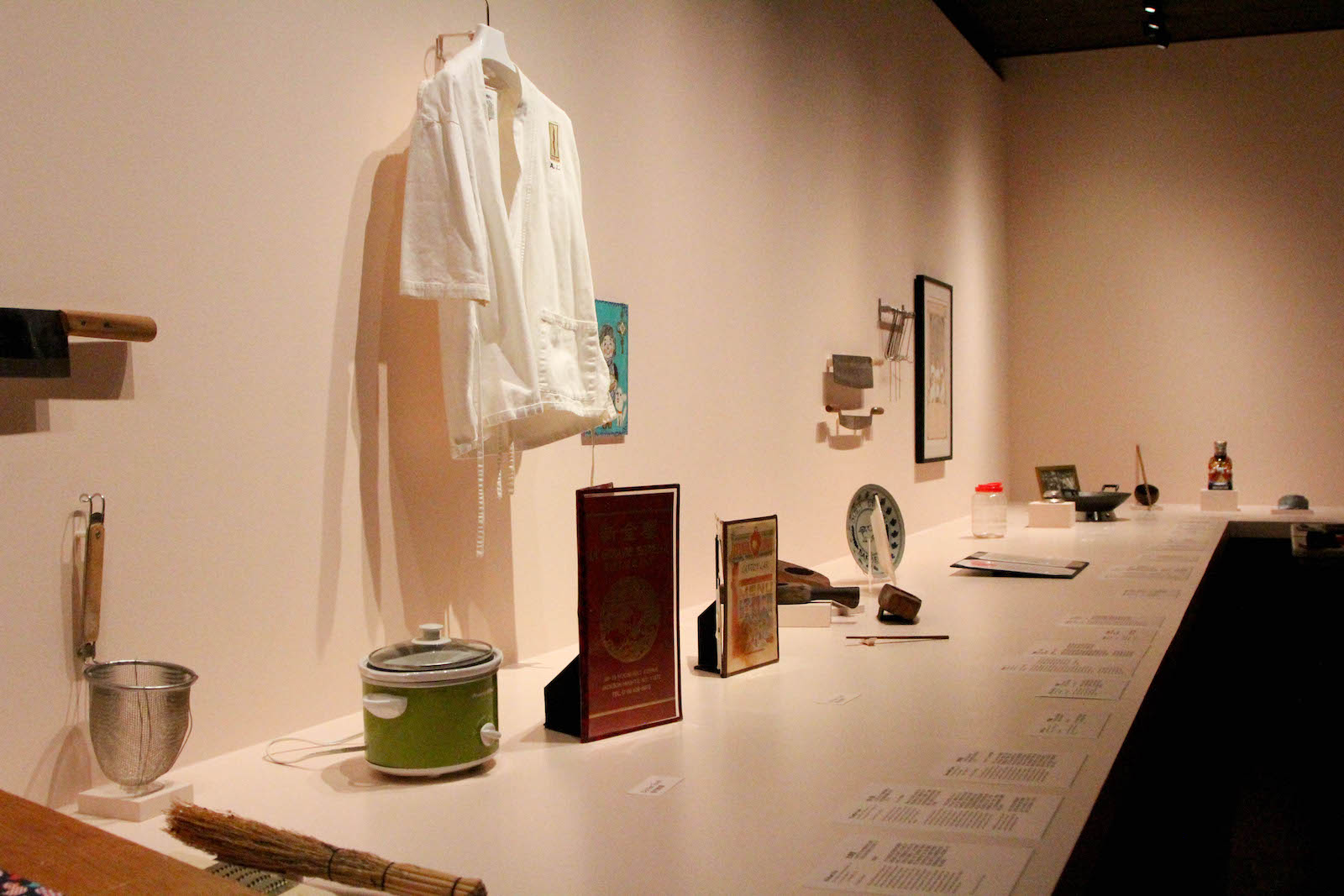 Off in a side room, artifacts offer a physical testimony to the Chinese kitchen that illustrate its differences and similarities to the Western one. There are some cleavers, mooncake molds and a kitchen god. There are noodle strainers, a wok and cookbooks. While none of the artifacts would be alien in a Western kitchen, they demonstrate how different cuisines and dishes evolve their own tools, potentially offering designers inspiration for how changing the way we cook could change the way we eat.

Ultimately, MOCA’s exhibit presents Chinese American cooking as a cuisine that deserves the same attention as society pays to French or Italian food. But while dining at an elite French restaurants may feel alienating, MOCA asserts that Chinese cooking is a highly-personal, intellectual endeavor. These chefs don’t just feed customers; they share a part of their personal history with them. When someone sits down at Mi Estrella to eat chicharrones with fried rice, they are learning about the cultural exchange that’s occurred between Chinese and Cuban immigrants in Jackson Heights. When you crack open one of Ming Tsai’s cookbooks, you’re not just copying a rote recipe, but learning how Tsai has interpreted Chinese cooking for the American home. It’s a diverse, inspiring story that deserves to be shared and in our contemporary social environment, can’t avoid having a subversive political message.

Sweet Sour Bitter Spicy is on view through September 10, 2017 at the Museum of Chinese in America, 215 Centre Street, New Yokr, NY.