Fallen Fruit, the California-based artist collective, seeks to highlight the political potency of fruit through unique, often public, art installations and curatorial efforts that focus on our collective responsibility to take care of each other. It seems there is no shortage of examples of fruit’s fraught cultural history. As early as the Biblical tale of Eve, fruit has been demonized and injected with potency for the fear of knowledge it might hold. And more recently, the director Wes Anderson chose to make “Boy with Apple,” a controversial and sacred painting, one of the narrative drivers of The Grand Budapest Hotel. In John Milton’s Paradise Lost, Eve’s expulsion from The Garden of Eden is likened to the digestive process. Her inquisitive interest in nature, something inherent to her environment, causes her to be reprimanded. 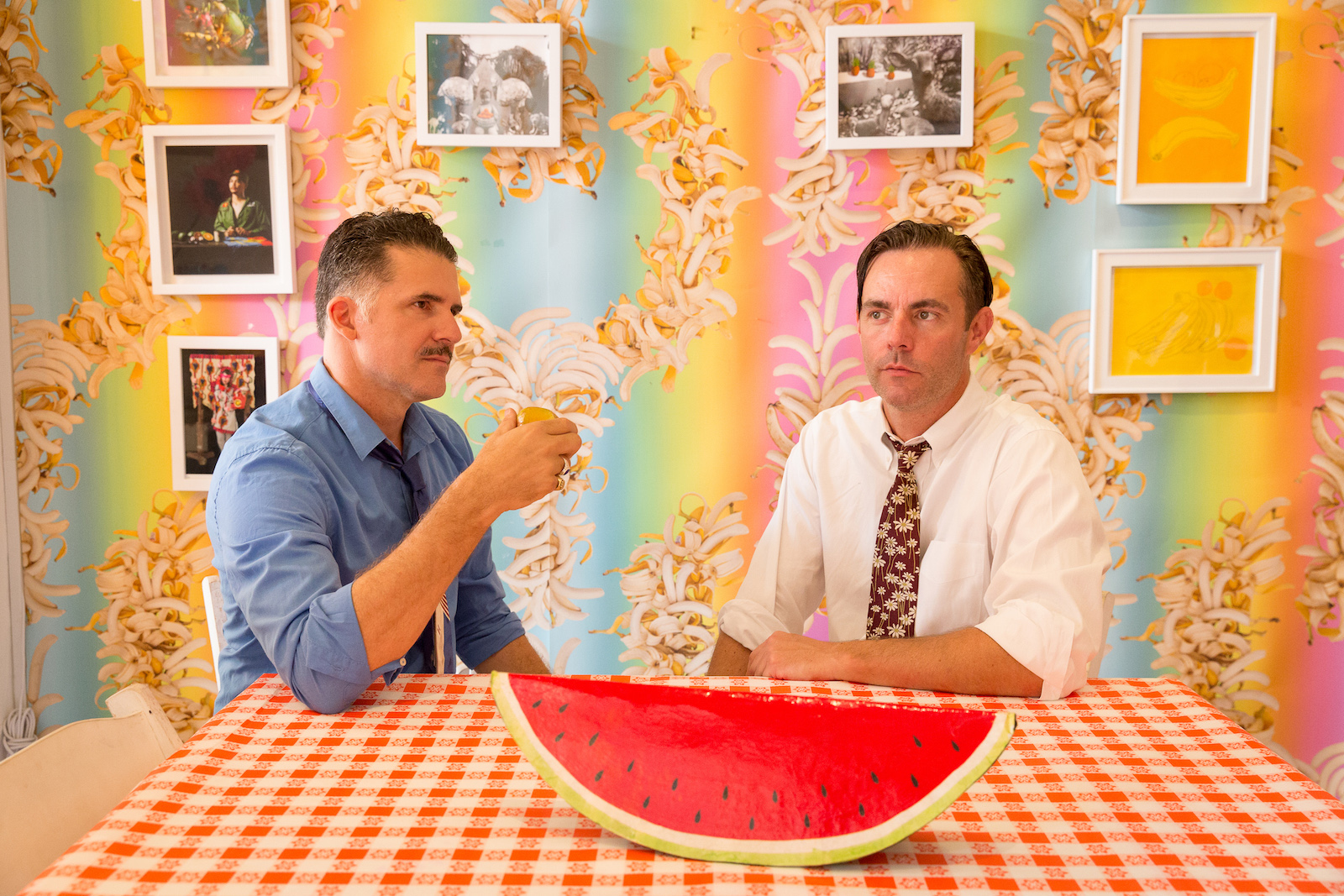 Founded in 2004, Fallen Fruit has disseminated fructose highs as a form of artistic activism. The artist duo David Burns, a professor at California College of the Arts in San Francisco, and Austin Young, a photographer interested in identity and gender politics, continue their collaborative interventions in an effort to make fruit no longer forbidden. The name Fallen Fruit comes from an old Roman law: “to not reap your fields to the edges, but leave the fallen fruit for the stranger or passerby.” By situating their public projects within the realm of “art,” they’ve found they are able to include a broader swath of people in their efforts. “Our world holistically is both strong and fragile. As artists and culture-makers it is imperative to stand strong and make the world you believe a fruitful and sharing place for everyone to enjoy,” Young says.

So what does freeing fruit’s history actually look like for these artists? What began with a simple project of mapping fruit trees between the distance of their own homes (and distribution of their hand-drawn cartographic explorations), has led to “fruit jam” sessions—a project intended to build community, through, you guessed it, jam-making. Their fruit tree adoption programs not only enable a tangible relationship to artistic practice but also invite community members to engage and care for trees in their neighborhood. The collective has even produced public art fruit wallpapers designed around which fruits are found in particular markets traveled to. 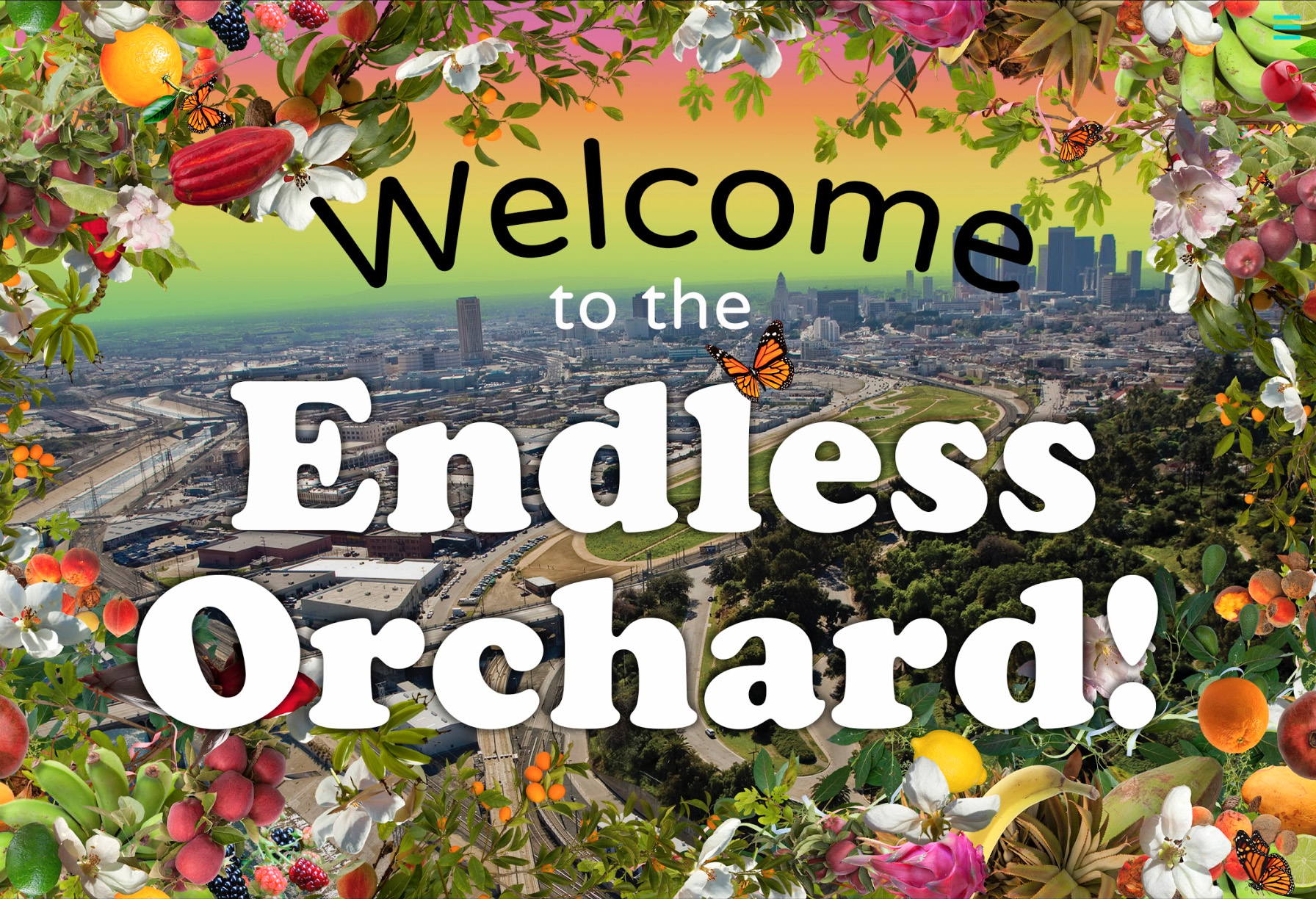 In more recent years, Fallen Fruit has worked collaboratively with museums, galleries and public spaces. At Proof on Main, a restaurant in Louisville, Kentucky, the duo sieved through the town’s archives to create a salon-style gallery. The purpose was to create a sketch of the city and its complicated relationship with agriculture, slavery and local mormonism in its objects. According to Young, “[Louisville] was the origins of the phrase “sold down river here” referencing slavery moving to the South. It was also the last stop before the promise of freedom on the underground railroad (across the Ohio River is the Union North), and the place where pioneers started their journey bringing fruit and culture to the West—and displacing Native cultures along the way.” 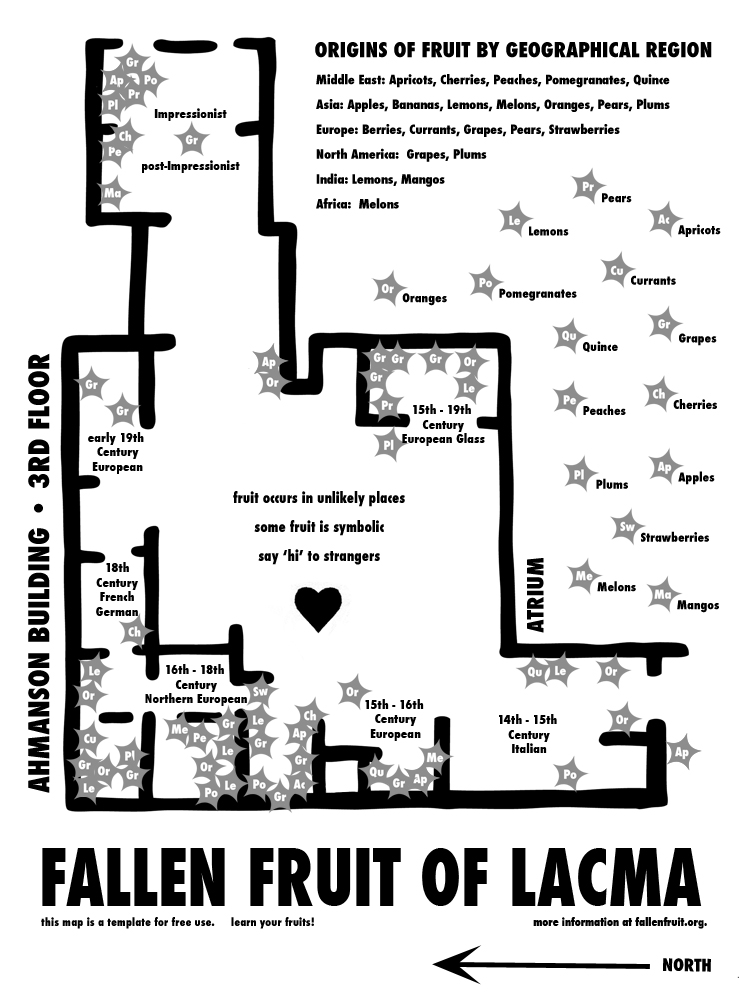 Then there was the year-long residency for EatLACMA, during which they invited other artists to create related fruit programming: from a tomato squishing performance to watermelon eating contests and an edible roof garden. “Long ago we started to explore what we call the ‘Colonial History of Fruit’ and pay attention to how hundreds of years ago fruit traveled around the world because of imperialism and (mostly) European migration. Of course, much of this is attached to histories against humanity, displacement of cultures, genocide and slavery,” explained Young. “The history of fruit is our collective history—it is a world history and full of celebrations and rituals as well as a darkness in the histories of humanity.” The duo has even been asked to travel the world to plant fruit trees, particularly in politically volatile geographies such as the U.S.-Mexico border in Tijuana, nurturing camaraderie with other countries through the nurturing of the plants. 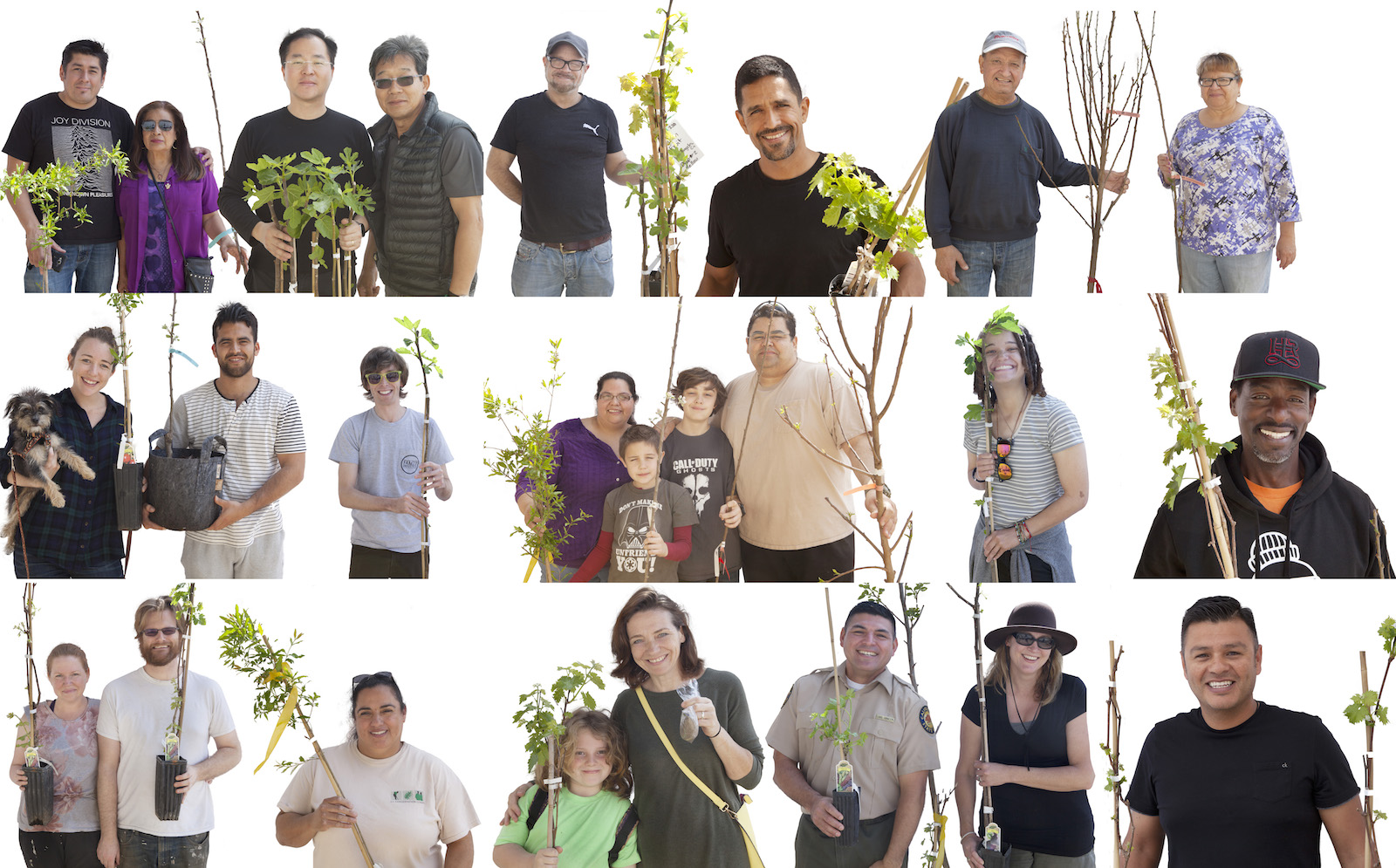 The sensitivity of each project brings joy—each is imbued with their own kitschy aesthetic and an aptitude for the regions in which they work. The choice of a specific type of tree adds to a community’s conversation around its own history. But it is hard to call Burns and Young purely artists—their projects are at as much artistic expressions as they are endeavors in creative city planning and sociology. What can olive trees tell us about Athens? Peaches about Atlanta? For one, that fruit trees are an incredibly giving medium to work with: “The idea of ‘the gift’ is important to us…Everyone’s an expert on the taste of a strawberry. The richest and poorest people in the world eat the same banana (genetically identical) everyday. Fruit is one of the most unifying and ubiquitous things in the world,” Young says. 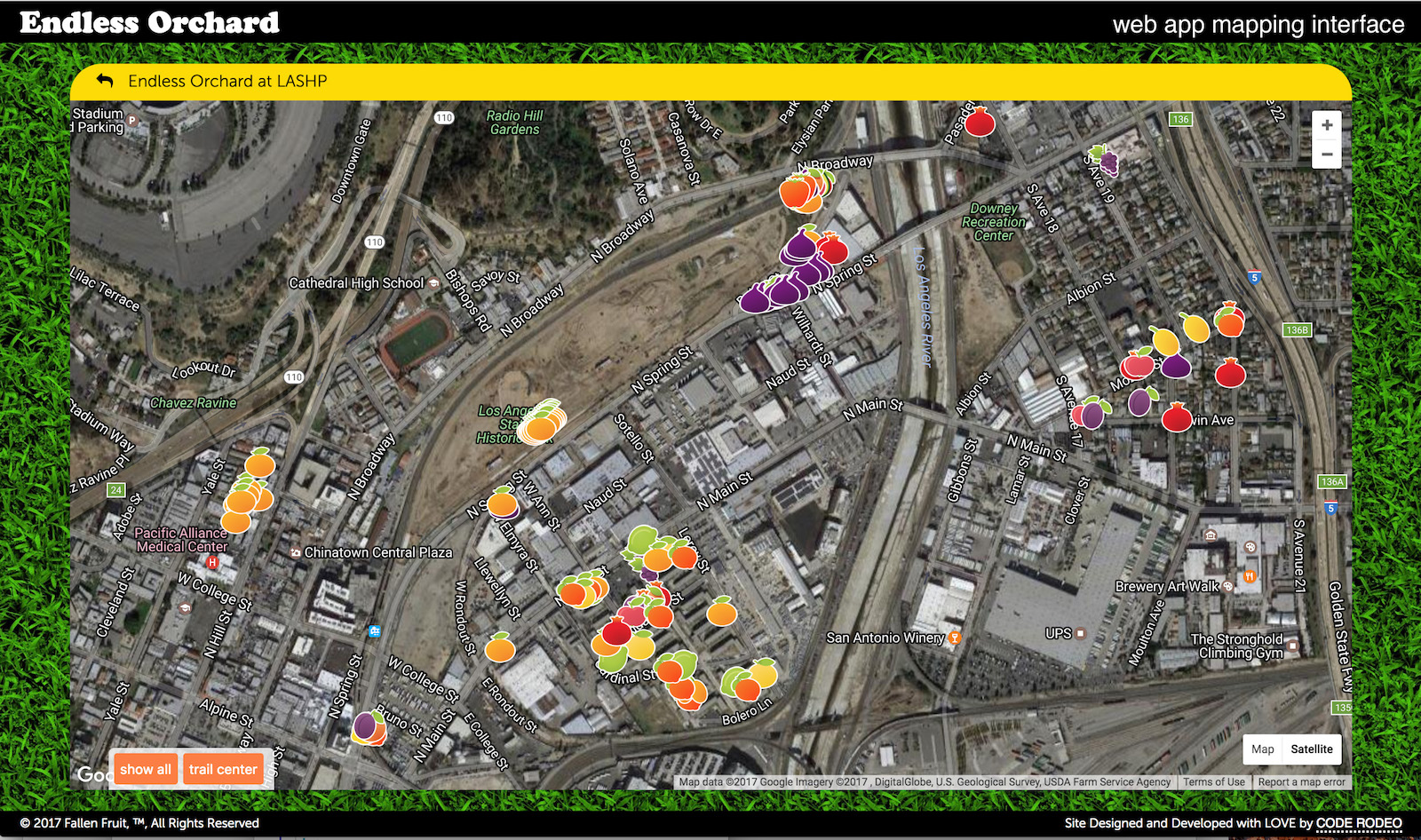 This weekend on Earth Day, April 22nd, the duo reveals what might be their biggest gift to the public yet: the Endless Orchard app, which is slated to be the largest public artwork in the world. Given that many cities in the United States do not allow fruit trees in their parks, the app advocates for fruit as a resource for all, corroborating civic duty with the global footprint of fruit. As the artists explain on the site, “Endless Orchard is a living public artwork that anyone can eat from…a real living fruit orchard planted by the public, for the public.” 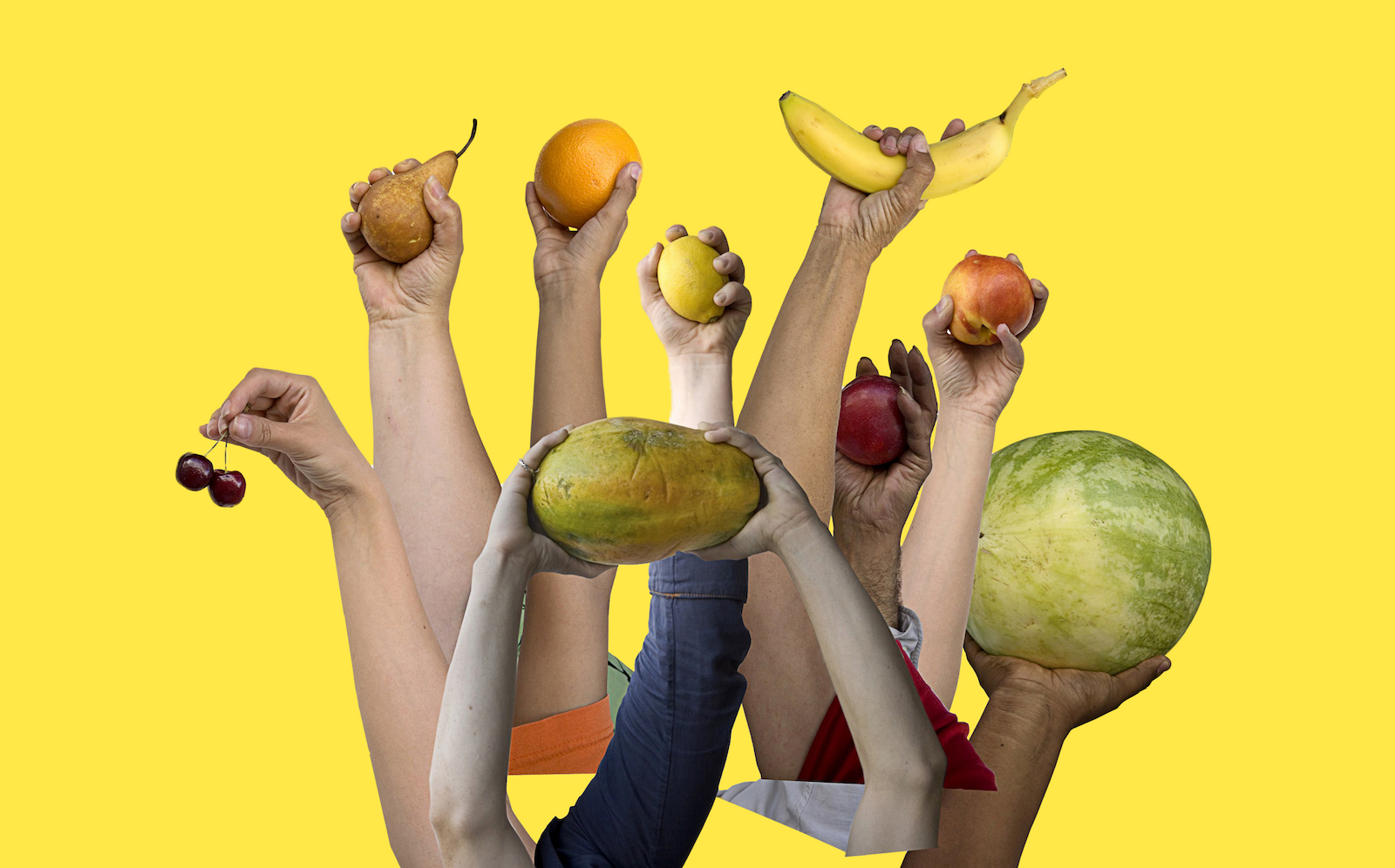 In addition to the launch of the app, “Monument for Sharing,” Fallen Fruit’s newest site-specific installation also opens to the public this weekend. Inspired by the Statute of Liberty, the installation uses recordings of conversations with residents of Los Angeles to create poetry that will revolve around 32 new orange trees being planted in Los Angeles State Historic Park. “We share without expecting anything in return,” Young says of Fallen Fruit, and this new work is no exception. Its debut coincides with the opening of the LA State Historic Park itself, a triumph of civics in action, eight years in the making. After community groups organized protests against a pending industrial development, the State Parks bought the parcel and transformed the space into a public park with plans to serve as a native wetland habitat connecting the Los Angeles River. At the Grand Opening Fallen Fruit will be unveiling their “Monument,” launching the Endless Orchard app and conduct Fruit Map bandana dyeing workshops.