Following Caesarstone’s collaboration with the food design studio Arabeschi di Latte and Tom Dixon during Milan Design Week 2016, the kitchen surface manufacturer has released a new “cookbook” of sorts, A Material Menu: Designs for the Culinary Aesthetic. A collection of eight recipes inspired by the four elements embodied in Caesarstone’s quartz surfaces, A Material Menu is an exercise in food styling and a vehicle for revealing what Francesca Sarti, principle of Arabeschi di Latte calls, “the fundamental relationship between the natural surfaces and food.” 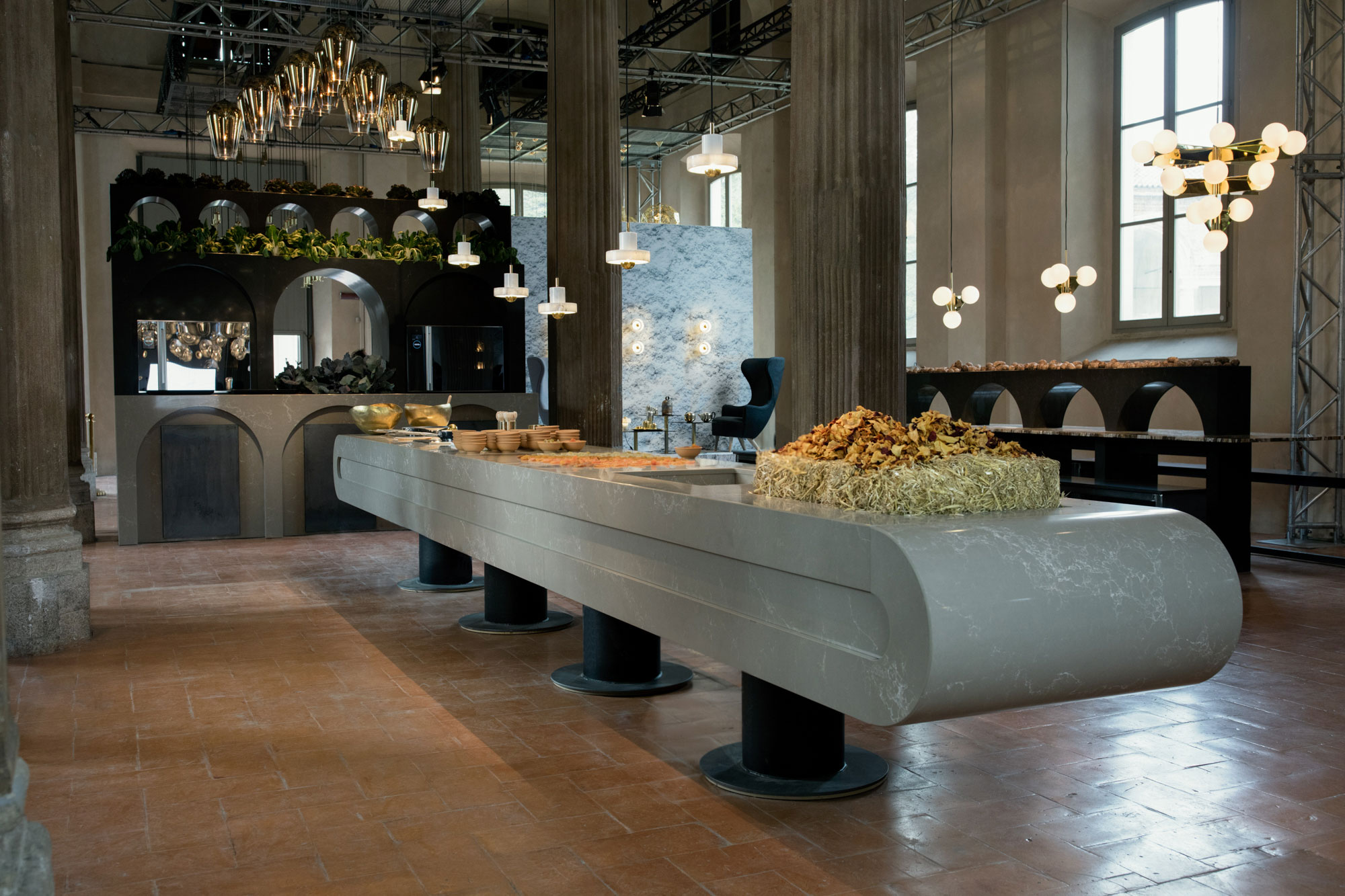 At “The Restaurant by Caesarstone and Tom Dixon” during 2016’s Milan Design Week, Arabeschi di Latte created a bespoke installation of four kitchens inspired by the four elements—Earth, Fire, Air and Ice. In this iteration, the book, designed by Micha Weidmann Studio, collects the concepts of the presentation in a large format artifact with photographs by London-based Tom Mannion and food styling by Sarti.

This isn’t the first time Arabeschi di Latte has worked with the kitchen space. The studio was founded in 2001 and has been a pioneer in using food as a language for exploring questions of design. In 2013 the Italian food design studio created a special installation for the kitchen manufacturer Boffi during London Design Festival and collaborated with Tom Dixon for their “Multiplex” concept during London Design Festival 2015 offering a “tri-dimensional” pantry promising massive blocks of chocolate and charcoal baking powder and an installation in all shades of black foods (coffee included). 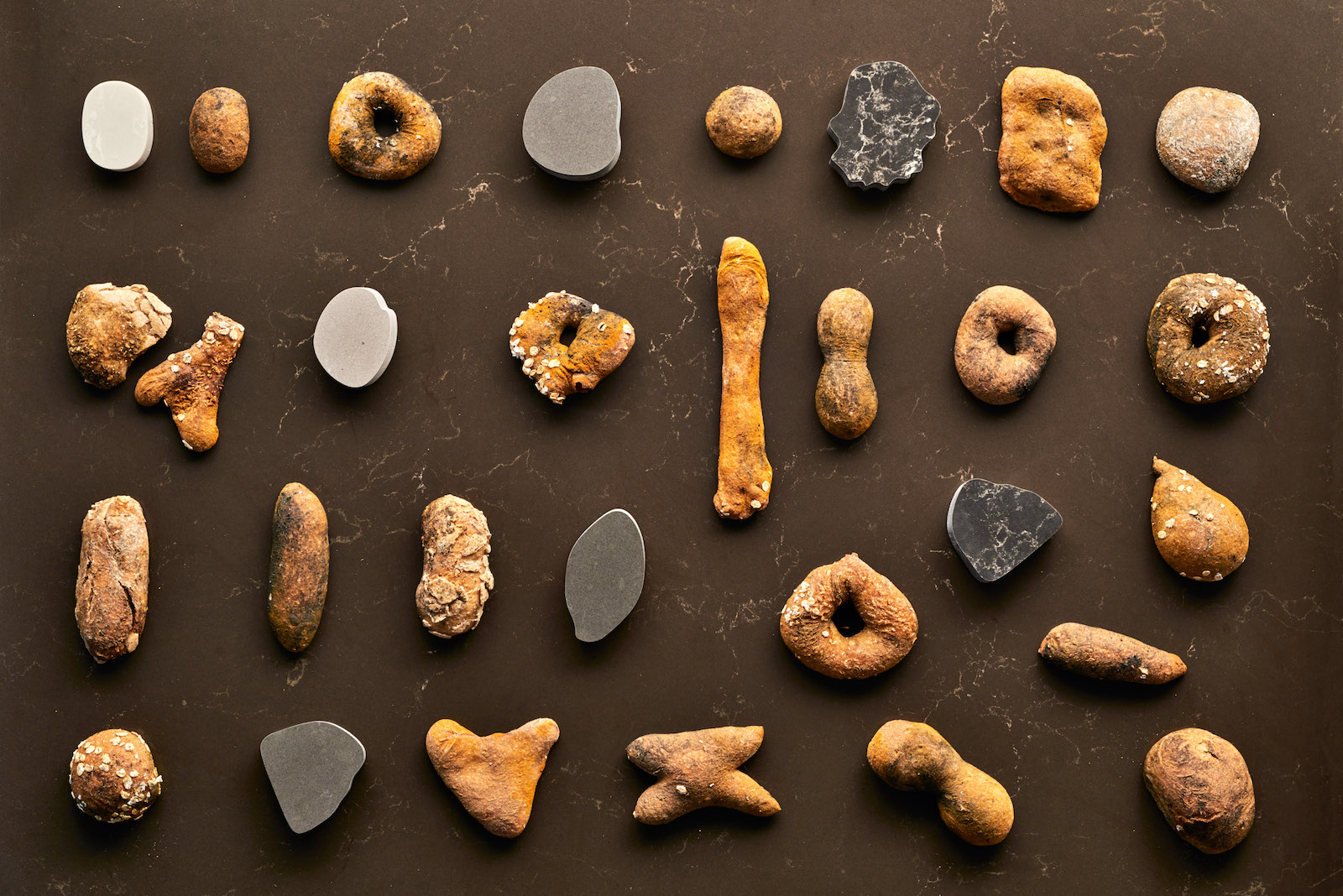 The warm tonality of Earth is accompanied with a recipe for Stone Sandwiches. These treats emerged from “musing on the idea of mudlarking and truffle hunting, seeking out treasures from the ground,” Sarti explains. Sourdough bread dotted with licorice or coffee powder is filled with earth-y black chanterelles dressed with garlic, olive oil, thyme and pickled walnuts. The use of black chanterelle mushrooms comes from their striking color and their symbiotic relationship with trees nourished by chalky or sandy earth. 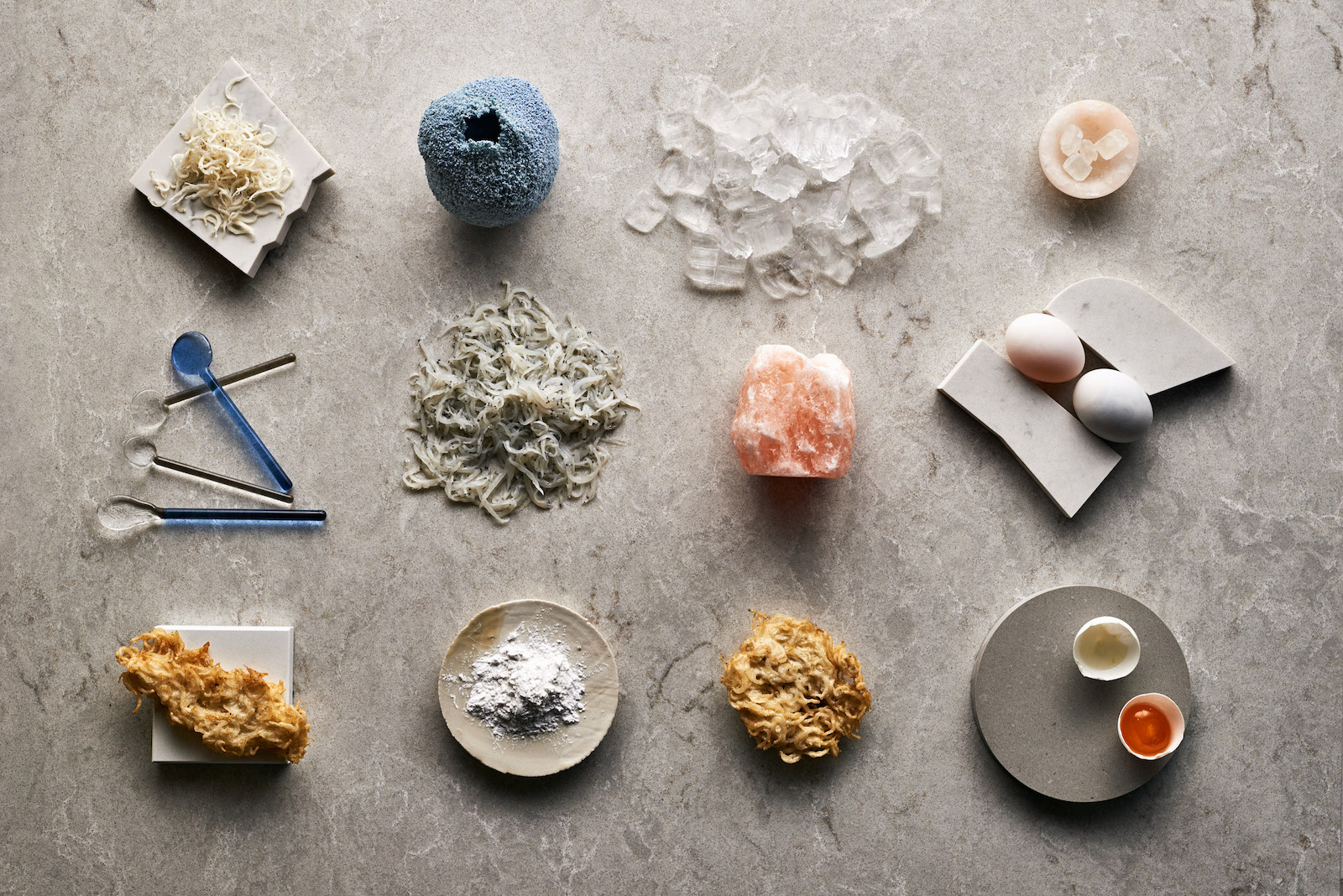 Ice is explored in combination with saltwater and the bounty of the ocean. With 96% of the water on earth, including ice and clouds, containing saline, a glass of refreshing Salty Lemonade “pays homage to this partnership.” Icefish, a marine delicacy from southeast Asia, is combined with seaweed, two ingredients that depend on our vast oceans for survival. A nice twist on codfish fritters or saltfish fritters popular in coastal communities from Portugal to the Caribbean, icefish can be eaten whole. 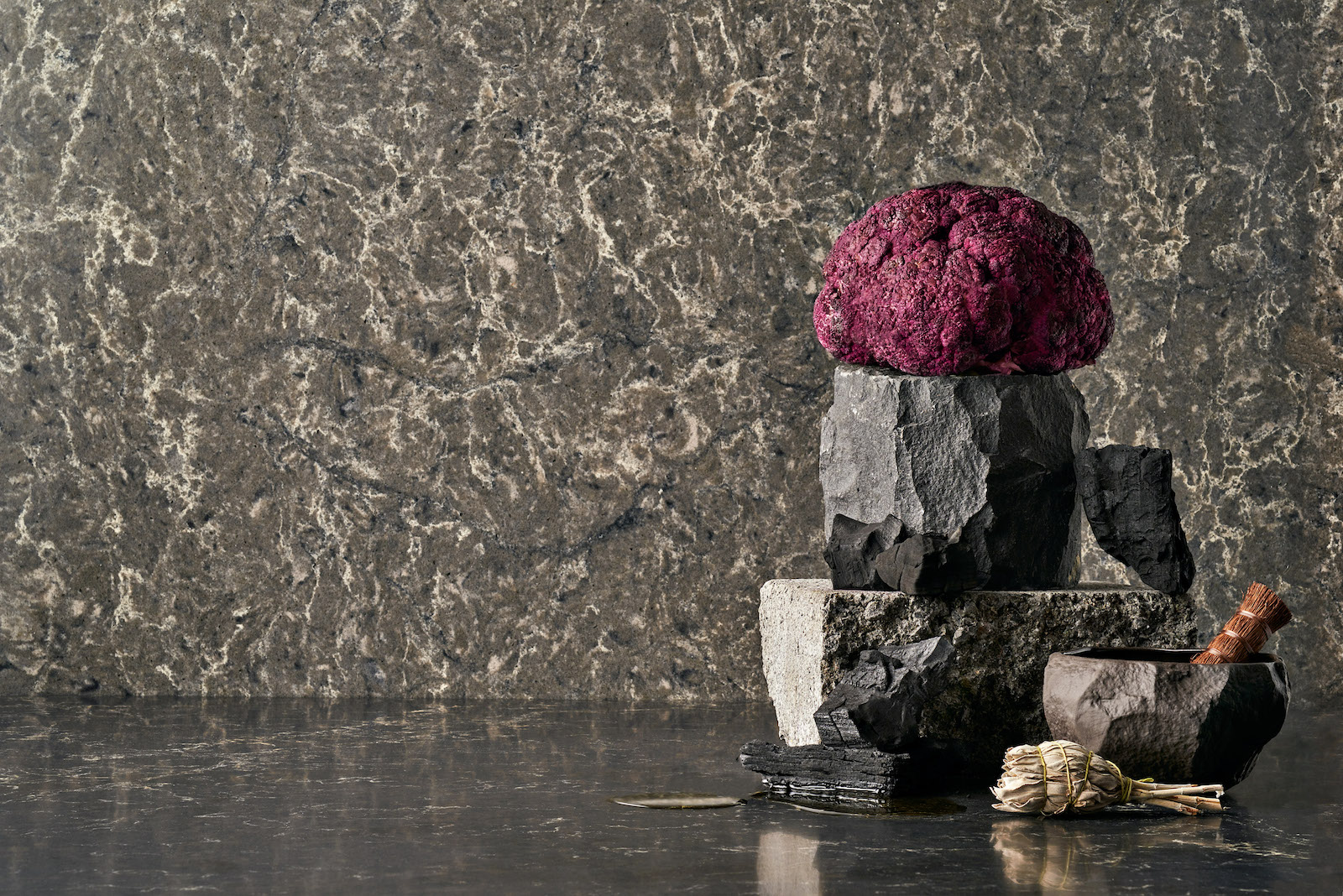 Fire is one of the most ancient of cooking techniques, “mystically transforming many unpalatable foods into highly delicious treats,” Sarti writes. A simple roast cauliflower smoked with sage harkens to the mysticism of smudging—a purification ritual where dry sage is burned. Sarti also points out that, “sage, when burned, is also believed to impart spiritual wisdom and clarity which is why we refer to wise people as ‘sage’.” The Dark Trophy cauliflower requires access to an open fire and a roasting pit (or for us city-dwellers, we can do it in an oven). 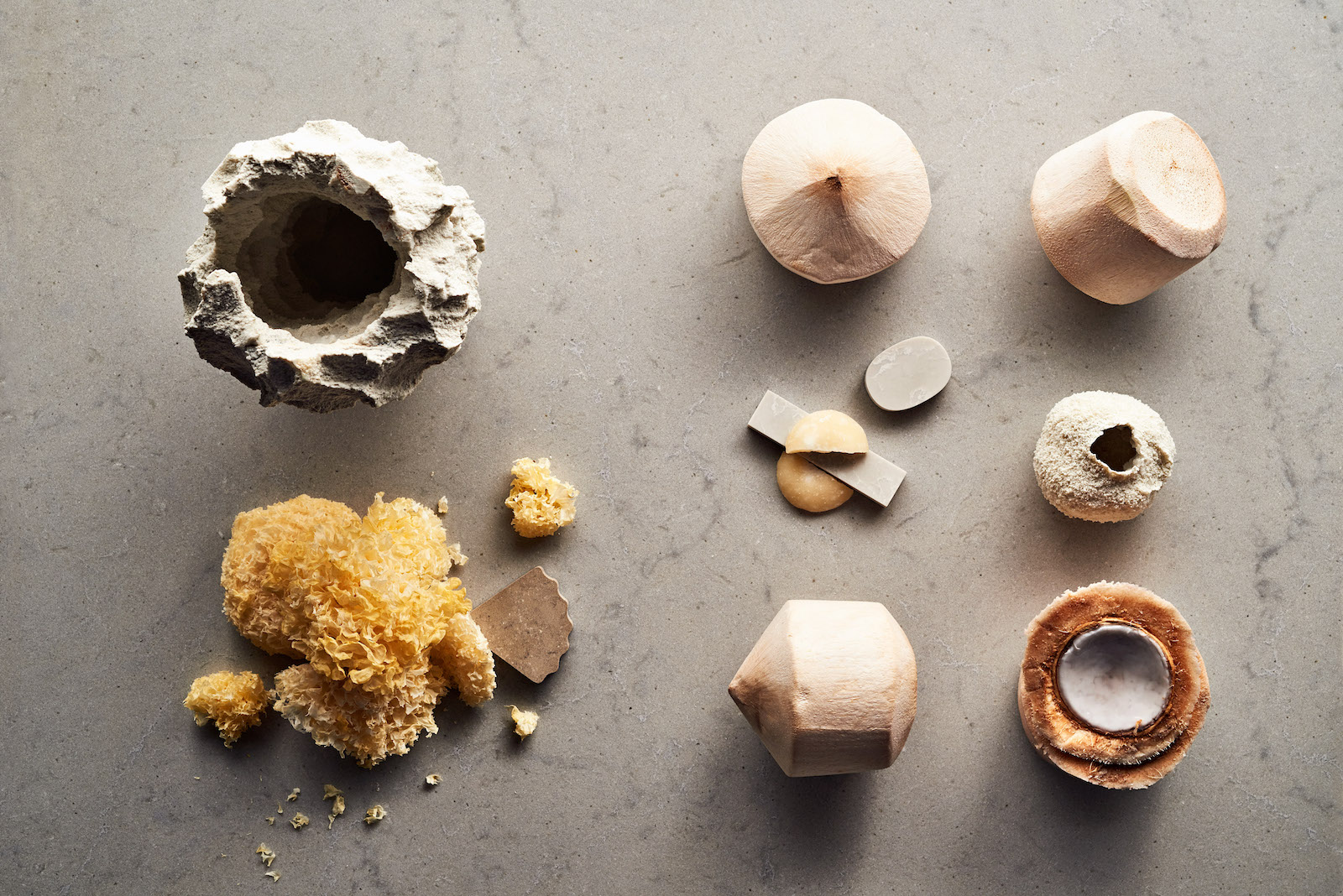 An Egg Tower seems like a great way to challenge gravity and celebrate the lightness of Air in cooking. An “edifice of torrone and meringue made of raw, cooked and frozen egg whites, constructed using eggs from different birds,” this confection has the thrilling element of dessert Jenga with an ostrich egg and a boozy side of Marsala Wine. The Snow Soup (above) uses a classic Chinese ingredient of white tree fungus spooned from a coconut shell in an air-y dessert soup inspired by the flavors of Asia.

Learn more about A Material Menu at Caesarstone: menu.caesarstone.com