It’s rare to have an opportunity to meet someone and immediately learn everything about them. Copenhagen-based food design duo I’m a Kombo’s recent publication, “The Social Act of Dining.” is a thorough introduction to the studio’s food-based interventions, philosophy and history neatly packaged as a roving conversation between the principals Bo Lindegaard and Lasse Askov. 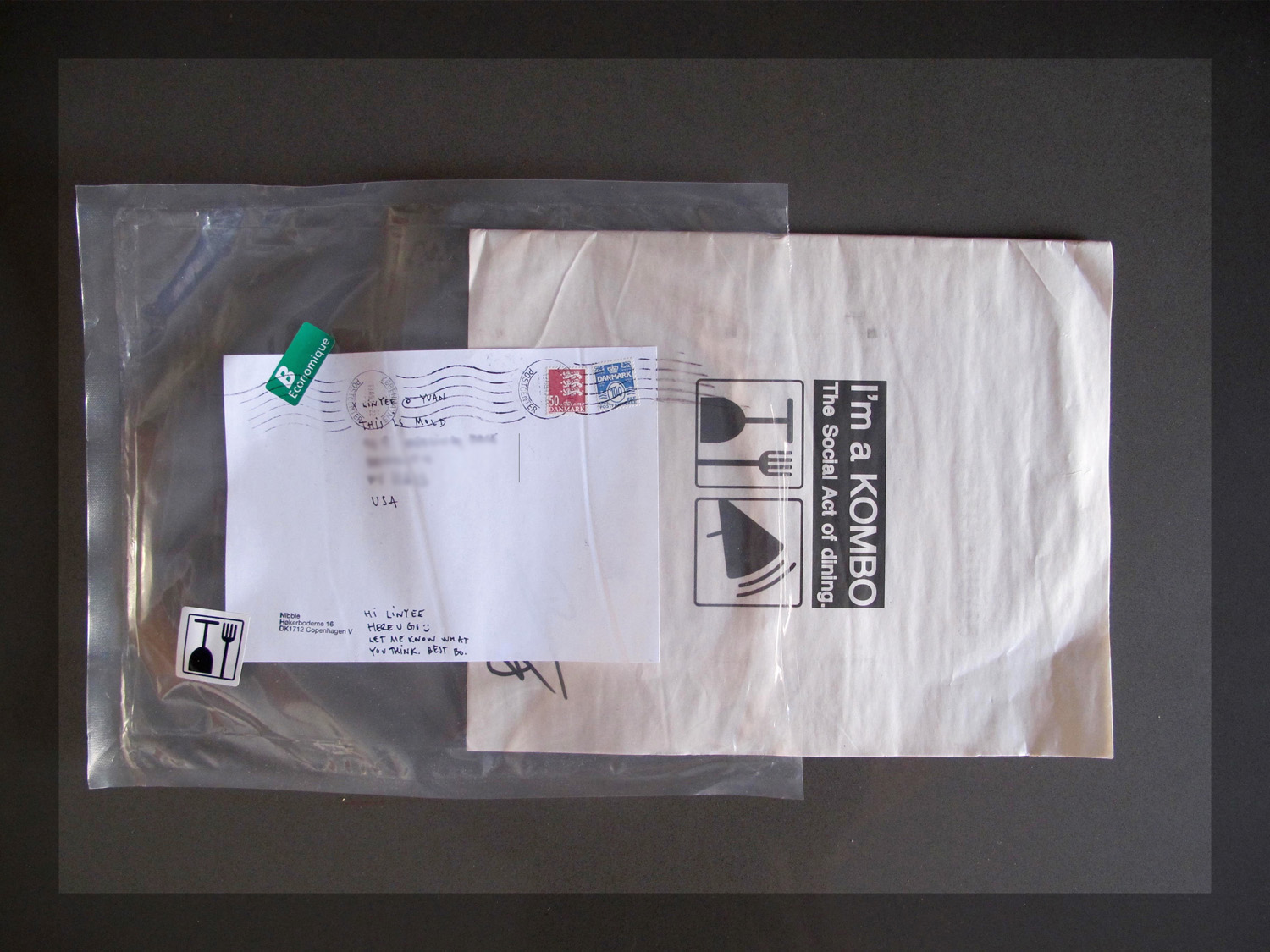 Published for Thinking Food Design’s exhibition for Paris Design Week, I’m a Kombo takes the publication’s title from their ongoing collaborative series, The Social Act, that invites diners to not only eat a meal but to participate in it’s construction and evolution. The publication reads like a manifesto and the studio itself calls it “a meal-manual anticipating a new way of sharing and consuming food…a meal-theory defining relevant values and courses for the meal to be a common experience.”

The Social Act #12 by I'm a KOMBO from Bo Lindegaard on Vimeo.

The Social Act is a fitting entrypoint into the work of I’m a Kombo—an experiential meal that aims to surprise and delight, upend expectations without sacrificing taste, but most importantly, underpinned by a deep philosophy around the importance of using food as a provocation. In the opening pages of the manifesto, they explain their unusual name: “We didn’t really give a shit. One didn’t have a shit and the other thought he was the shit. The Cooking Academy was a crazy place. It was like Grand Theft Auto without the fast cars…Maybe it was an unconscious revolutionary act to break free which twisted our mindset—a hope not to change the world but at least to pave another way for upcoming generations of chefs.” 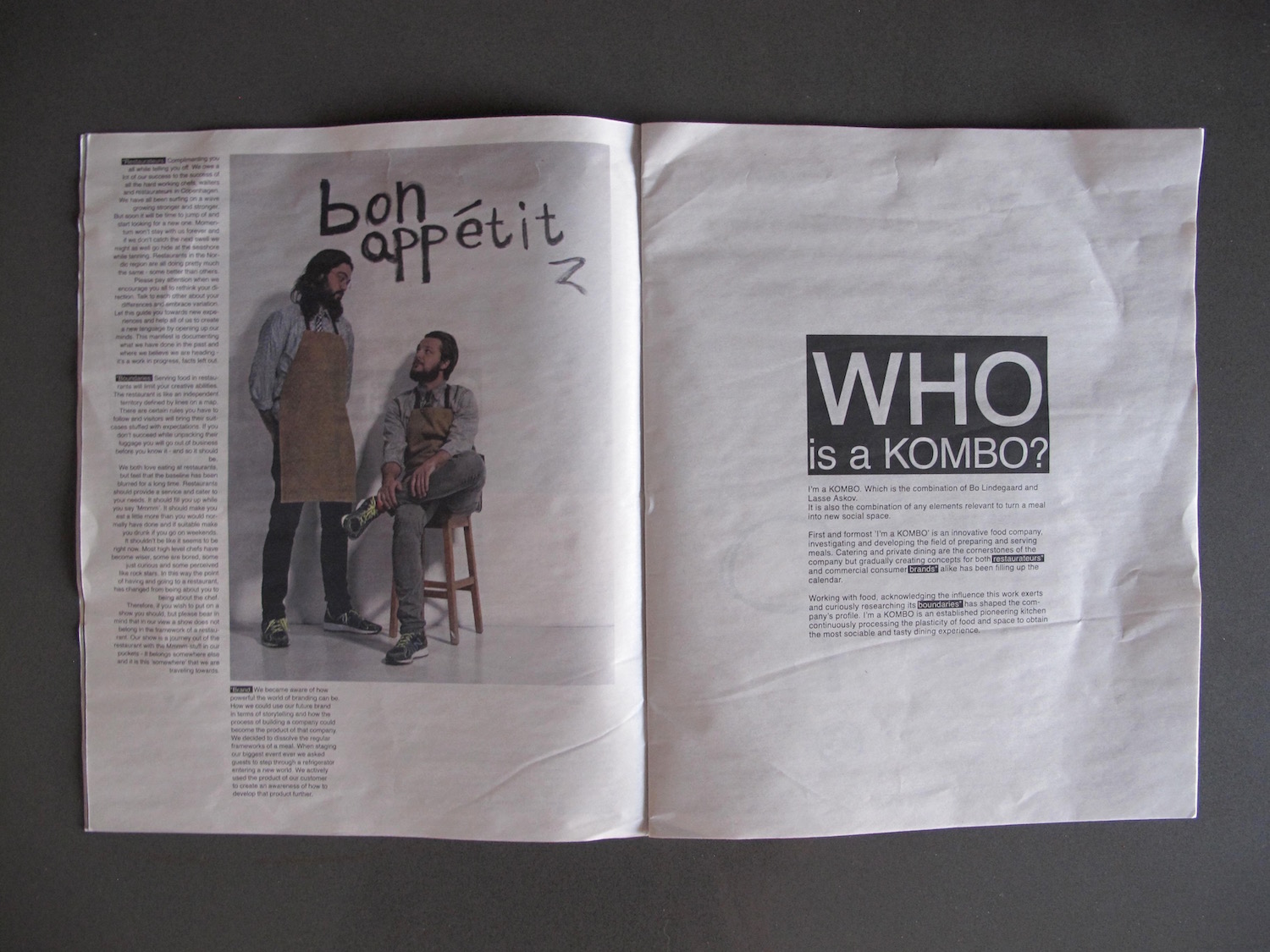 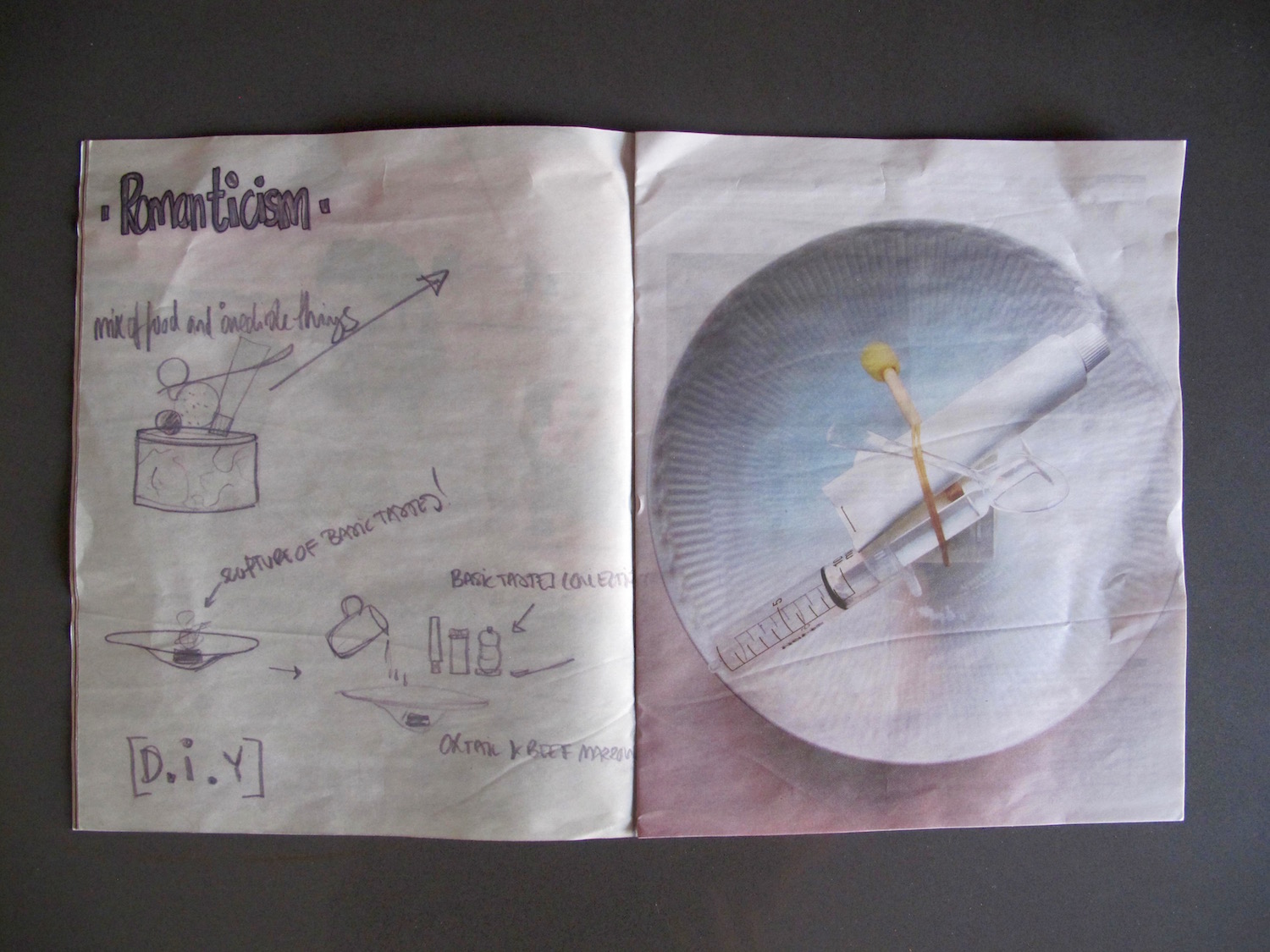 The duo met at the Cooking Academy and reconnected years later when they were both working professionally. In 2009, they began to collaborate on site-specific pop-up events that focused on, “the idea of breaking boundaries and frameworks of the meal,” explains Lindegaard. From dining in retail windows to licking off edible grass from a wall to mimic the simplicity of animals feeding, I’m a Kombo developed a reputation for producing unconventional dining experiences that challenged diners to consider larger ideas beyond just the plating or taste of the meal.

Soon, the duo realized they needed to have a physical space, “there was a flip side to the pop-ups…accumulating no cash but tons of work and tons of expectations,” Lindegaard shares, so they set up offices in Copenhagen’s meatpacking district where they began to host pop-up dinners from a single location. The Social Act became a flexible platform for the workshop to present new ideas. “We would consider it a continuous technical investigation of taste, structure and composition combined with an ongoing change of scenery.” 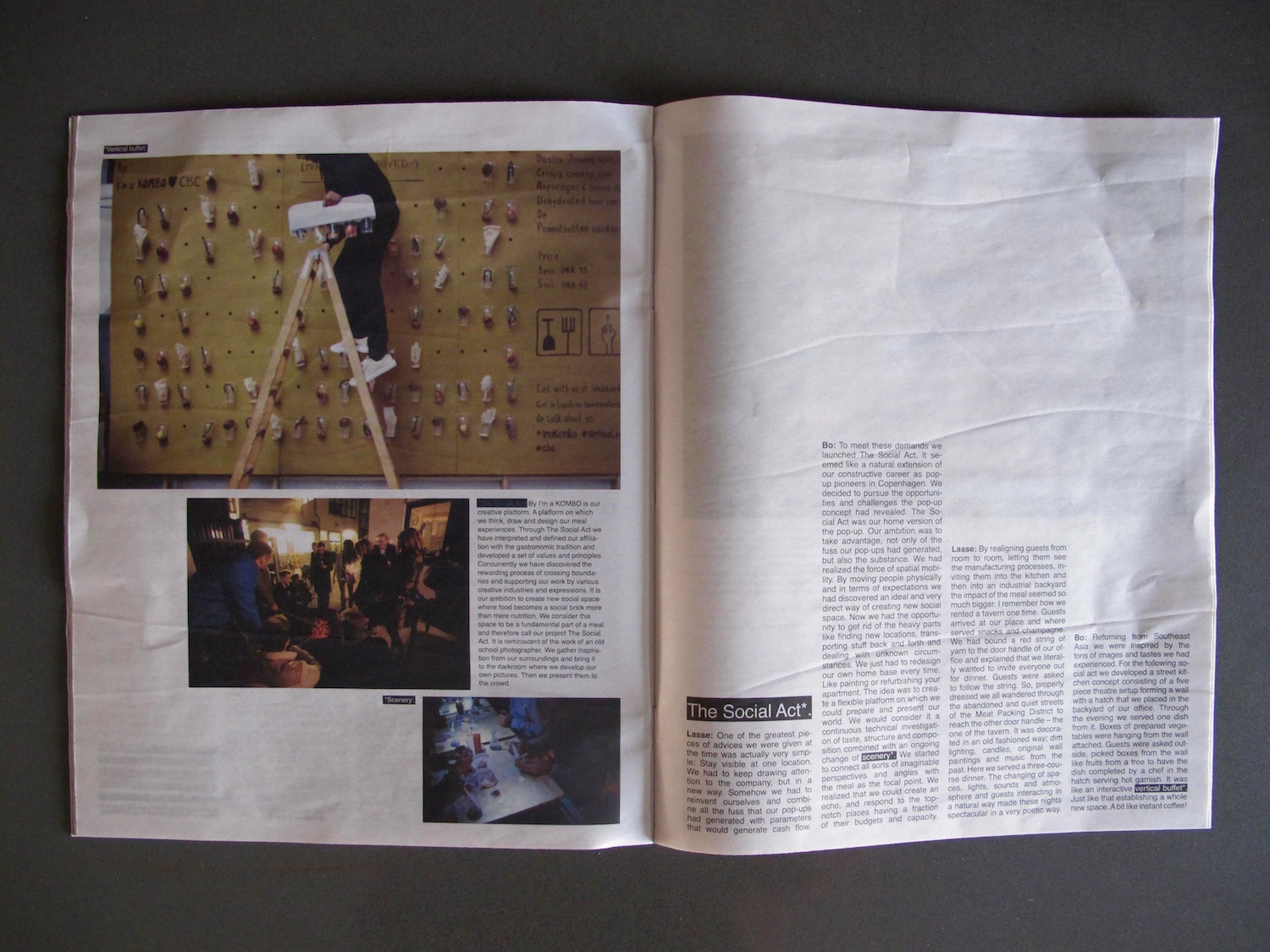 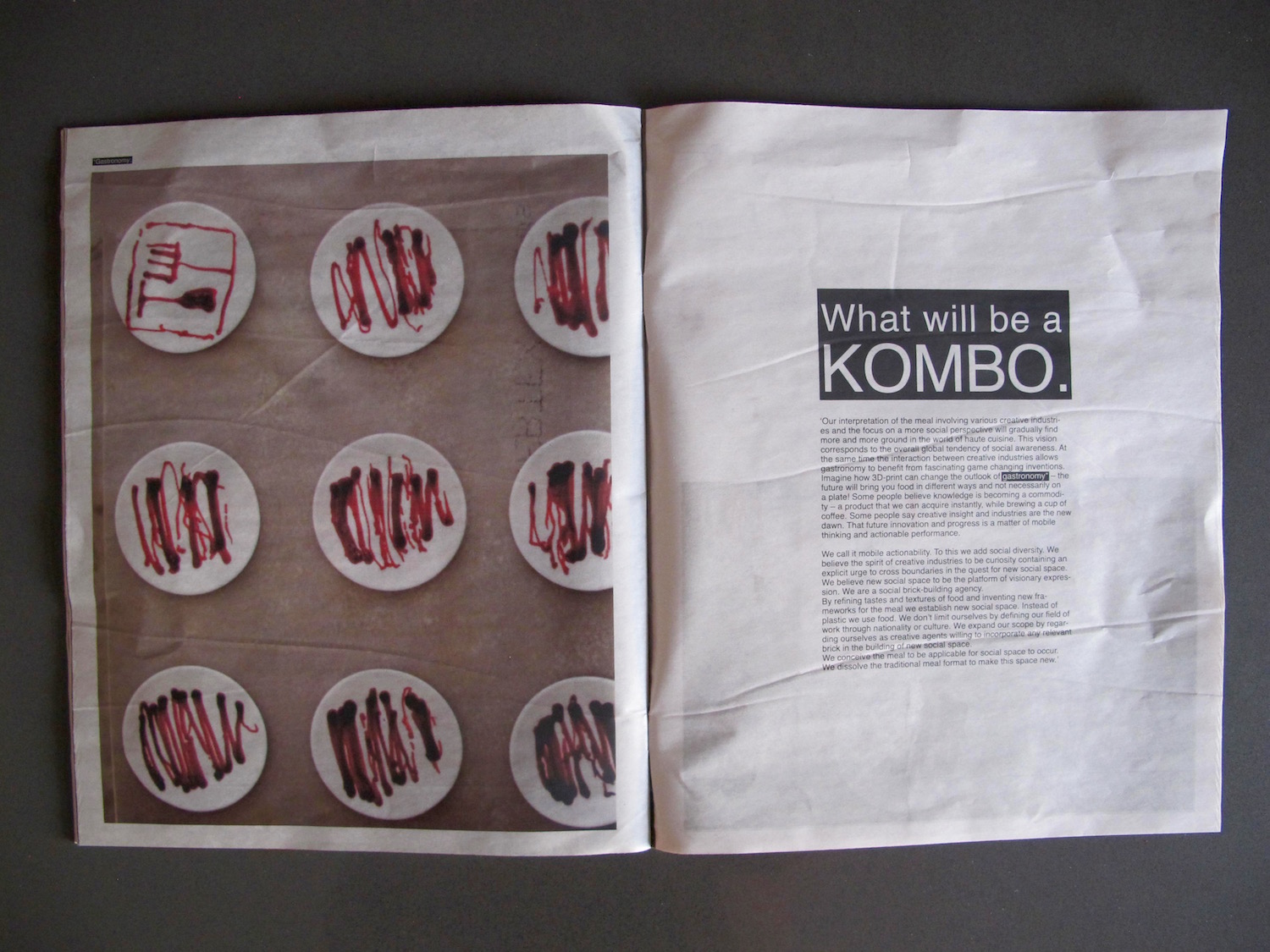 In 2013, I’m a Kombo opened Nibble, a magazine stand selling food zines, that serves as a storefront for their studio. It is also the location for hosting ongoing events for The Social Act. At the top of 2016, the team is opening a coffee shop and celebrating with The Social Act #14. As technological innovations in the kitchen allude to new ways of interacting and preparing meals, I’m a Kombo is staking their bets on the continued importance of the meal as a social space. “We believe the spirit of creative industries to be curiosity containing an explicit urge to cross boundaries in the quest for new social space.”

The Social Act #14, celebrating the launch of the coffee shop, begins February 24th through March 5th at I’m a KOMBO i Høkerboderne 16, 1712 Kbh V. Tickets are now available here.