Design and Food was originally published on the design critic Alice Rawsthorn’s Instagram account and republished here with her permission. Read more of her design writing structured into weekly, single-subject explorations @alice.rawsthorn. 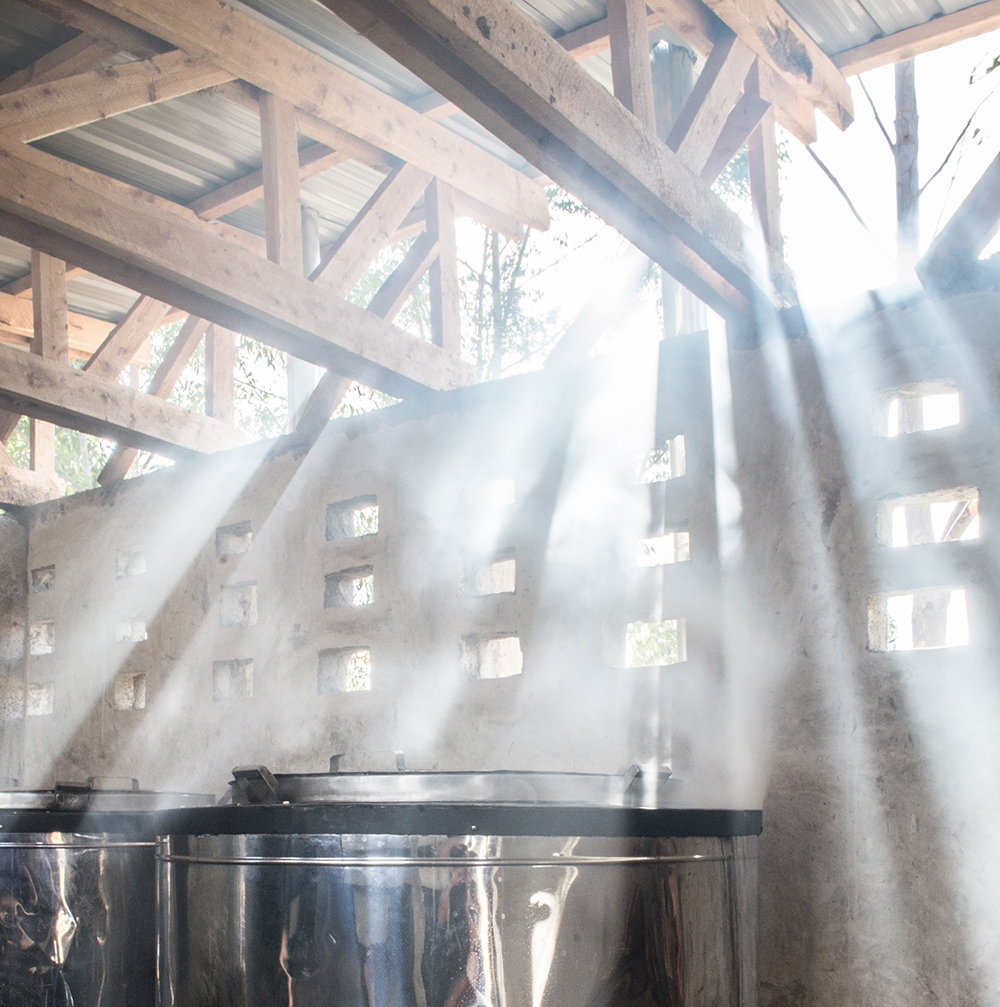 Mary’s Meals
Mary’s Meals is a Scottish charity that prepares and delivers school lunches to over a million children worldwide, who would not otherwise have access to a healthy meal to improve their nutrition and sharpen their concentration during the school day. The Scottish architects Orkidstudio are working with Mary’s Meals in Kenya to design new school kitchens to provide lunches for as many as a thousand children. A non-profit organisation that focuses on humanitarian design projects, Orkidstudio has developed a design template to make the kitchens as efficient as possible, and to enable them to be built relatively swiftly and inexpensively by local workers. An important features is ventilation to draw smoke and steam from the huge cooking pots out of the kitchen into the open air. Each kitchen is oriented to facilitate this process, as are the windows and doors, which also draw natural light inside. Image courtesy of David Fleck. 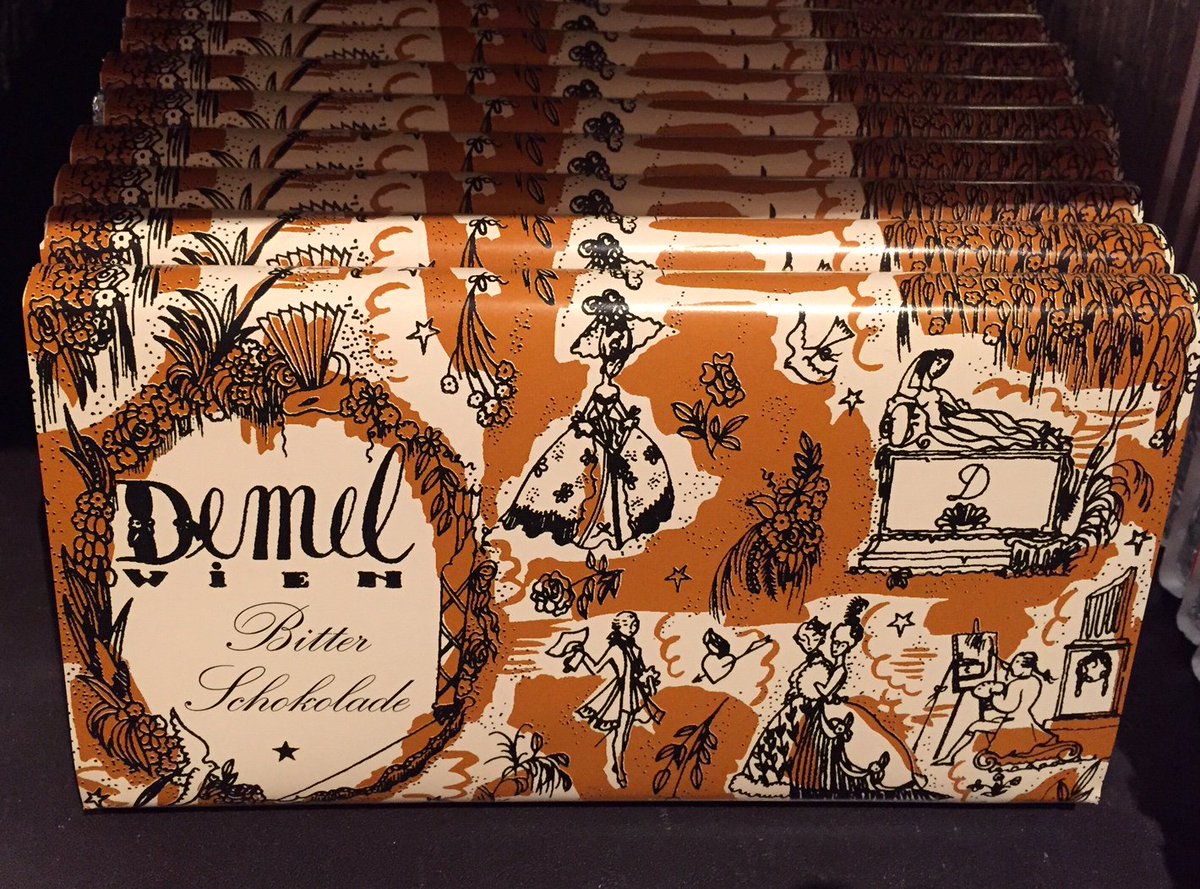 Federico Pallavicini for Demel
One of my favourite places in Vienna is the patisserie Demel with delicious its Sachertorte and beautifully packaged chocolate bars. Those ornate wrappers were designed in the mid-20th century by Federico Pallavicini, a Swiss graphic designer who came to Vienna in the 1920s to study under Josef Hoffmann at the Wiener Werkstätte. Hoffmann took him to Demel, and its owners commissioned him to design elaborate packaging and window displays. Pallavicini fell in love with one of the younger Demels, Klara, and they married in 1936. During World War II, he returned to Italy and then sought exile in New York, where he established a successful design career in the 1940s and 1950s, as art director of Flair magazine and the cosmetics companies, Elizabeth Arden and Helena Rubinstein. When her mother Anna died in 1956, Klara ran the business, and after her death in 1965, Pallavicini took over. Many of his design innovations, including these intricately illustrated chocolate wrappers, are still used by Demel today. 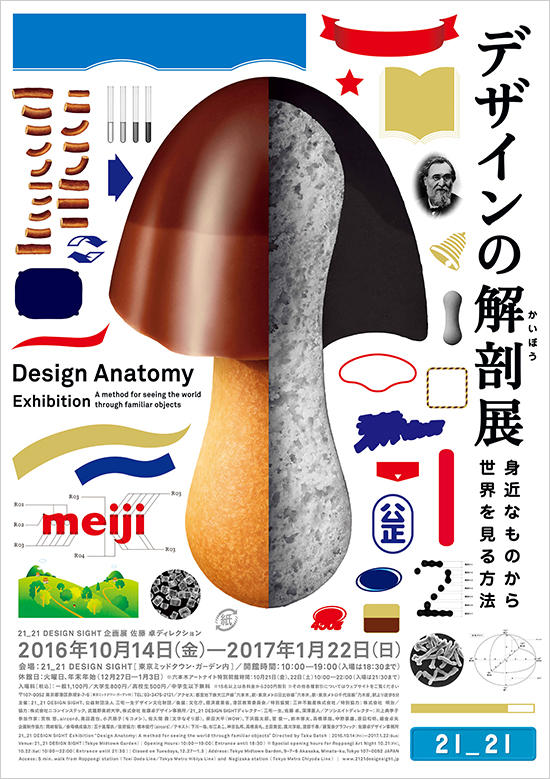 Taku Satoh’s Design Anatomy
What is the role of design in developing a food product, like an ice cream or cookie? The branding and packaging, obviously, and the way the product looks. The Japanese graphic designer Taku Satoh has gone much further in a fifteen year research project of conducting what he calls “design anatomies” of mass-manufactured consumer products by analysing their development in forensic detail. Satoh has curated an exhibition, Design Anatomy, at the 21_21 Design Sight Gallery in Tokyo that deconstructs every element of the design of five products made by the Meiji Dairy Company, including a chocolate bar, yoghurt and milk, as well as an ice cream and cookie. Running until 22 January, Design Anatomy is one of the strangest, most intriguing design shows I’ve seen because of its intensity. Giant 3-D replicas of the products, their packaging and logos are combined with scientific analyses of how swiftly the ice cream will melt at different temperatures and how many spoonfuls of yoghurt are contained in a pot. Satoh also interrogates the history of each product, the employment practises of Meiji and its suppliers, as well as the grasses eaten by the cows that provide Meiji’s core ingredient—milk. A yoghurt won’t look quite the same again. 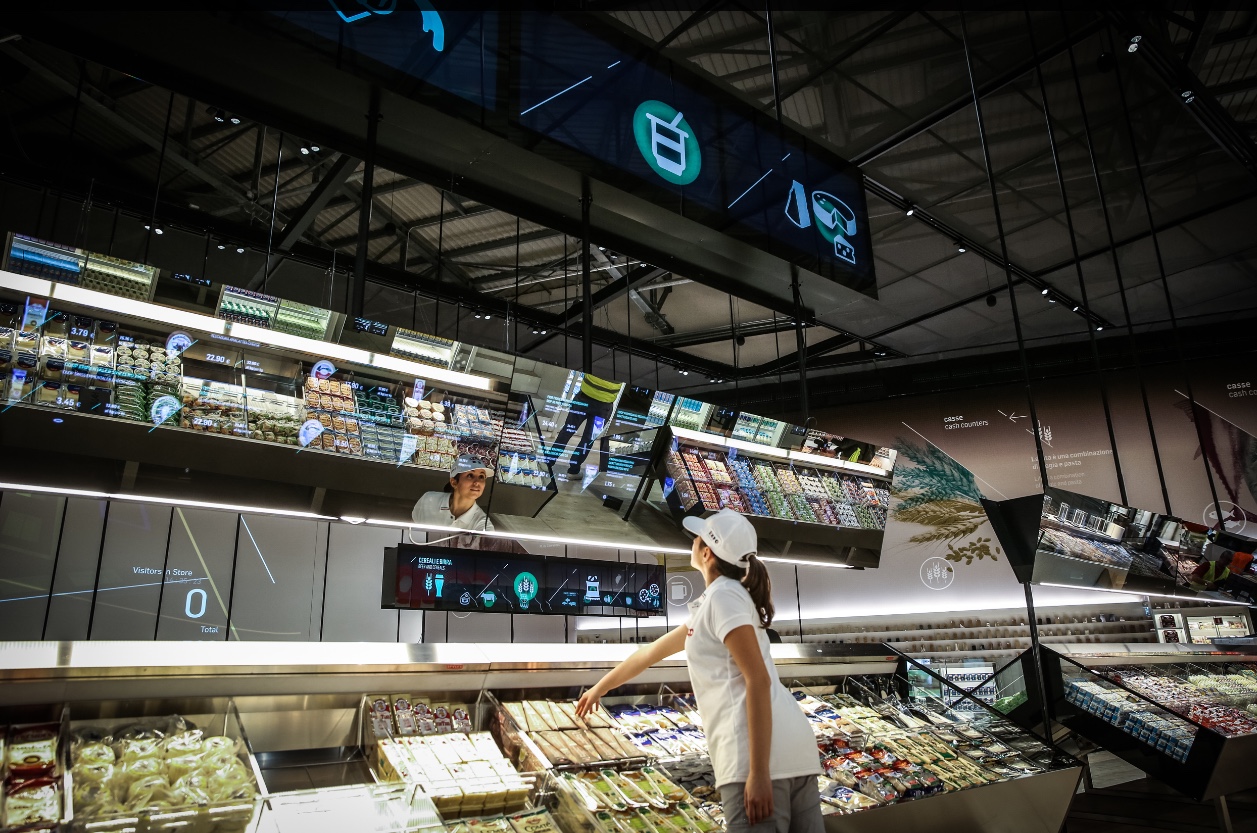 Coop Supermarket
Whenever a shopper in the Coop supermarket in the Bicocca Village shopping centre in Milan reaches towards an orange, box of biscuits or one of the six thousand other products on sale there, details of its nutritional qualities, price, possible allergens, how it should be disposed of and other information flash up on an overhead mirror. The supermarket is equipped with motion sensitive sensors that identify whenever anyone approaches a product, and provides the information they may need to decide whether or not to buy it. More information is emblazoned on a large wall where fifty digital screens relay details of special offers and in-store events. The Coop’s customers could probably find most of this information online, but it would take ages to find it. This Coop was designed by Carlo Ratti Associati as a “supermarket of the future” to demonstrate how we might shop for food in years to come. The first version opened at the World Expo Milano in 2015, and has since been adapted for Bicocca Village. Image courtesy of Microsoft Europe. @crassociati @bicocca_village @coop_lombardia 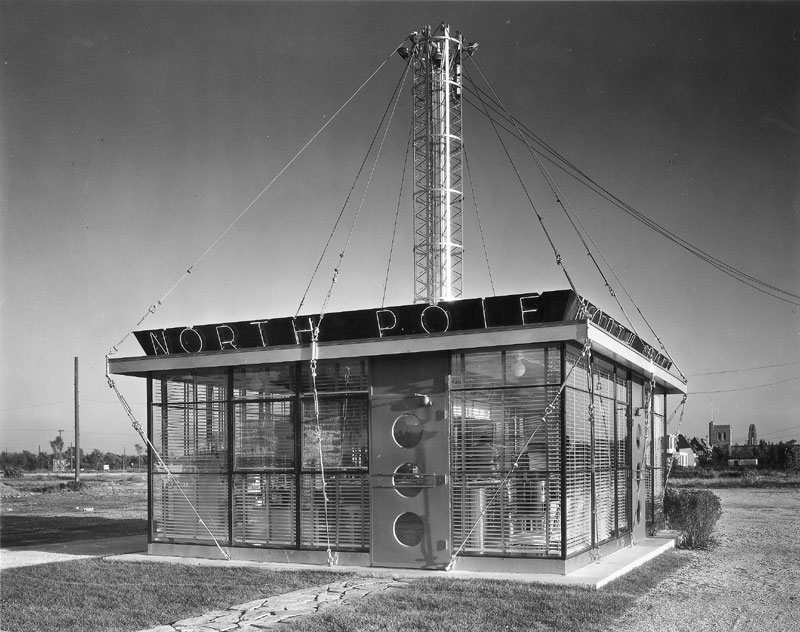 The North Pole by Bertrand Goldberg
The North Pole was designed by the Chicago architect Bertrand Goldberg in 1938 as a mobile ice cream parlour for a chain of ice cream shops in River Forest, Illinois. The prefabricated structure can be rapidly assembled and disassembled in different locations. The concept of suspending the glass walls and cantilevered roof from a mast was inspired by R. Buckminster Fuller’s research into prefabrication. Goldberg then added an entrepreneurial element to the project by suggesting that a small fleet of mobile parlours could be built and supplied by a larger ice cream-making truck. His plan was that they would sell ice cream in Chicago during the spring and summer, and move to a warmer place, like Florida, for the autumn and winter. Goldberg pitched the project to Sears Roebuck, but they passed.

Penguin’s Great Food Series
Each of the twenty slim paperback books in Penguin Great Food series contains a fine example of food writing from the last 400 years, including Samuel Pepys’s 1660s observations on The Joys of Excess, extracts from Alexandre Dumas’s 1873 Grand Dictionnaire de Cuisine and Calvin Trillin’s articles in The New Yorker. For the covers, the Penguin designer Coralie Bickford-Smith drew inspiration from the illustrations of traditional tableware and cookery tools in books on ceramic history and manufacturers’ catalogues. After choosing one object to reflect the content of each book, she drew a silhouette of it for the jacket. For Alice B. Toklas’s Murder in the Kitchen it was a meat cleaver, for Isabella Beeton’s The Campaign for Domestic Happiness a tea cup and for Charles Lamb’s A Dissertation Upon Roast Pig a gravy boat. The design of each object determined the choice of typeface and the decorative pattern used on each cover. The finishing touch is a customised version of Penguin’s corporate logo: a jaunty penguin brandishing a knife and fork. 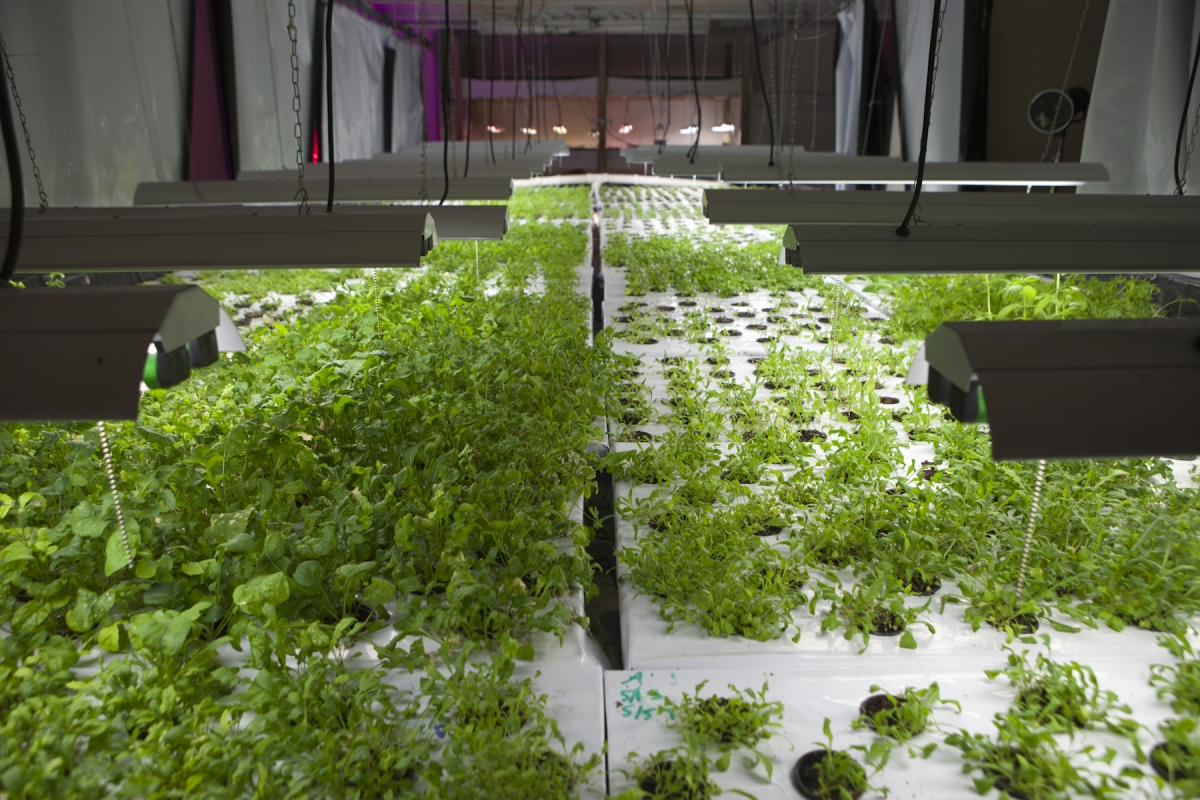 The Plant by Bubbly Dynamics
For eighty years, a lugubrious red brick building in the Back of the Yards district of Chicago was used for meatpacking. After its original owner, Peer Foods, abandoned it, the building was scheduled for demolition until it was bought by Bubbly Dynamics, which has transformed it into The Plant, an ongoing experiment in urban farming and food production. Describing itself as a “living laboratory”, The Plant houses over a dozen enterprises that are cultivating food with energy-efficient technologies, like aquaponics and hydroponics, as well as bakeries, craft breweries and a market. The long term objective is for the waste and energy generated by one business to be used by another, and for The Plant to convert thirty tons a day of otherwise useless food waste from the local area into heat and electricity in an anaerobic digester. As The Plant is a work in progress, some of these systems were designed from scratch in the hope that they will be used in other inner city food growing experiments too. Image courtesy of Be1More.